On Friday Glen, Bill, and I put the fascia on the wye, and painted the base coat in this area. Glens last 2 card holders were installed. A plexiglas protector was put in front of Harbour Freight at Northdale. Some grass was planted in the corner of Lincoln and the turnout for the work train was realigned.
Posted by Larry at 8:40 AM 1 comment:

First I built a LAZERkit Xpress, HO loft barn kit from American Model Builders Inc.  Then I scratch built a small house and added to one side of the barn, covering up one large sliding door location. I replaced the man door below the loft, with the large sliding door and used the man door on a scratch built outhouse. A pile of chopped fire wood was added to the end of the house. A piece of quilt batting was spray painted yellow and put in the loft, to simulate straw.  As this sliding door was left open, a post and beam was added to the interior for visual effect. The structures were painted and weathered.  A wagon, fence, junk and other details complete the scene.

It was a dark and stormy night, but still many members showed up.  The cold snap did take its toll. A hand laid section Of track, on a trestle went out of gauge and a section of curved track lifted up, both were repaired by cutting out a small bit of rail to relieve the pressure from expansion. Jim started to program the Wellington turntable.  Bonaparte Wollen Mill was renamed Heinz Co. to allow form more variety in traffic. Bill finished his bike shop and is working on other buildings for this corner.

Nice to see Cliff back after having work done on his knee and hip. Turnouts at the cement plant all installed and wired up. Town name plates were installed and Bill added a plexiglas protector for his cycle shop and railroad hotel area. One track of the double siding by Buckley Mill will become a piggyback ramp and one track at the corral in Lincoln has been modified into a team track.  The turnout for the upper loop has been wired, no more reaching over the buildings in the harbour. Several changes were talked about. First there should be a crossover to the coal dock lead in Miller, second there should be a crossover added to the upper loop, and third the switch to Wellington, on the upper loop should be moved out of the tunnel. Lots to keep us busy.

The last couple of weeks have seen a lot of work done on the layout. Turnout work at the cement plant is on going. Running power to the upper loop snap switch has started, but a higher amp transformer is needed. Parts of the wye and some of the new turnout area in Lincoln has been ballasted. One corner of Lincoln is getting a rework and the removed buildings will find a new home in Northdale. Coal barges have been added to the coal dock. The cold, illness, and vacations have depleted our workforce, hope to see these members back soon.

Several turnouts are causing engines to stall. We have started adding more feeder wires to the 2 center rails so that the points are not the only source of power. Any new turnouts will have jumpers from the outside rails to the matching inside rails. 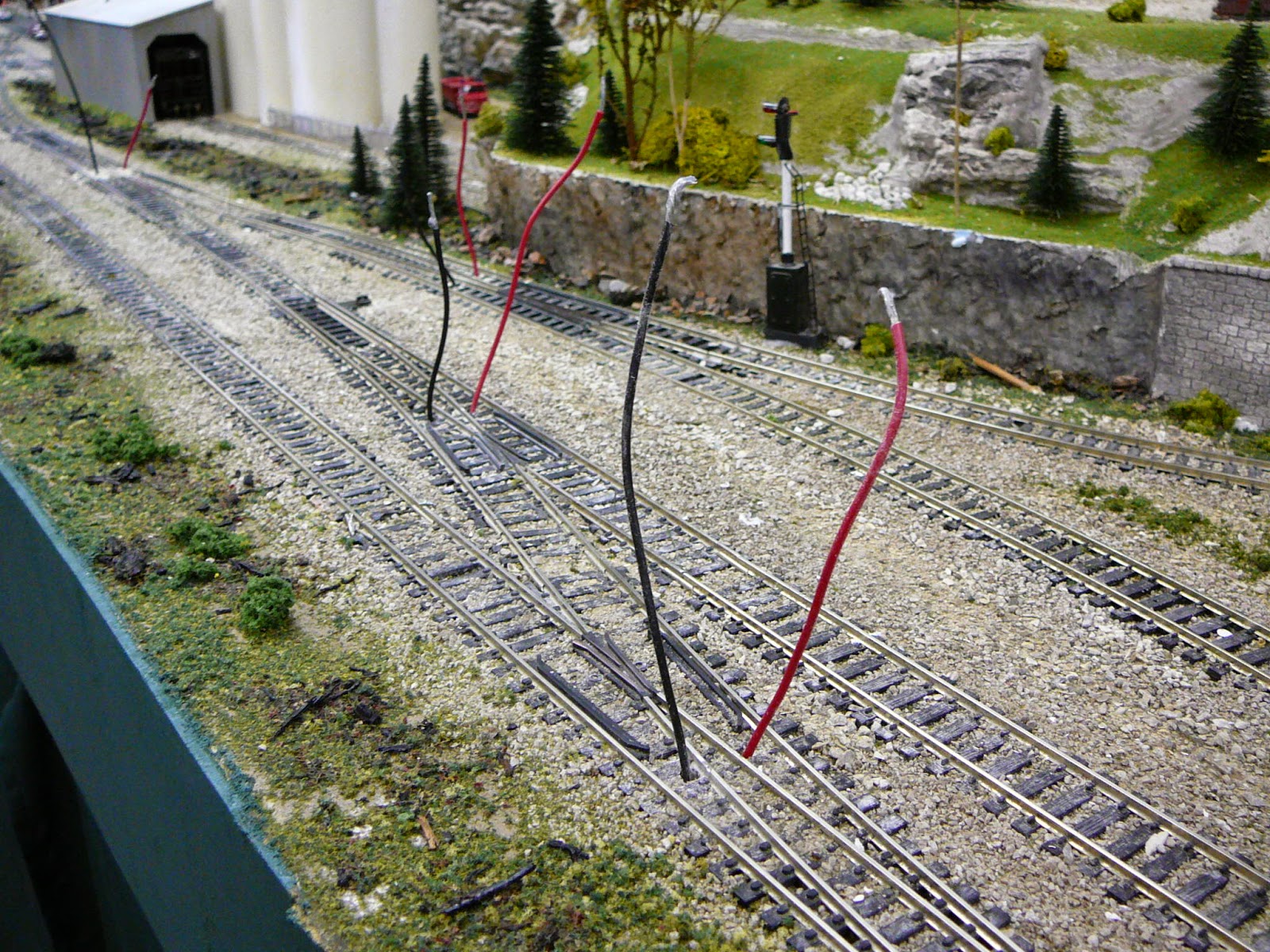 After removing the car float and it's dock, we decided to put in a coal dock to replace it.  The roadbed had to be raised to the height of the coal dock and new scenery applied.  The coal dock was designed to take 3 coal barges on each side, and 4 hoppers can be unloaded at a time.  All of the wood needed for the project was weathered with a mixture of India ink and alcohol. A piece of grid paper was taped to a ceiling tile and 2 strips of upside down masking tape was laid down to hold the posts in place for gluing. The height and length of the dock was drawn on the grid paper. One of the upper stringers was used to help line up the posts at the correct height. Then that stringer and a smaller one were glued on to the posts.  Two rows of posts were made with the stringers on the right side and 2 on the left. The bin to hang below the dock was drawn up and cutout to fit and glued between 2 rows of posts. Cross stringers were added at both ends and then the deck of Northeastern scale lumber, 1/8" scr. was glued on, leaving a slot for unloading coal into the bin below.  Chutes were made and gates were glued on.  They are operated with a pulley system, operated from the cross decks at the barge level.  It was painted and weather.

This is the unofficial history of the Huff and Puff Railroad. The facts I have presented are almost truthful and I standby every lie, poke,and innuendo. I take full responsibility for everything people like and none for the rest, enjoy.
The H&P is a small, successful little railroad, moving into the diesel era. Most of its revenue is from hauling coal and iron ore, with lumber, cement, oil and grain broadening it's financial base. This wasn't always the case, but an opportunity always seemed to presented itself.
It all started in the cellar of Oxford Miniatures, when Don the CEO of the Ontario Western, said management thought he might have to close down the railroad due to unexpected overruns building the tunnel through Mount Tom. This tunnel, by Smith Construction, was built to reduce the grade for coal trains between the Valleyview coal mine and the power plant near Heron's Landing. He and his cronies from Wellington had the idea that if they could raise the capital to lay tracks to Miller which had an abundance of lumber to ship, the railroad would gain needed revenue. They would also extend the tracks west to the city of Wellington, thus creating a cheaper way of shipping their own products out.
An agreement was reached where Don would sell the Ontario Western Railroad, for stock options. The OWR would then be use as collateral, to form the H&P Railroad. As it happened, Doug McLean, at the time, was also looking for a venture to invest his profits from Oxford Miniatures as a tax relief. Another local business man, Don Stoddart, the silver fox, knew a good thing when he saw it, and as it happened a friend, Hank Duivenbode, of the abandoned Innerkip Railroad was looking to divest the remaining equipment, so the time was ripe. Hiring Owen and Associates as accountants and chief financial advisors, high value bonds were sold to 16 investors and loans were secured. The tunnel to gain access to Wellington, though short, was going to eat up most of the bank account. This might have derailed the whole plan if iron ore had not been found near Ortona.
A new merger was made with the Cimmeron mining group's owner Ralph Taylor. They needed to extend the tracks from just west of Northdale to the planned location of the mine. But that was only part of the picture. The ore needed to go to Elsewhere, which required yet another tunnel, the good news was that the mine would take some time to be built allowing for the new railroad to make some money as well as to pitch for more funds from the group of 16. Completing the line to Wellington would have to wait. In the mean time Brinker built Buckley's Mill in Lincoln its rumoured with money from his wife's family. Doug McLean also opened a new Kentucky Fried Chicken restaurant in Lincoln and has started to dig the foundation for a bus terminal there. Both of these gentlemen and the rest of the group of 16, agreed to by bonds to help finance the tunnel to Elsewhere. To improve traffic flow, the tracks at Springbank were rerouted to make the coal drag a straight run through town, which split the CNR into 2 branch lines. There was some talk that the B&O was going to buy the line to Sunset but that never materialised. The run around in Jutland was also lengthened to allow longer trains to pass each other, increasing traffic flow. Local business took advantage of the inexpensive shipping rates, such as Cliff's Junkyard, which started shipping scrap to the harbour and the improved shipping of furniture from Jim Long's factory gave him the funds needed to expand the harbour at Heron's Landing and install a large cargo dock and crane there. Other Investors weren't taking a back seat. Matt Gilespie built a oil dealer in Jutland and Glen McDonald built a cement distributor as an outlet for gravel from his Oxford Sand and Gravel pit, but his eyes were on the expansion to Wellington were he planned a large cement plant. Pressure was also coming from the joint venture of Long and McDonald who had built a stockyard and meat plant in Lincoln and needed access to more customers and suppliers, Rod Blonde from the Western Cattleman's Association, was also eager to bring passenger service into Wellington and John Wright, the oil Barron, owner and builder of the new refinery in Springbank held promissory notes to fund the project . Fox construction was commissioned to supply material and labour to build the cut and the tunnel and also lay the tracks into the cement plant. Further   Improvements to deal with a serious bottleneck shipping ore and log cars to Miller by an old car float system solved its self when it's owner, Stoddart Inc. was ready to sell. Getting out of that contract helped cover the costs to extend the line from Miller to Northdale. Bill Simmers, who is said to have built most of the town of Valleyview, travelled over the new line to Northdale he noticed an opportunity. He immediately built Harbour Freight and a large cargo dock in Northdale's sheltered bay. The removal of the ferry dock in Miller meant a coal dock could be built there. The construction of the wye west of Miller made the small turntable there redundant. After its removal, a coal dealer and oil distributor took its place. The railroad continues to move forward, the Fox turntable and round house has been augmented by the Reinhart diesel shed. Wellington now has a airport with a new station being built. Turner is running trials on cabooseless trains, and leased motive power from various Railroads is the norm. In the mean time the railroad just keeps chugging along.
Posted by Larry at 10:49 AM No comments:

Feb. 3. The first business/construction night was a great success. Jim got a lot of work done on installing switches at the cement plant. A bad switch was removed at Lincoln and a snap switch was installed at the start of the upper loop. The track at the coal mine switch was re-aligned for better performance. We started installing some missing feeders and scenery was started on the wye. Glen's card card boxes were installed, and Trent's mother found out he knows how to vacuum!