Scenery was worked on at Heron's Landing, the coal mine, and Lincoln and all the while trains were running.

I had some free time (read my wife went shopping) so Bill and I went up to the Huff and Puff do some work. The outside edge of the curve around Lincoln was ballasted and edged with grass and weeds. Many plank road crossings were added where roads had been added, still need more though. Bill cut down a rock outcrop with a hole saw, which was too close to track. He also found a switch which was giving trouble when you back through the diverging route. We finally found that the point was too wide and was catching the wheel flanges, lifting them ontop of the rail. The point was rounded off and thinned down with a file, eliminating the problem, will have to check the other points for this problem. A few other switches were found to have ballast interfering with smooth operation, this was also corrected.

This is really an update of Tuesday, Sunday and Thursday. Wiring of the roundhouse area continues as well as additions to scenery. The fascia is now all installed but the plug ins holes need to be cut and transitions between different heights need to be addressed, some gaps between the fascia and the scenery need to be fixed. A couple of members have been testing the rails and cleaning up problems as they go. Glen has added new buildings to Heron's Landing, a ship also sailed into port. New rolling stock has been brought in as well as a group of engines, it's alive, A test application of a grass mat held down with double sided tape was done at Lincoln. Ground cover and roads were also added there. Glen tested and verified that you can programme an engine on NCE and run it on Digitrax. The following pictures will speak for themselves. 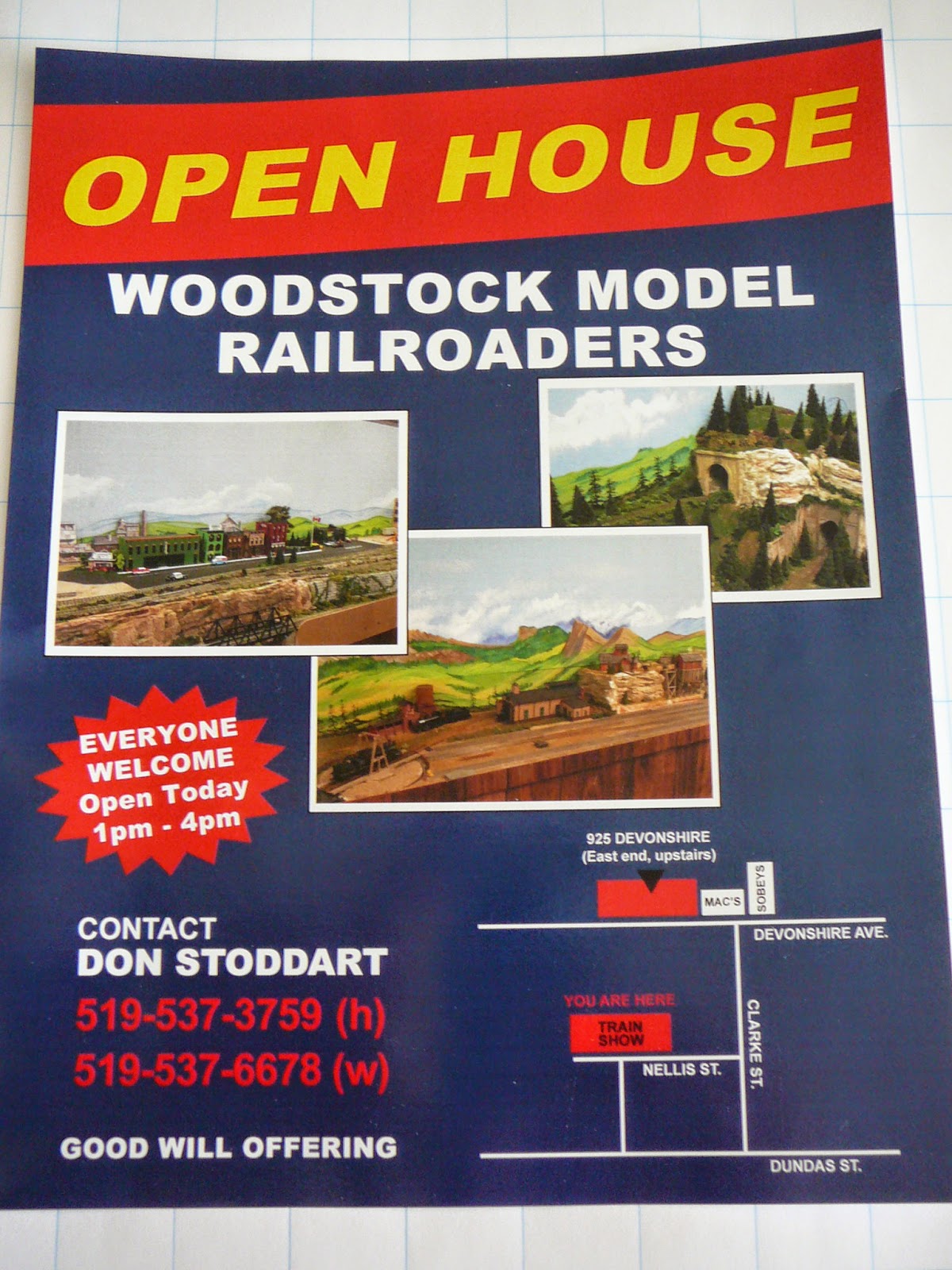 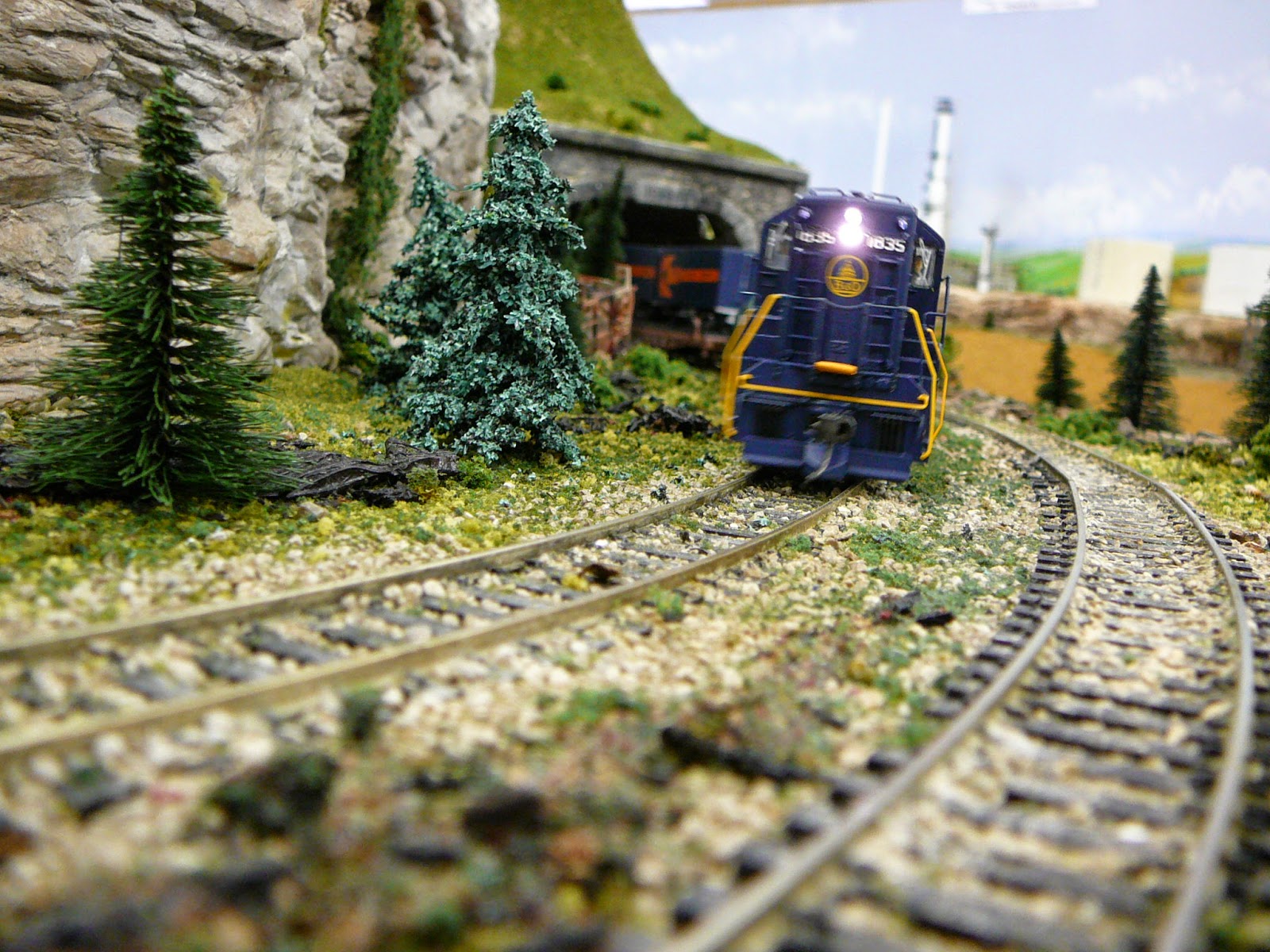 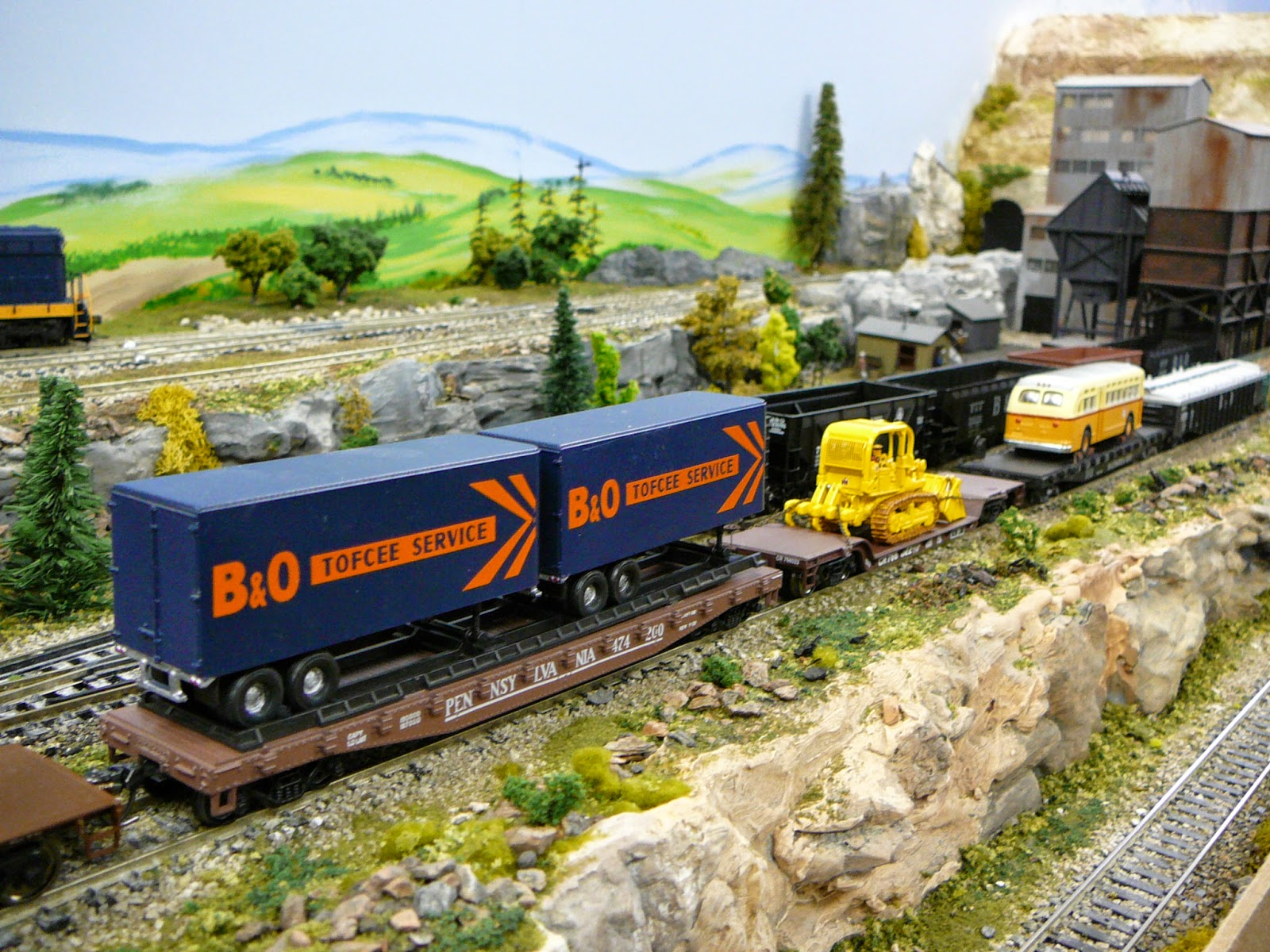 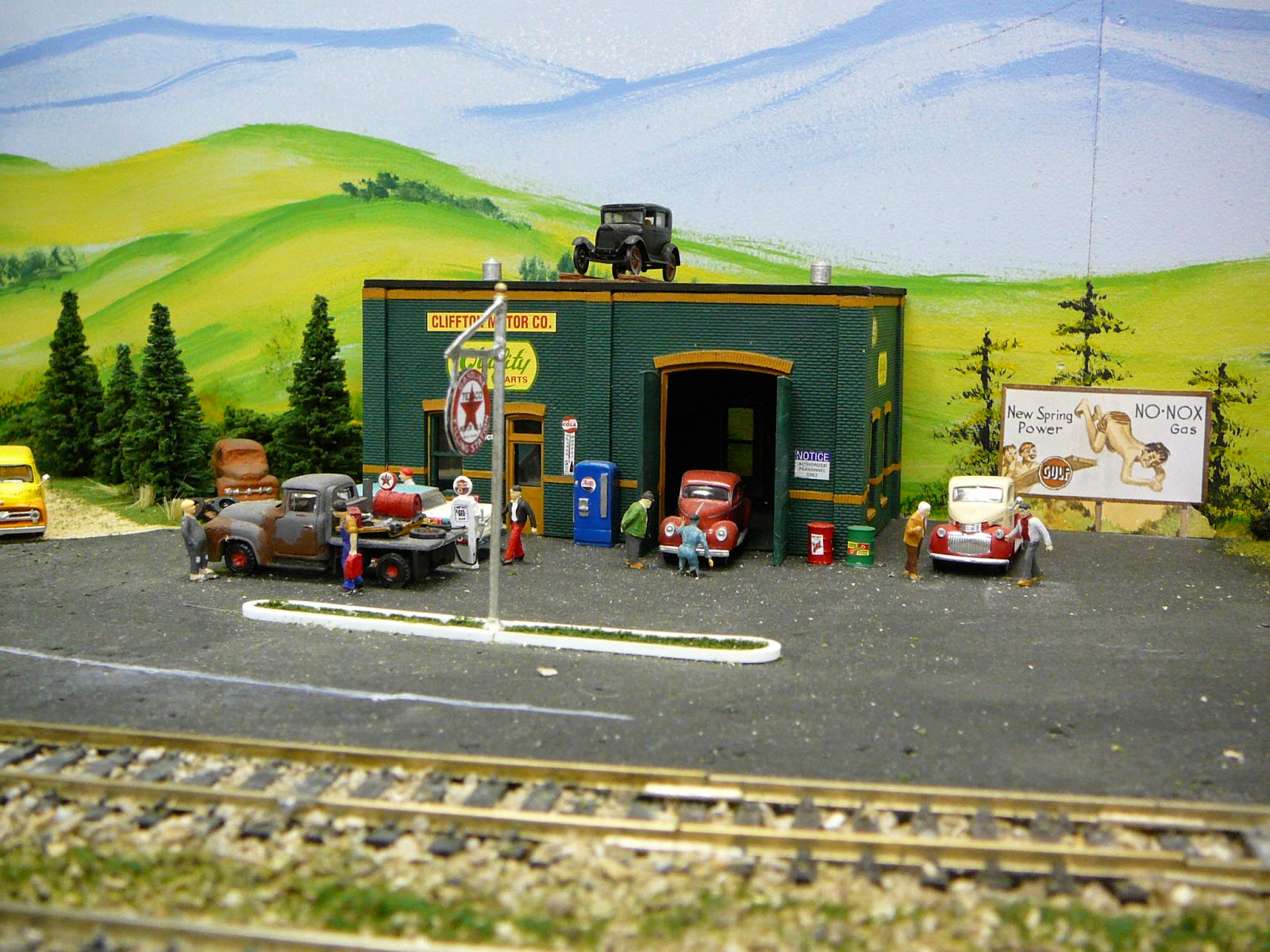 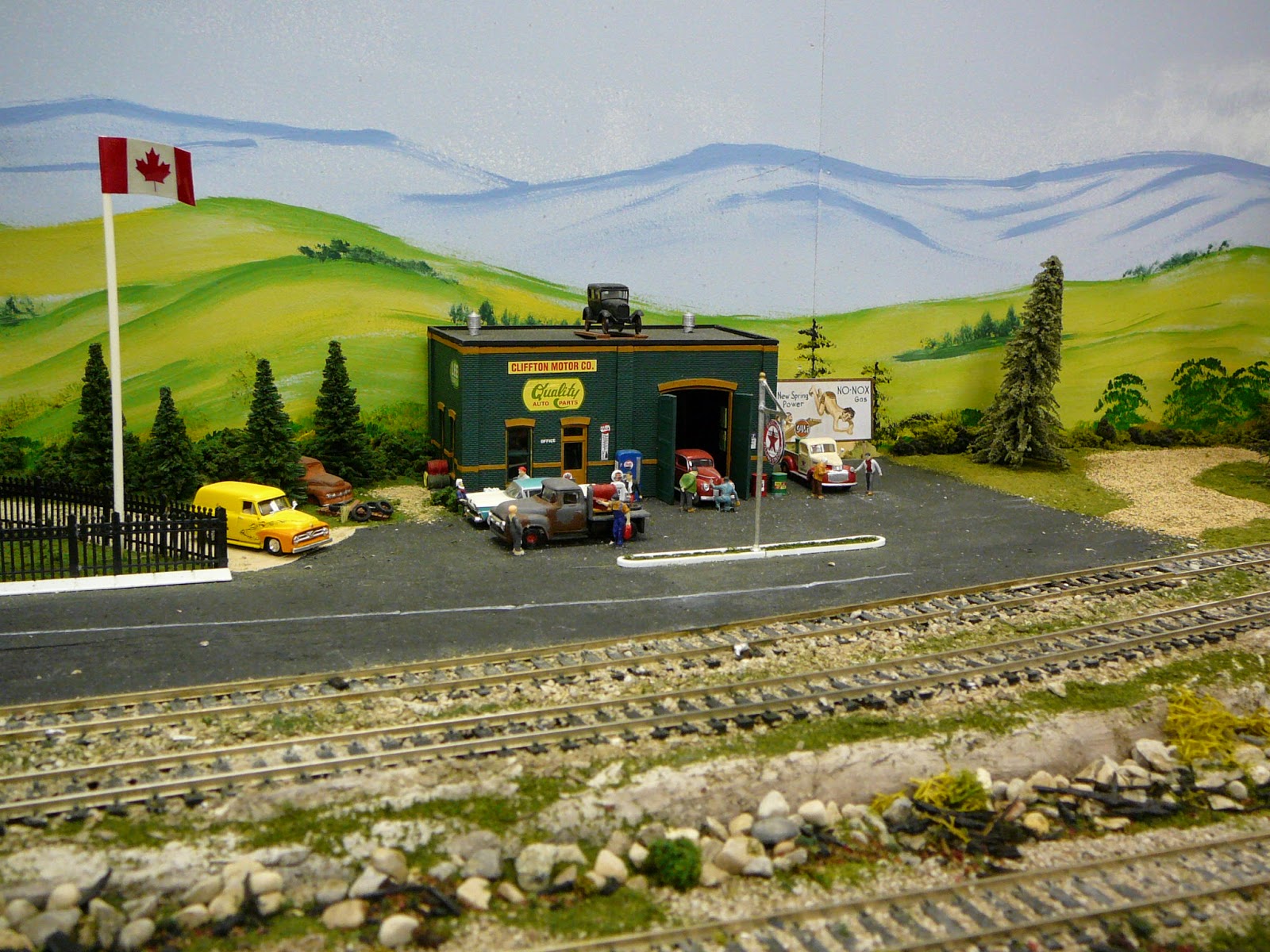 Ralph asked me to go to the Credit Valley hobby shop in Mississauga. Looking around in the shop, I found a garage kit by DPM.  Looking further, I found some gas pumps, so I decided to make a Texaco gas station for the town of Valleyview. First I cut out the big garage doors, assembled the kit and painted it.  A ramp was added to the roof on which I put a 1947 Model A Ford. A 1958 Ford Fairlane and a 1947 Chev pickup (with a Texaco logo) were also added to the scene. Removing the box off a 1956 Ford pickup, I made it into a flatbed.  Various items were added on the flatbed to finish it off.  A 1934 Chev was placed in the doorway.  A man with a beard was painted up and sat on a box (editors note, he looks an awful lot like Bill). Next I put a dog on top of a doghouse. The dog was painted to look like a Dalmation and named Pete (see the name on the doghouse ). The doghouse and the man were placed in front of the garage along with other people I had painted. Grass, trees and some barrels were also added to the area.  Detailing of this project is ongoing.
Posted by Larry at 9:16 AM No comments:

While scenery is still being worked on, the layout came alive as members ran their engines, testing out the track. We had a rare meeting to discuss next years dues which are set at $100.00 per year or $10.00 a month and our first open house to be held from 1 to 5 pm Sat. Oct. 19th. which is the same day as the Woodstock Model Train Show. We will have pamphlets at the show, our layout is located on the east end and on the second floor of the Scheltema Trailer building, former Timberjack/John Deere location, 925 Devonshire ave. just west of Sobey's. We meet Tuesday night from 6 to 9pm. During this summer we have also worked extra hours on Sunday from 9 am to noon. 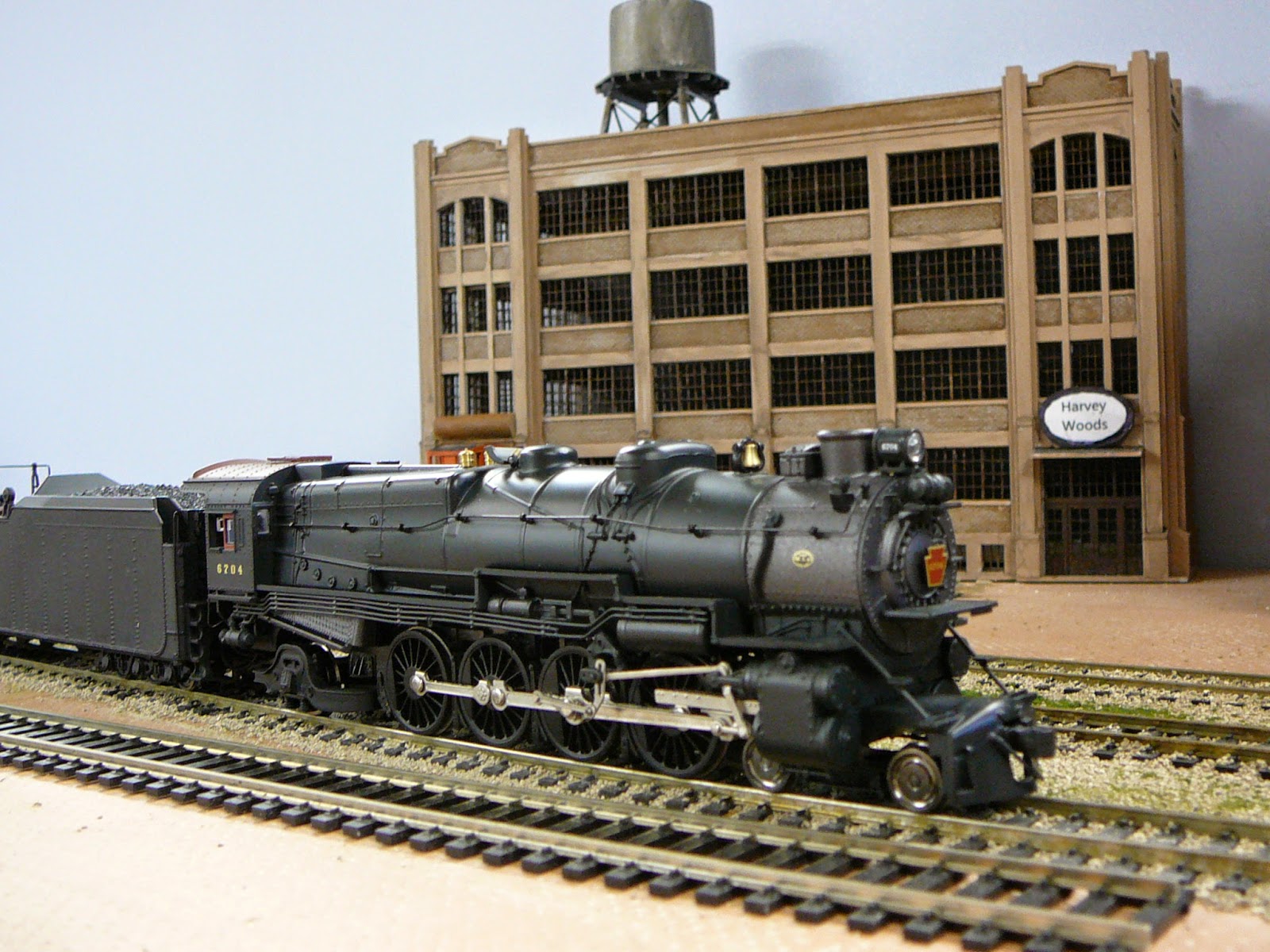 A couple members ran their engines until the system started beeping, not a good thing. The track was checked for metal objects, bad gaps we even tried throwing all the switches. Then we started to unhook the bus wires to the blocks that indicated shorts, ahah, one screw on the terminal block was not tight. A whole hour spent because of a loose screw. A scratch built spar tree was positioned, then John repaired the scenery in the area. It still needs painting and all the lines need to be attached, after the glue dries. More work on the drainaged ditch and the scenery on the lower loop occupied Don and Bill. An ice house was also installed, the building is a card structure.


The great thing about model railroading as a group is that you get lots of input, well maybe not always so great, but I think it makes us better modelers and thus, the railroad better. Case in point, the original track plan was marked on the top of the tables and after a change to the track arrangement into one end of Jutland the lines were visible on the table top. Matt pointed out that we could put in an abandonned line, so we did. When Don was adding scenery to this area last week, he thought a culvert under the new track and the remains of the old trestle over the ditch was in order. So at least 3 people had a hand in the end result, right next to this, we may add a crane and new steel beams to make it look like the old wooden overpass is being replaced, two complete stories in two feet of space, for those who stop to look. Elsewhere, the quarry gets track work, Heritage Furniture area has more scenery added, another lumber dealer is added to the layout and Heron's Landing gets a small town. The electrical fault on the the branch was corrected and the turntable is up and running. A track fault near Northdale on the branch was worked on.
Posted by Larry at 9:25 AM No comments: