Mike brought over a cad drawing of the benchwork design. I penciled in a rough track plan and added sticky notes comments to it. Already for the members to discuss it. 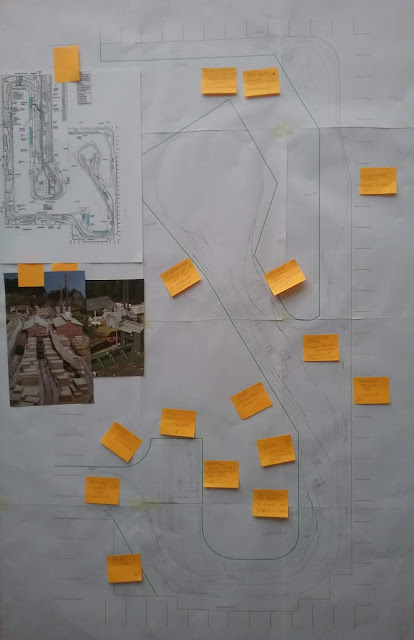 Comments about the plan

To paraphrase Mike, he thinks the old Northdale corner has too much  trackwork, less is more. I would like to see what the area looks like after we rebuild the upper mainline. The couple of inches difference in elevation may be enough to break it up, much like the Cement Plant area. I put all that track in to help with train movement, but I guess we could remove 1 of the passing tracks on the branchline.
If we take off the corner where the station is in Lincoln, Ortona can be rebuilt much as it was, with the ore mine moved to the left, eliminating the turntable, engine house and coaling station that was at that end. One or two of the yard tracks there would be to stage branchline trains. This would cause branchline trains to be dispatched from there, as Glen has suggested.
The Lincoln station can be moved between the upper mainline and the branch line headed to Miller, serving both lines as Don suggested.
The gravel dock and sawmill could be fit into the lowered end of Springbank,  and be part of Lakeview.


think i would suggest three changes.  One. Leave Miller out.  Just scenery, single track no passing siding.  Two.  Move the branch to the front of bench work at Lakeview and put the village buildings between the branchline and the lower mainline.  Three.  As we discussed take out the grains industry and expand the saw mill to include a slash burner, a drying kiln, large piles of cut lumber...

I like what’s been laid out concisely in Comments about the Plan in Friday’s blog; moving Lincoln station; establishing Ortona more to the left, etc. although I would like to see a turntable retained, not necessarily the one there. Mike may have a point about too much trackage in old  Northdale corner.
Glen

Mike and I measured the Lincoln area and Mike laid it out on a cad program. I loaded it into paint and added trackwork, black for the mainline, red for the walls and 1 foot grid marks, green for the benchwork, Blue for the branchline and orange for the logging spur. I did not include  the sidings in Lincoln that are not changing. Included are suggested bench work revisions and major industry placements. 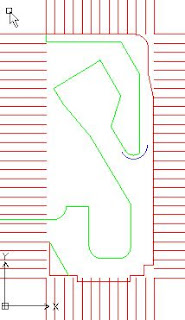 Benchwork plan. Mike has indicated he may be able, with help, develop a complete plan of the layout with layers for electrical, etc. 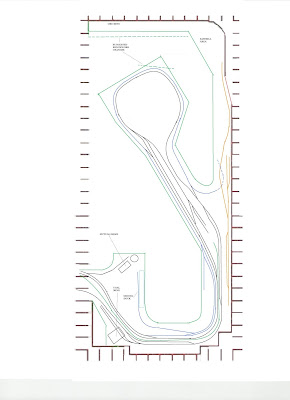 Suggested track plan. Note connection to the branchline loop around Lincoln, making the inner mainline loop a switching lead. There is a passing siding between Springbank and Lincoln, and between Jutland and Lincoln. The branchline town of Lakeview would have a few industries and the gravel dock. None of the Miller track was drawn in as that will happen after the mainline is completely functional.
Feel free to draw up your own design. The benchwork at the old Northdale corner will be 30 inches deep to accommodate the new town of Lakeview. The benchwork in front of the exit door is deeper, but just for scenery around the mine with the turnouts in the 30 inch area.
Posted by Larry at 11:08 AM No comments:

Nice to see Joseph and Glen at the club last night. We also welcomed Larry in as a new member. He has jumped right into the fray. We continued dismantling the coal mine end of Springbank, cutting off most of the background in this area and cutting in the new route for the lower mainline. At the same time discussions continued on just what the new areas may look like. Moving the Lincoln station to the old Mount Tom area with the upper mainline in front of it and the branchline behind it, so it services both, seems like a good idea. Moving the turnout joining the branchline back to the upper mainline, on the back side of Lincoln, or removing all together was also talked about. We decided that putting a small portion of the loop to Miller in a tunnel would give us access to the turnout at the logging spur. The triangle area behind this loop may be the site of the lumber mill or be used to blend in the scenery in this area. We do seem to have lots of area in Miller to accommodate it. The coal mine would seem to be better located on the exterior wall behind Springbank which means we will have to find a new location for the ore mine, perhaps in Elsewhere or where it was on the cupboard bench, but more in the corner. After we remove the last of the table top material in Northdale we will start rebuilding the upper mainline. 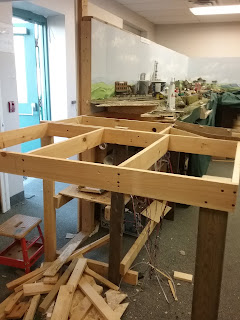 The new lower mainline area at the end of Springbank, the exit door has been turned around so we have lots of room in this area now.
Posted by Larry at 7:43 AM No comments:

Great to see Glen up at the club amidst all the construction. His thoughtful insight is always welcome.
After Lincoln was elevated about 3 inches it was moved into place. The group gathered around to discuss the best position to set and attach Lincoln to the existing branch line benchwork. Being able to reach the turnouts on the logging spur was an obvious concern. The corner behind Allen Lumber was cut off leaving room for the branch line and to leave ample room to operate the branchline. Then an angle was cut off Lincoln where connects back into the Northdale area. It was decided to use the old turnout to the branchline and  run it parallel to the upper mainline until it loops off to the new town of Miller. It looks like we have Lincoln positioned where we want it, so now the rebuilding can commence.

Tuesday night where is everyone?

Well with Don, Mike, Joseph, me and a new, could be member, Larry we went to work. The quad unit was unhooked from Lincoln by cutting off some feeders. After locating the end of the bench work we remove track in the area. The scenery was cut and the benches unhooked. New legs and braces were installed. Then came the big move. Easy as pie. Left it sitting in the approximate location until next week. Humm, Larry has a pickup. Loaded all the garbage in it. I'm casting my vote for his membership right now! Thanks a lot. 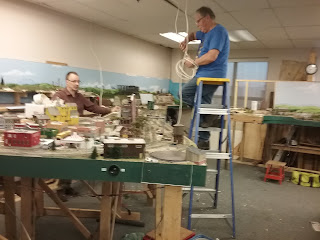 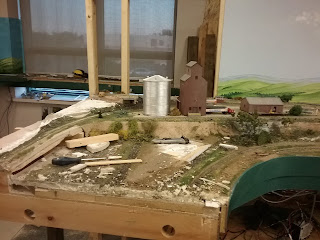 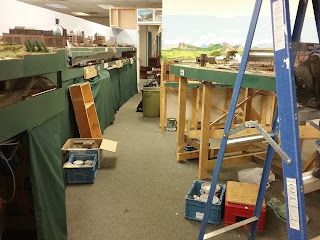 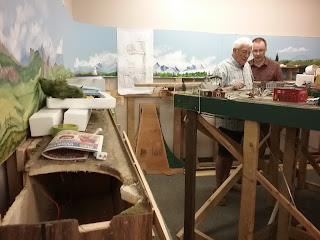 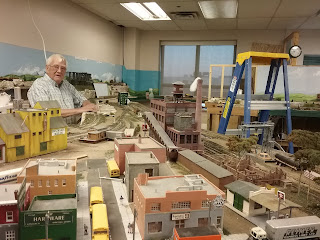 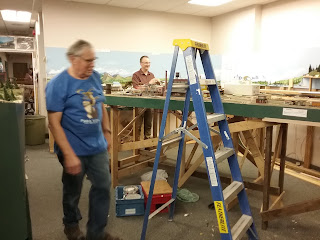 This is a simple outline of what the new track plan my look like. 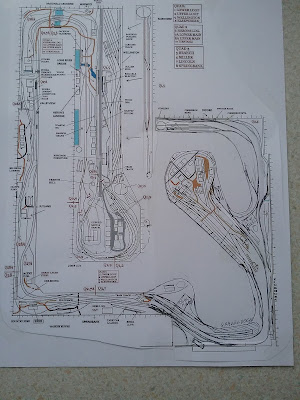 In this concept the coal mine, Mutual Grain and gravel dock are located in the bottom right hand corner, creating a small town. The area to the right of Lincoln can be developed into a harbour or a small town with the old Ortona bench being an interchange. This would cause more traffic on the branch line. This interchange could also be part of another line switching the town of Wellington and returning to the interchange. In this case we would need to connect the branch to the upper mainline at the sawmill curve, creating a Wye, which could also be used to turn branch line engines.
Posted by Larry at 4:24 PM 1 comment:

After a before the meeting, group talk 2 things were decided. We will cut off Lincoln at the turn to Jutland, some where past Union Ice. The curve will lead into the new lower mainline where Northdale was, and all of Lincoln but the Hay Co. Siding will stay intact. The area where the coal mine and Mutual Grain will be lowered to the height of the lower mainline and switched from it. This will allow the lower mainline to curve around the new end of Springbank in the open and not in a tunnel or a gully. Then at the meeting, because it will speedup construction greatly and end up with a better result, it was decided that we should move Lincoln next week which, with a small amount of wiring, will limit running to dead end runs from Wellington to Springbank and from Elsewhere to Jutland. Lincoln will be raised 2 1/4 inches to the height of the upper mainline at Springbank and new bracing will be added, before we swing it. The new lower mainline will descend to Jutland. Clean up and prep work continued after the meeting. 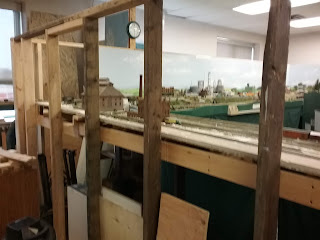 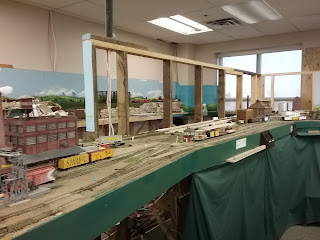