Started out by setting up the sawmill complex and the gravel dock. After agreeing to the layout of these structures we went back to grading the lower mainline. After some adjustments to get the grade between 1.6 to 1.8 % the road bed was added. The area under the gravel dock was lowered 2 1/2 inches so that there will be a straight run to the track coming from Jutland. 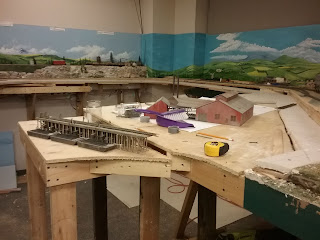 Power and a shelf were added under Lincoln for a quad unit and it's power supply. As there is an unused terminal on this quad we decided to split the branchline into 2 sections.
Up for discussion, to simplify the trackwork and add more elevation separation between Lakeview and the lower mainline, we could remove the connection to the lower mainline near the sawmill. This would allow all of Lakeview to be lower. However this would mean you would have to back out of Lakeview to the turnout at the east end of Lincoln to get onto the lower mainline to continue on to Elsewhere.
Posted by Larry at 9:59 PM No comments:

Well the end is in sight, at least for the mainline. The benchwork for the lower mainline was installed with temporary bracing. Once the correct grade, 2% or less, is established the bracing will be made permanent. We have a run of about 20' and a rise of 3" so that would be under 2%. That works out to about a 1 inch rise in 6 1/2'. We also want there to be a difference in elevation in between each of the 3 levels, in this area, to help visually separate them. This may require that the grade changes throughout the run of each line. Once the correct grade is established the roadbed and track can be added and wired in, thus completing the mainline and trains can run again, WOO, WOO!
Work on the branchline can continue while people are running on the mainline as it is on separate feeders, although the ability to use the branchline through Lincoln will not be available while soldering or ballasting is in progress. 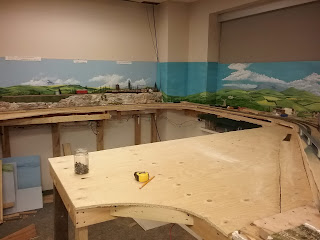 Hard to see the new benchwork as it is only 6" or less for most of it's length. The large area in the foreground is for the sawmill. It may be big enough to hold the gravel dock also, maybe more. I want to see if the gravel dock will fit, running from the bottom right of the picture, at an angle across the table through the tape measure and bottle of screws, with the water to the left of it.
Some of the background was also replaced.
Joseph installed the new power cord and power supply under Herons Landing.
Posted by Larry at 9:23 AM No comments:

The sawdust shed is complete except for the collector pipes. 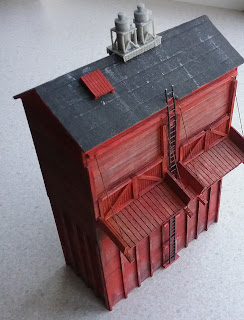 Used 1 of David's collectors on the planing mills boiler house. A collector pipe was made from a sprue. This pipe has reinforcing on it in the pictures I have seen. This assembly was painted grey, after all the parts were glued together. 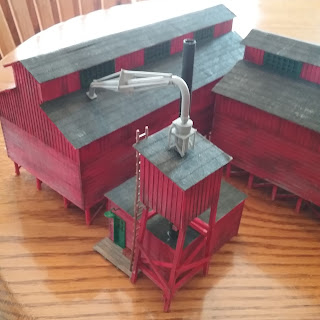 I guess the chips from the planes are sucked into the elevated storage bin and fed into the boiler fire box.
Posted by Larry at 7:33 PM No comments: 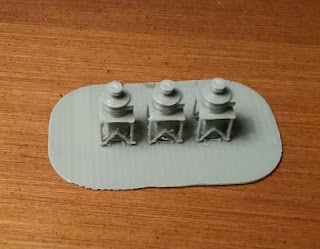 Nice job.
Joseph was installing our new booster when he found the cord it was plugged into did not have a ground wire. It will be replaced.
Posted by Larry at 9:21 PM No comments:

The discussion at the meeting centered around electronics. Our new booster is in and it and the other 2 we have provide 5 amps max each. Engines need 1 1/2 to 2 amps. That's with sound on. So only 3 to 4 engines per booster. At times we are running too many on the layout. Maybe we can feed different areas from the same quad instead of daisy chaining 1 quad to adjacent blocks. We my also need to limit how many engines can run at one time.
Meanwhile feeder wires were being soldered to the new upper mainline, 4 on each turnout and a set of feeders on every section of track.
Posted by Larry at 9:31 PM No comments:

My order from Tichy Train Group 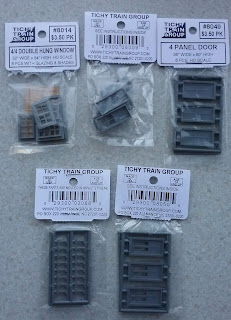 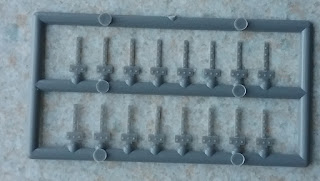 Nice detail and will fit perfectly, they are actually for box car doors.
Posted by Larry at 9:36 AM No comments:

Found this on a Facebook group called Model Railroading. It is from the Coachellla Valley Model Railroaders, in a post titled Tugboat Tuesday by Alex Gregg. 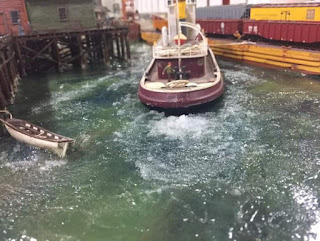 Nice water colour and the prop wash and wake are very well done.
Posted by Larry at 7:41 AM 1 comment: