As Glen added people around the new sections of the layout, Rob ballasted the back track of the Ortona yard. I added some trees around the sawmill and plastered a joint in Ortona' s backdrop. Then Larry and I put up the curtains. 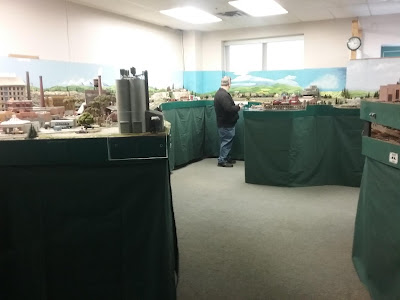 And then half the lights went out, must be working on one of the panels.

Where have all the box cars gone? At least 3 industries were missing a box car, a couple of staged trains were not only short a box car but also didn't have the proper consist? Found 2 box cars on a staged train in Elsewhere, and a train staged in Elsewhere without a train order? Well there are the missing box cars. So someone made up a train by taking cars from industries and staged trains? Once this was a fixed, the session went quite well.
Our newest member John, ran his Bud car around the layout as he got more familiar with the layout. Glen repaired some coupler problems and some more scenery.

Looks good, everyone was impressed. 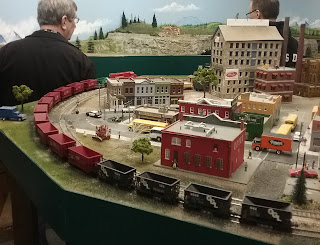 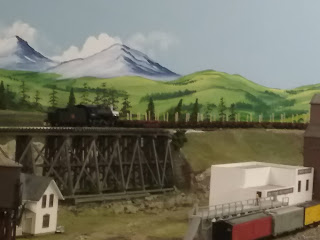 Rob little steam engine pushing the log cars up the grade to the logging camp.

I noticed some confusion understanding the new Train Orders. After all the time off because of the construction, this is understandable. So I will try to explain them.
One operator had a refer in his consist (At least he checked it) but there was no switching move for it, on his east bound freight. This is because this train has already got enough switching to do, so this car is just through freight.
Someone else noticed the consist only had 1 box car but there were 3 industries to switch, should there be 3 box cars? Because we are trying to keep trains short, but still have enought switching to make them interesting, I have made ever attempt to make it logical. E.g. set out a box car of electronics, pick up an empty, set out empty pick up a load of flour, set out the load of flour, and pick up an empty. As you can see the box car you started with is not the one you end with, nor does it have the same contents. That the easy one, flat cars and gondola have visable loads, which might not be consistent with what the train order says, e.g. crates verses containers.
Another example of through traffic are the piggyback cars. The 2 piggyback ramps are on east bound trailing switches, and we only switch trailing switches, so, after a piggyback leaves Wellington, it is switched at Springbank and or Lincoln and ends up in Elsewhere. But it needs to get back to Wellington, so it is not switched on the west bound train, on the other side of this train order.

Larry and I relamped the layout, you can see clearly now!  What a difference.
Rob tested out some new ore cars, he found he could easily pull them up to Ortona with his 2-6-0.
Some more rolling stock was added to our collection.
Glen continued adding scenery. 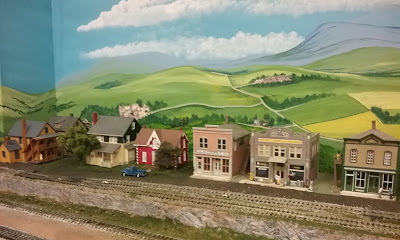 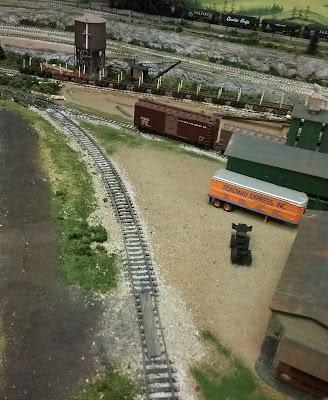 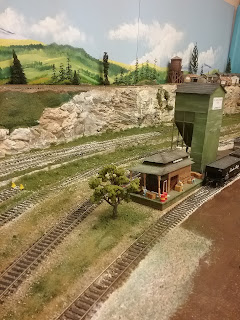 Happy New Year, a year we will be enjoying our new layout arrangement. Looking ahead there is still some scenery to finish up, there is a couple of train routes to finalize. We will also look at updating the industry turnouts in Wellington. We will also start some new procedures to help keep things moving correctly.
A revolving dispatcher, who makes sure trains are taken from alternate yards, and verifies consists of departing and arriving trains, will be tried out.
Two man crews, to help limit the number of trains running and switching errors.
Verifying consists when leaving each town.
Only 1 train in a town at a time.
Verifying rolling stock locations at all industries, Some time during each session. Maybe as the first trains move around the layout.
Updating all signage. This would include larger industry signs, and route diagrams, as needed.
Maybe making a few hard to reach turnouts remote controlled.
Posted by Larry at 7:09 AM No comments:

Glen continued adding scenery to the branchline areas, including a fence around City Services. Rob adjusted the sawmill siding and I lifted the the low spot in the curve into the tunnel, on the branchline. As Glen continued with the scenery, I painted a section of the branchline track a brown colour, then added yellow grass along the ballast and outlined that with a green grass. This should be enough to visually separate the branchline from the mainline, check it out on Tuesday.
Rob and I then verified all the starting positions on all the sidings. What we found was refers where box cars should be and vice versa, a stock car at Union  Ice, and either to many or to few cars at a siding. Granted construction also adds to the confusion. I  do think this highlights the need to start the new year off with 2 man crews. At the end of all the sorting we had to take apart 2 trains to have enough cars for the sidings and branchline trains. We could use a couple of box cars, gondolas, and flat cars.
Rob also suggested that we have a couple of shorter trains for the smaller engines to run. There is 2 or 3 yard tracks open right now to stage shorter trains, and a couple of longer trains can be changed also. If there is a desire to run a longer, say 10 car train, it could be made up just to move between the 3 yards, without switching.