The tedious job of joining feeders to the bus wire, is ongoing. They have been added down to the gap at the Cement plant, and the North yard in Wellington is done. Almost of all the track from Longworth to Admiral has been glued down, the screws will be removed on Friday. The ore train staging track has been added, but the Springbank interchange track needs to be extended a foot or two, so some adjustments to this staging track are required. The ramp up to the gravel dock received the first coat of gravel. 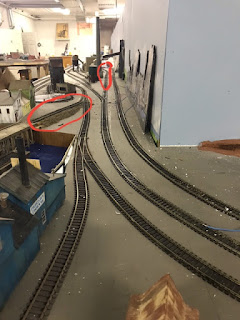 After cutting down the big stone wall, it was installed along the view block by Oxford Sand and Gravel. The tedious job of joining feeders to the bus wire, is ongoing. All the bus wire holders have been installed and the lift out has been wired and contacts installed. 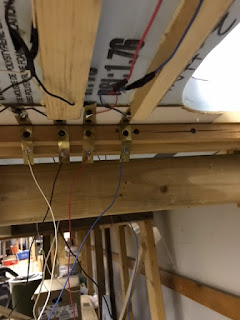 More hills are in or started, around Sunset, and plaster cloth has been applied in Lincoln. 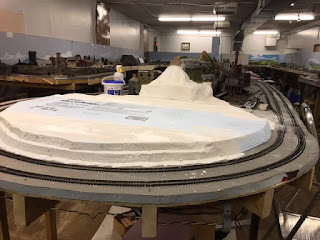 More than 100 pieces of rolling stock have been listed on a spreadsheet. If anyone is bringing in rolling stock please notify Larry B. So I can add them, or they will not have a car car made for them. Looks like we are low in black coal hoppers, covered hoppers and tank cars. We only have 1 piggyback. We have lots of flat cars, gondola, refers, and I think box cars. I have about 30 more pieces of rolling stock to list, right now. With the realization that we have lots of ore cars, and the knowledge that some operators like just running a train, it has been suggested we add a siding behind the cement plant to store the ore train.
Posted by Larry at 8:52 AM No comments: 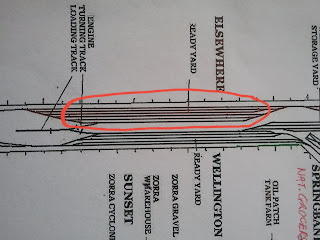 Looking at the TH&B Oliver Interchange, located behind Admiral. The arriving rolling stock will be swapped with those on the interchange track. The Car Cards will also be swapped. The new rolling stock and Car Cards, will be taken to Wellington and put either in the storage yard, if empty, or put on the intranset holding track, if it is to be delivered to an industry. There may also be a time when cars are to be put on the CP Springbank transfer track. Cards will be placed into the appropriate card boxes, corresponding to where each car was placed. Both of the transfer tracks will have train length, limit markers, which will correspond to the length of the corresponding interchange track. 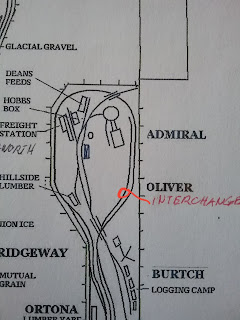 The CP Springbank interchange works the same as above, but has 2 tracks so the arriving train can be put on one siding and the other train picked up. 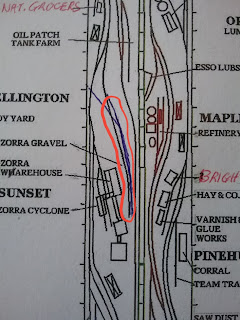 The operating system procedure will be presented in sections because of blog restrictions.


First up, Train Orders.
I am thinking that having a pocket on the back side of freight train orders, to hold car cards might be a good idea. What do you think?

The old, but updated Train Orders for unit trains will still be used. These will include, the logging train, coal drag, oil train, interchange trains, and passenger trains. In with these Order cards, will be Train Orders for freight trains in both directions, probably 2 of each. There would also be a Train Order for a branchline freight, This would make for up to 11 trains, which is more than we would want running at once. Train Orders will be picked in order and once completed, returned to the back of the Train Order box. The only exception is when someone breaking down a train sees that a car they placed on one of the transfer tracks exceeds the train, length limit, they will move the corresponding Train Order to the front of the Train Order box. If we apply the 2 to a crew rule, this would lower the trains running to 5. The fact that the freight trains need to be made up and broken down should also slow down the number of trains running. Special exceptions will be made to accommodate individual requirements or preference.

I will use this short post to include some extra information, most of which was discussed at the meeting. All industries will have a hook or box for Car Cards. All storage yard tracks, interchange tracks, transfer tracks and intranset tracks will have Car Card boxes. Yard and industry sidings will all be illustrated and labelled, on the facia. A track diagram of the next town in either direction, will be located on the top of the backdrop, and colour coded for each direction.
Posted by Larry at 4:16 PM No comments:

Treasures report was accepted. Dues will remain the same. The group did very well selling some of the club's inventory at the last show.

Alternative work times was another topic. With available keys, anyone may come in at any time and in fact several members are doing just that, for various reasons, like, if your working on the electronics there can't be people working on the track at the same time.

The N gauge layout will be placed over the old stove, until the stove is removed. Still waiting on the fair board for that. This extra module is not a priority at this time, nor is the DC layout, but these provide other work opportunities for more people.

In short, options for our operating system were laid out. This system was developed after discussion and analysis of ours and other systems short falls. Samples of a new card system were looked at, discussed and accepted as developed. This Card system will include designated holding tracks in Elsewhere, 2 interchanges, all of our old unit train, Train Orders, and Card Cards for each piece of rolling stock. These will identify the rolling stock and it's forwarding information. There is also a self correcting component which requires that at each industry where an operator drops rolling stock they pick up any rolling stock and car cards at that industry. The last fail safe is, if there is any confusion about what to do with misplaced  cars or cards,  return them to the storage yard, the error will eventually correct itself. More detailed information will be in future posts, handouts and discussions.

Paint booth options were talked about. The area by the unused water heater was deemed good area as there is a vent hole there.

Wiring progress. All the mainline from Lincoln to Admiral is up and running. More bus wires will be run, so that the area from Lincoln to Dover can be worked on, feeders are already done. The electronics for this area will be installed soon. It was decided to use a reversing module to control the power to the turning track.

The bar area will be our rolling stock repair area and the program track will be wired in there. Eventually shelving and part storage areas will be added. There were other ideas for this area, but......😥