At the fairgrounds, next to Club Cartier building, a stone Memorial Cairn was erected by the Royal Canadian Legion, Branch #55 of Woodstock, on August 13, 1995, the plaque reads: 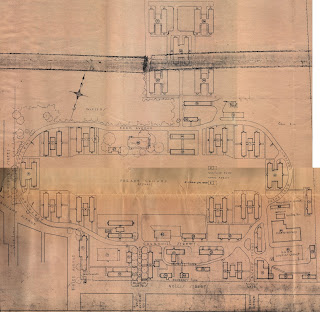 DEDICATED TO THE MEN AND WOMEN WHO WERE PART OF NO.11 MILITIA TRAINING CENTRE, S11 ADVANCED DRIVING AND MAINTENANCE SCHOOL, SITUATED HERE ON THE SITE OF THE WOODSTOCK FAIRGROUNDS 1940-1946.
Map from the Woodstock Museum collection, is at the right.

" The Woodstock Fairgrounds played a very necessary role during the war effort of 1939-45. On August 8th, 1940, the Department of National Defence of Ottawa, decided to use the 15-to-20 acre site of the fairgrounds as the No.11 Militia Training Centre. Mr. Vance of James A. Vance Construction Ltd., of Woodstock, was chosen to supervise the construction of 30 buildings to house and accommodate 1,000 trainees and staff; which had to be completed on a very tight timetable A few of the buildings are still in use today: one is the renovated Club Cartier at the west end next to( Fidler Ave. and )Rathbourne Ave."
Quoted from the Woodstock newsgroup by Paul Roberts.
Picture of vehicles is also from this article. 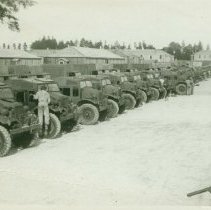 For more information also see the collection section of the Woodstock Museum.
Adam Pollard
Collection/Exhibit Coordinator
Posted by Larry at 12:57 PM No comments:

Moving In to Our New Location 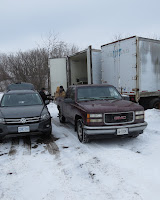 On Feb 16, Oxford County moved from Lockdown to Red Tier which means we have a bit more flexibility to move around the community as long as we respect the pandemic protocols. So on Thursday, Feb.18 at 2 pm, several masked club members descended on our trailer storage unit and loaded up Cliff's truck and a number of member vehicles and began shuttle rums to our new club layout location in the Cartier Building at the Fairgrounds. 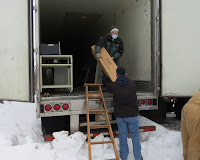 We were somewhat selective in our unloading process so that we are bringing the things we need to start building the layout such as lumber saved from our last layout to build the frame-work base for the new layout, plywood to sit on the framework. Of course, a lot of smaller boxes were also transported because they fit best in member SUV's and vans. 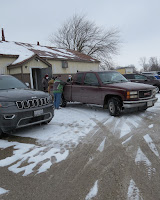 Here we see the stuff loaded at the trailer being unloaded at the Cartier Building, a former WW2 army barracks with a little known history in Woodstock that may appear in future blogs. The Slots next door were helpful in permitting us to drive over the curb into their staff parking lot, bypassing the gate at the normal entrance. This meant we didn't have to carry our stuff from outside the parking lot. 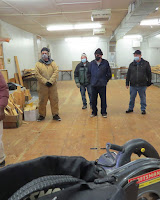 Here are happy, masked "truckers" socially distanced in our new location, a clear span area as large or larger than our former location and on the ground floor shared with no one. We had a second shuttle run on Feb.19 with a third planned on Feb.26. We will soon be all moved in ready to get building when things open up, hopefully sooner rather than later.

We now have a lease, insurance, and keys, now we are waiting for a change in the lock down. It looks like next Tuesday there will be an announcement.

Plans for our new layout have been on our Facebook group page, The Woodstock model railroad club and Glen recently sent four out via email, for our members comments.

Moving forward, I guess there is some clean up, repair, and painting to be done. Then we need to move all our stuff out of the trailer.

Next we need to design and build the benchwork. The overall space of about 23 x 57 feet, a little narrower and a little longer but, it should give us a little more room than we had before. There is also a lounge/work area of about 13 x 13 feet.

Hope we get back soon!

Rising From The Ashes to a New Beginning 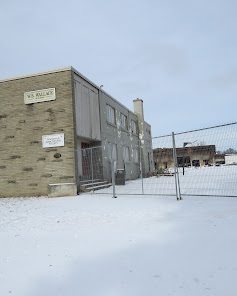 The last post left the reader with a sad tale of a layout vision planned for the second story of the building in the foreground only to see our hopes dashed by the fire that destroyed the barn right behind it. The heat damage and cost to fix up meant that this building has to be demolished as well. The remains of two barns behind this building have now been cleaned up.Instead of moving what we salvaged from our Devonshire layout to this building, we needed a new plan. So what to do?? 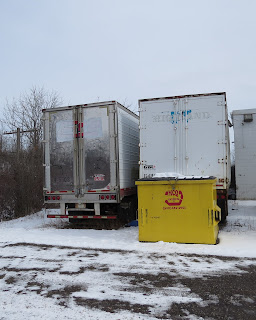 With our layout now deconstructed into boxes of things we could save, lumber from walls and layout structure plus a lot of scenery garbage to get rid of, the push was on to find another location, hopefully on a ground floor and at an affordable cost. Alas, the fall weeks went by with no viable options so our chief came to the rescue with a place to store our stuff before the winter cold and snow arrived. He prevailed on a friend to loan us a 53' trailer that was no longer roadworthy but weathertight and lockable. With pandemic protocals adhered to, we transported our goods to this location where they are as I write this. Several members' basements are storing fragile items such as structures, products that could freeze, electronics, etc. And the push continued to find another location. A Facebook page was set up to keep members informed about possible layout designs if and when a place was found. 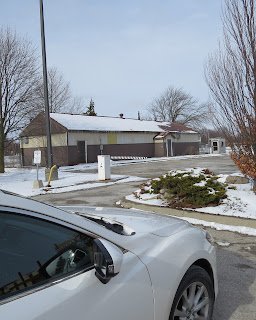 As time unfolded, it became evident that another fairgrounds building might hold promise as a new location for our layout. We were able to have a tour and while it needed heat and water, the clear span interior offered great layout design possibilities. Negotiations were entered into and a deal struck. The furnace from the Wallace building was moved over and hooked up and the water also hooked up now that the building is heated. We are tenants as of Febuary 1 with key in hand. With everything in pandemic lockdown, we can't move in until things open up but we can seriously plan what is going where for both building and layout. Stay tuned as we start a new chapter in the Woodstock Model Railroad Club.

Posted by Glen McDonald at 10:09 PM No comments: