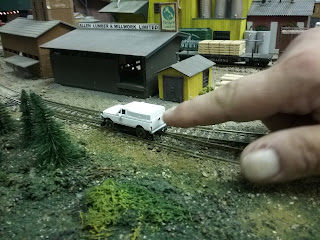 Another job for next week 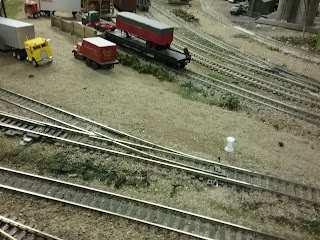 This turnout needs an over center spring. 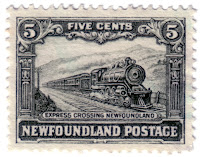 Since one of our esteemed members recently visited "the Rock" and sent back a picture and note that he had found the "missing Newfy Bullet", it seemed appropriate to bring all our members up to date on this Canadian railroad legend. Started in the 1800's using 3' 6" narrow gauge trackage
by private operators, the line ran from St.John's in the east over central highlands to the ferry terminal at Port Aux Basques in the southwest corner of Newfoundland. The passenger train, called the Overland Limited, was
operated by Newfoundland Railway from 1898 to 1949 when the island be- came our 10th province and Canadian National Railways took over. The stamp was issued in 1928 and shows the Overland Limited before it was renamed the Caribou in 1950 by CNR. The nickname, Newfie Bullet, was coined because of the 23 hours that it took the Caribou to traverse the route each way if circumstances were normal. Weather and maintenance problems could quickly increase the time. The Trans Canada Highway opened across the island in 1965, allowing cars to make the trip from the ferry to St.John's in under 12 hours. This competition started to seal the fate of the Bullet since it took a day and a night to make the same trip. By 1967, CN started a bus service that made the trip in 15 hours. However, many fought against the demise of the Bullet  by 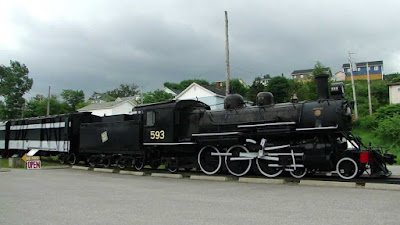 claiming the buses would not be able to
handle the rough Newfie winters. A train
derailment that winter with passengers transferred to buses in turn derailed their argument somewhat. Still the Bullet con-tinued to run because of CN concerns that buses would not be able to handle the rapidly increasing summer tourist numbers by 1969. However, additional buses allowed CN to stop running the Bullet in July, 1969. Freight service con-
tinued across Newfoundland until the complete abandonment of the unique narrow gauge system in the fall of 1988. CN bus service was sold to private operators in March, 1996.


Posted by Glen McDonald at 3:03 PM No comments:

Projects  ALL HANDS ON DECK!

Start Elsewhere rework. We could have 2 crews work on this. 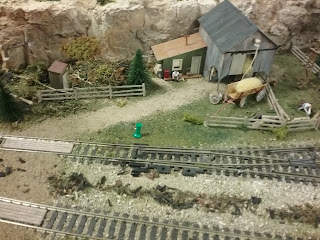 This turnout needs an over center spring 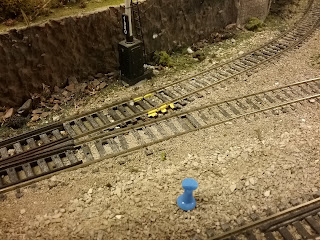 This gap has moved and needs to be fixed. This would involve putting in solid rail joiners at this spot and gaping the track further to the right at a straight section.  New feeders will be needed. 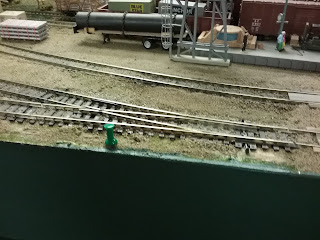 This turnout has no feeders. It's the 1 that goes to the turntable in Lincoln.
We may find more jobs to do, please bring operating problems to my attention.
Posted by Larry at 8:20 AM No comments:

Maligned switches turnout not to be the problem. (love this pun) 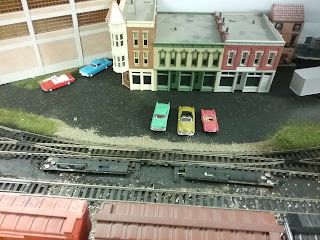 Joseph was having trouble with his engine stalling on both of these turnouts. So we took his 6 axle diesel off and put my 4 axle diesel on the track. It ran through them just fine, must be the 6 axle diesel causing a short, Right?  Bring in Jim  to investigate the problem. The 6 axle diesel was set on the track and as Jim watched, it ran through with no stalling (who says there are no railroad gremlins). Well maybe with the cut of rolling stock attached, the drag might effect it, Sure!  OK it Stalled!  Our group does not like metal wheels, especially when mounted on metal trucks (we are working to remove all the metal trucks and wheels, if you have any spares bring them in.). As it happens the cut of rolling stock had 3 combinations of these. All 3 were removed and the smaller train rolled right through. Adding them back in to the consist 1 at a time isolated a gondola with metal wheels and trucks. As Jim rolled it through the turnouts, it shorted out the system, in fact you could see sparks flying (that's why I call him Sparky) Further investigation also showed the wheels had too small of a diameter causing the bottom part of the truck frames to periodically touch the rail head, into the repair shop it goes. I wounder how many times this car has caused shorting problems that were blamed on turnouts, in the Past?
If we take the time to investigate problems like this maybe we can chase the gremlins away.
Posted by Larry at 7:51 AM No comments:

Crews looked forward to  enjoying operating on a light night, but look what happened.

Meeting night at the Huff and Puff

With a good attendance we got down to business. The comming closure of Just Train Crazy was discussed, they have everything at 20% off, so I've been told.
Next it was decided that we will try having meeting and work nights only when needed. Anyone can call a meeting.
The first Tuesday in September will be a work night. We should all work together to identify areas that need attention. These may include finishing up the new program track that Joseph has been working on. Then the old program track can be removed. Dead track areas need to be investigated and repaired, the extension of the tank cars track in Springbank needs to be ballasted, we should discuss the viability of moving the turnout to the mine sidings back to make these sidings longer. We should check the mainline for "teeter totter" track with a level (this would identify high spots that cause uncoupling) and level the grade in these areas.
The Elsewhere project will be scheduled sometime this fall. There may be a way of doing it in stages. When the program track is removed, maybe we can rework the first switching throat that would lengthen that end of the yard. Then we could cut in the turnouts in the middle of the yard, which would finish the bottom yard, and then add the tail end (escape) turnouts for the upper yard. Or we could shut down Elsewhere and do all the changes at once.
I forgot to mention the "dot" system for identifying problem rolling stock. This involves using stick on dots, of different colours, to indicate how many times a car has been repaired. We could each colour for a certain problem or use different colours until late we get to red, the next time it has a problem that car would be removed.
After the meeting some did some operating while others continued the lounge conversations.
Posted by Larry at 7:50 AM No comments: