The branch line car ferry was test fit. We put down a smooth floor for the ferry stand to roll across from Miller to the dock at Northdale.  The log pond got another coat of Pledge with Future.  Road lines were painted at Valleyview.  Some between the tracks ballasting is also on going. One section, Elsewhere, was giving us trouble, we thought, it now seems that one of the boosters is the problem.  Other than the tunnel area near Lincoln and sections of the branch, we are moving into the detailing stage.  As this progresses, the railroad will come alive. I wonder how many times new ideas will surface.  As an example, I had no idea that Valleyview would look like it does, Bill has done a nice job on this town.

Some of use met on Sunday and relamped the train room. A couple of wall supports were no longer needed so we removed them. We also rerouted some overhead wiring.  Although only we will ever know, what a change for the better.  On Tuesday night, the members all commented on how nice it was to have enough light to work in.  A new road was cut in to the Warwick Station and scenic details were added at various locations around the layout.  The new tunnel and hill got a plaster job.  Three engines had trial runs and bugs in the Digitrax system were worked on.

Jim did this kit by Blair Line justice. It's a model of a "juke" joint that might be found off the beaten path, it even has an outhouse. Offering food, drink, dancing or "recreational" gambling, in the back room. It fits right in on the dirt, power plant road. The power workers probably have their meetings there! 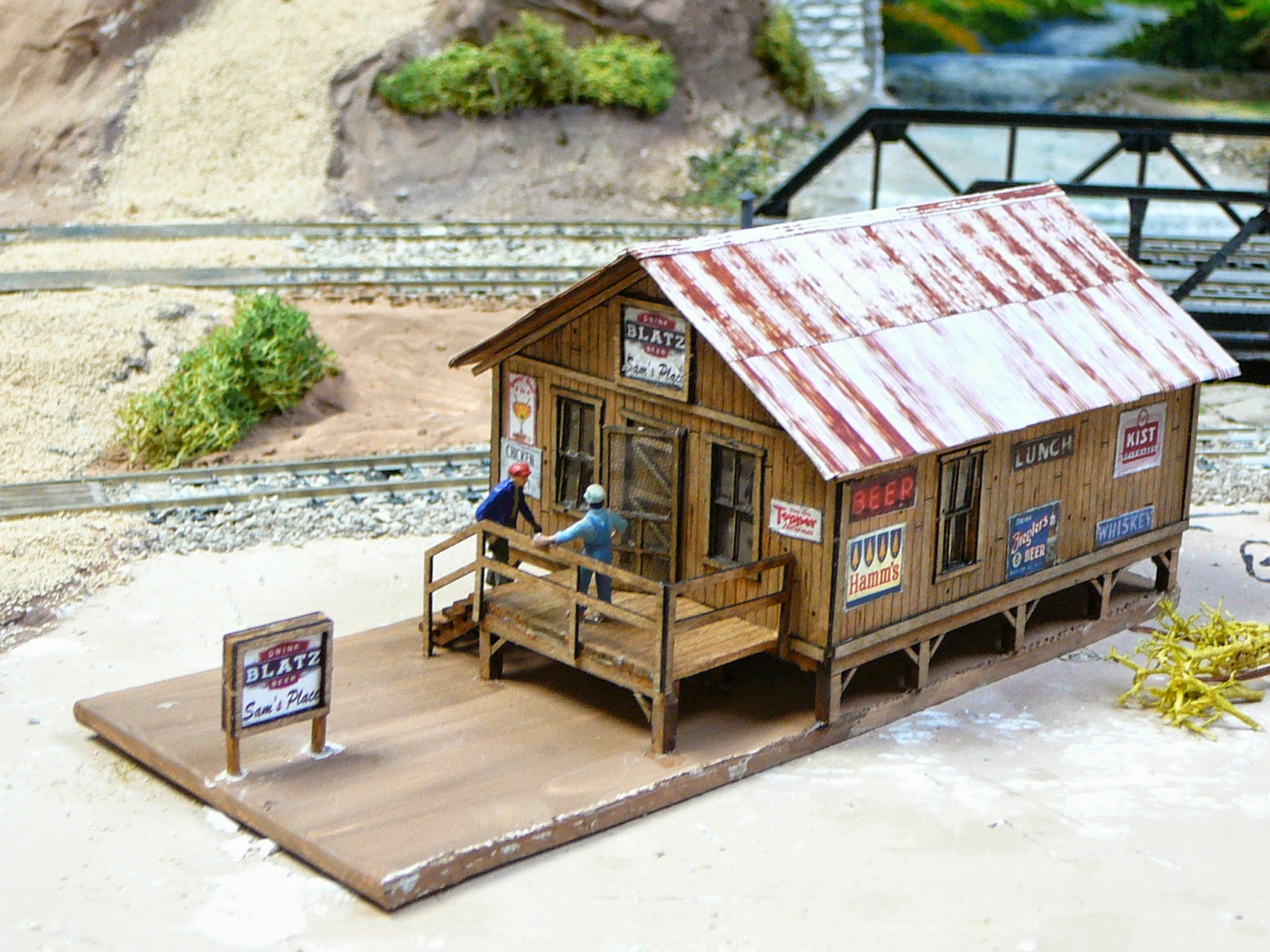 For an area that I had never envisioned as little more than a curve of track with a little scenery, it has taken on a life of its own. First a farm was added and then Jim brings in a collection of buildings for the area. Try as I might, he wouldn't let me give them a good home on my Grants Pass Western, hmm.  Haley's Grain Store by Blair Line, and Macon's General Store and Quality Woodworking, both  laser-cut wood kits by Walthers were added to the end of the Power Plant Road. Jim did an awesome job on these kits. As this area develops into a small town, I wonder if we can connect it to the station at Warwick, let's see, a hilly road and an old Bailey bridge across the McDonald River, would look great. 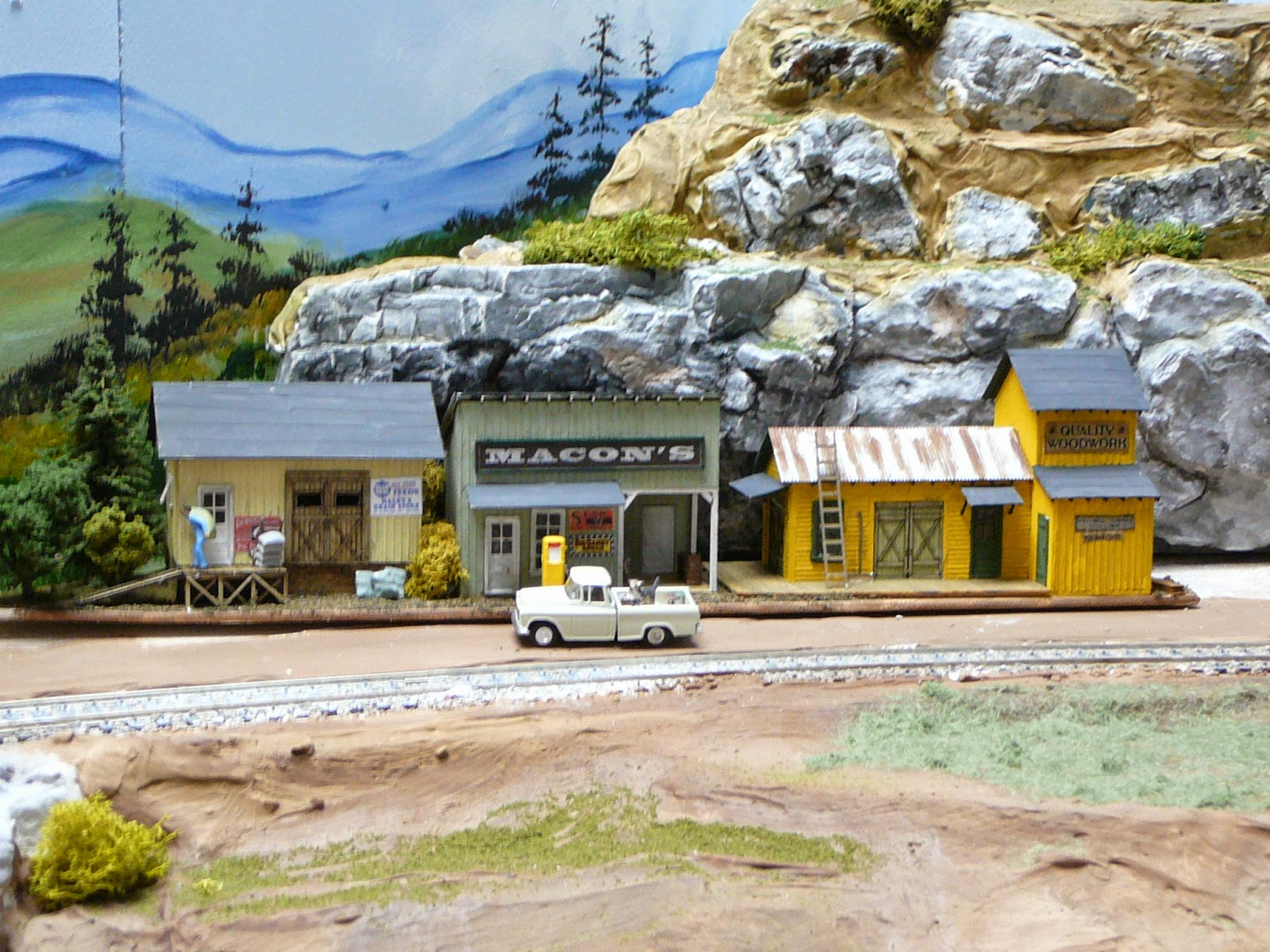 After Glen levelled the area for the station, a road and a couple of barns with a tree, we're painted on the backdrop.  The station was put in place and more scenery was added.  Well the tree and the road look nice, but the barns are hidden by the station, oh well.

Tuesday Night at the Huff and Puff

The night started out with a screeching noise, and upon some investigation, a baby racoon was found and relocated to a tree outside.  All the blocks on the main line were tested and found free of shorts. To do this one block at a time was added to the system. When it was found to be short free, we shorted it out to verify that it shut off and that the system would reset it. It didn't take long for a couple of engines to get a trial run, with Cliff and Rod cleaning track as they went.  Cattle were added to the stock yard at Hillcrest Packers, in Lincoln, and the park at Valleyview grew grass and a rod iron fence. A log ramp and logs were added to the log pond at Miller and the track on the branch was weathered.

The tunnel near Lincoln was revised and reworked. It was moved so it was on a straight section of track, and an access hole was cut under it for access to any derailed rolling stock, just in case.  The main line at Valleyview was moved over to give more space for a garage scene Bill is working on.  Rock painting and wiring is ongoing. Ralph added scenery at the trestle approaching Pinehurst, on the branch line. Bill also displayed a tree he built by adding more branches to a dried sedum flower, which was then painted and dusted with green foam. Doug was doing road work at Lincoln.

The first unit is the Command Station/booster, the brains of the system.  It is hooked to a 5 amp booster. These two units are powered by their own 5 amp power supply.  The two boosters, each supply 5 amps of power to a separate Quad Power Manger. Each Quad Power Manager has 4 separate power outputs, giving us 8 separate blocks. If someone shorts out one block the other seven blocks are not affected. The first Quad Power Manager powers block 1 and 2 which are the return loops and they are equipped with Autoreverse units.  It also supplies power to 2 more blocks.  The other booster powers the other 4 blocks. We did have 9 blocks, so we combined the 2 branch line blocks into one, as there will be less power required there. Three smaller power packs, power the two Quad Power Managers and the Radio Transmitter/receiver/Infra-red receiver unit.  Note, the radio transmitter/receiver has a three hundred foot range, so it was just located near the Command Station. There are 13 phone jacks around the layout, which are daisy chained with 6 wire flat phone cable, to each other, the Transmitter/receiver, the boosters,  and the Command Station. We put in that many phone jacks in case someone wants to use a simplex throttle instead of a duplex one, there will be lots of plug in points. Note, radio waves from a simplex throttle will not be received by the Command Station so it would have to be tethered at all times.  In addition to this there is a separate programme track, which is double gapped from the layout, that plugs into the front of the Command Station so it is isolated from the layout. Engines can be programmed and then pushed across the two feet of non-powered track onto the main line. The infra-red part of the system  will not be used as it needs line of sight to work, which would require several receivers around the layout. Yep,  DCC wiring is simple.