Look what I found in Virginia 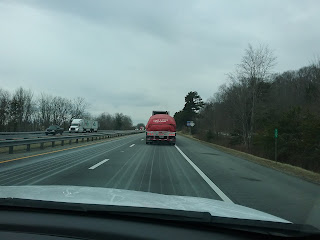 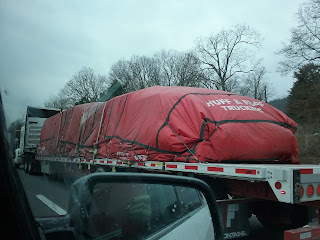 Is Our Layout a Happy Place??

I read an article recently that said each of us more than ever needs a "happy place" where we can retreat at times from the trials, turmoils and pressures of today's society. It needs to be a place where we can do the things we like without being unduly bothered by having to conform to what others think we should be doing and when we should be doing it.
For some, it may be listening to music or reading a book that they enjoy. It may be going out for coffee with a friend or going for a drive to enjoy nature on less travelled roads. It needs to have a purpose but no pressing deadlines or other pressures; something each of us can do alone or with others.
I think our layout qualifies as a "happy place" for me. I thoroughly enjoyed the construction phase over three and a half years where we could do things together as a club but also contribute by building things at home for the layout. I have never been part of a group before that has worked together as cooperatively and as well in sharing skills, ideas and assistance as you folk. Now that construction has morphed into operations, it has provided the opportunity to work collaboratively with each other to move our trains over the layout, especially on Tuesday night sessions. I never see a scowling face at such sessions except when gremlins derail your train at the farthest area from the aisle and such scowls are momentary and not aimed at others. For some, it also provides an opportunity for a time of socialization. For me, the Friday afternoon sessions are the best "happy places" where two or three of us can run trains often with little chat and usually clear track. This is a personal reflection as I realize that not everyone is able to come up on Fridays.
When I had a layout at home, it was a happy place of sorts for me but since we developed our community layout, it has provided greater enjoyment because it offers the    opportunity to enjoy and share running trains with others on a much greater scale [no pun intended] that most would be able to do space and cost-wise with home layouts. 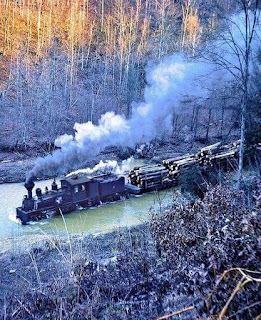 Let's hope this doesn't happen on our logging branch.
Posted by Larry at 8:11 AM No comments:

I knew that heat will expand track, but it is cold out? 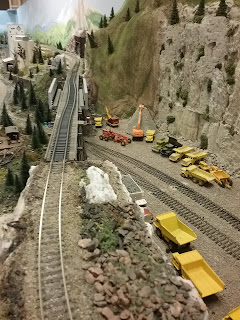 So why is this track bowed out? We will have to gap the track a bit, if it gets any worse. This is not the only spot this occurred, a turnout in Elsewhere was lifted up a half an inch or so?
This did not cause any delays as you could hear trains running and the munching of cookies everywhere, thanks Rick.
Posted by Larry at 9:39 AM No comments:

First meeting of the year.

This is what is great about our group, our business meetings are short. We have 18 members, and our finances are sound. Don also read off a list of upcoming train shows.

Projects
We should replace burnt out fluorescent lights.
We still have a voltage drop in the quad unit that supplies Springbank, Lincoln, Miller and the branch line.

On the lighter side, the first, I think, 44 tonner ran the rails of the Huff and Puff. I think someone was shopping at the Woodstock Train Show. In fact we used it to find out what areas were affected by the voltage drop, which to my surprise was not just Springbank.

As a youngster, I noticed a picture of my Uncle Ben in my Grandparents kitchen. My Dad told me it was his oldest brother Ben, who had past away. Nothing else was said. It was probably not until my teenage years that I found out how he had died. As I recall from our family lore, 18 year old Ben had been asked to show Joseph around the surrounding area to establish a bread route, for a new bakery in Tillsonburg. On the fateful morning of Feb. 6th. Ben told his mother this would be his last day showing Joseph around, she could not have known the irony of that statement.
Ben and Joseph were approaching the M.C.R. crossing on the Coal Road between Otterville and Delhi at about 10:50 am. nobody knows who was driving the vehicle that fateful day. Edwin Long the engineer stated he had blown the whistle at the whistling post a quarter of a mile from the crossing as he guided the huge Hudson locomotive and 9 express cars and coaches, at a speed of over 60 miles an hour, eastbound towards the crossing. He was on the south side of the engine and did not see the vehicle approaching the tracks on this clear and fair day, but then he heard the fireman call "hold her". He immediately applied the brakes into the "heavy service application".  It took 1500 feet to stop the massive train weighing hundreds of tons, but alas they were only 100 feet from the crossing according to fireman Clark Roberts. He was perhaps the only one to see the impact.
He usually kept watch on the left side of the engine, but about a mile before the crossing he had noticed the coal had not been going to the conveyor and had to go back to pull the slide and adjust the steam jets and increase the pressure on the conveyor and elevators to spread the coal on the fire evenly. He had just returned to his seat in time to see the the auto about 25 feet from the tracks. After hollering "hold her" he jumped behind the boiler to protect himself from broken glass and debris, as his window was broken. He said the auto was running about 25 miles an hour and did not slow down.
The impact sent the auto flying 150 feet, coming to rest on the west bound track. Both men were killed instantly from multiple injuries, which were spelled out in all to graphic detail in the newspaper. Why they did not hear the whistle or see the train and why the fireman was called away at such an unfortunate time, always haunted my dad's family, although in those times things such as that were not mentioned often. In another irony that track is long gone. Rest in peace Uncle Ben, March 3, 1912 - February 6, 1931.
Posted by Larry at 8:43 AM No comments: