Finishing up the Cimarron Mountains Now the mid-range hills, valleys and trees are painted in. Using dark green, light green and yellow, the hills and valleys are layered in, light against dark. Yellow will help make groups of trees stand out. 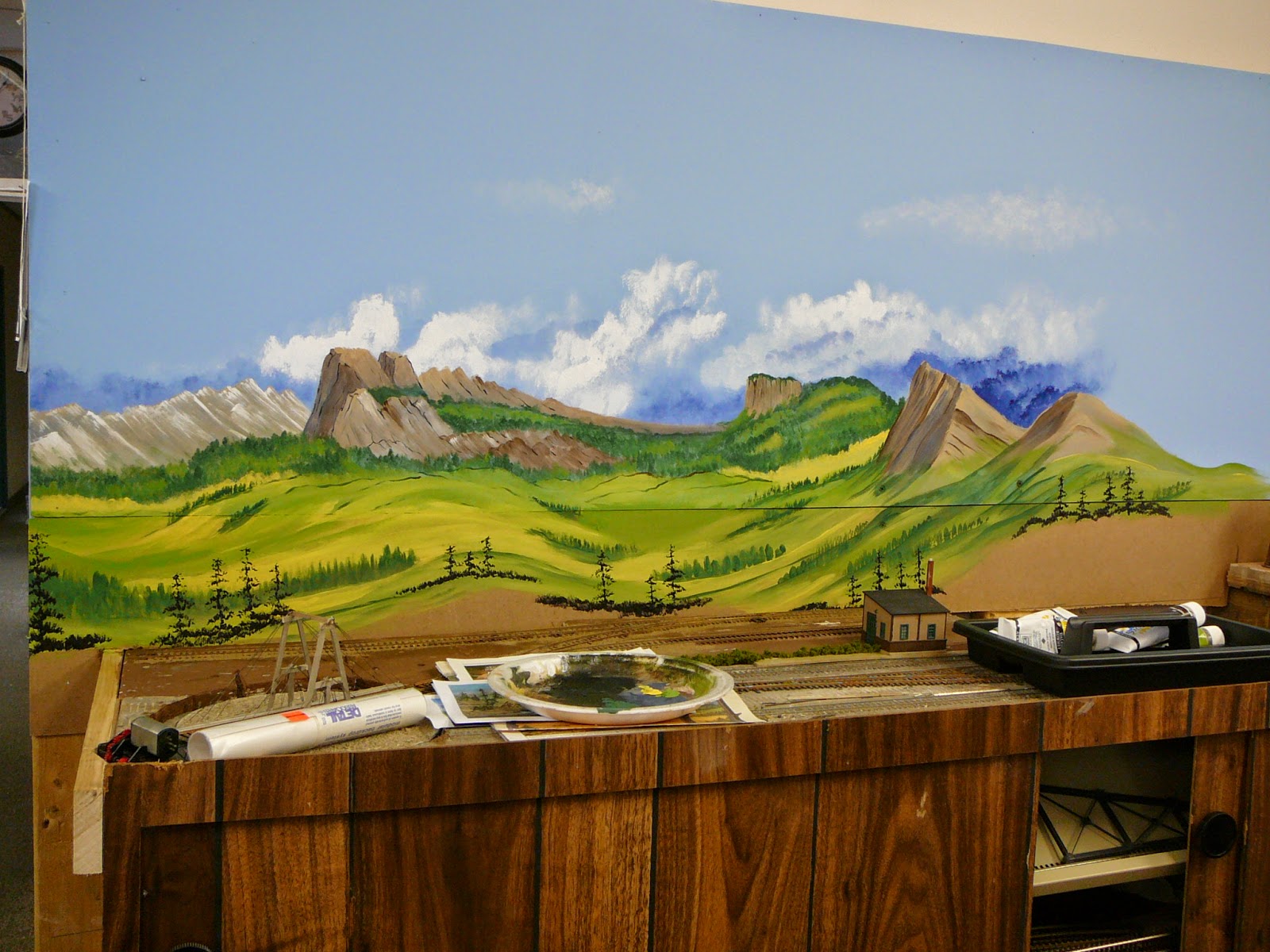 A couple more tan mountains are added along with some fore ground trees and brush. 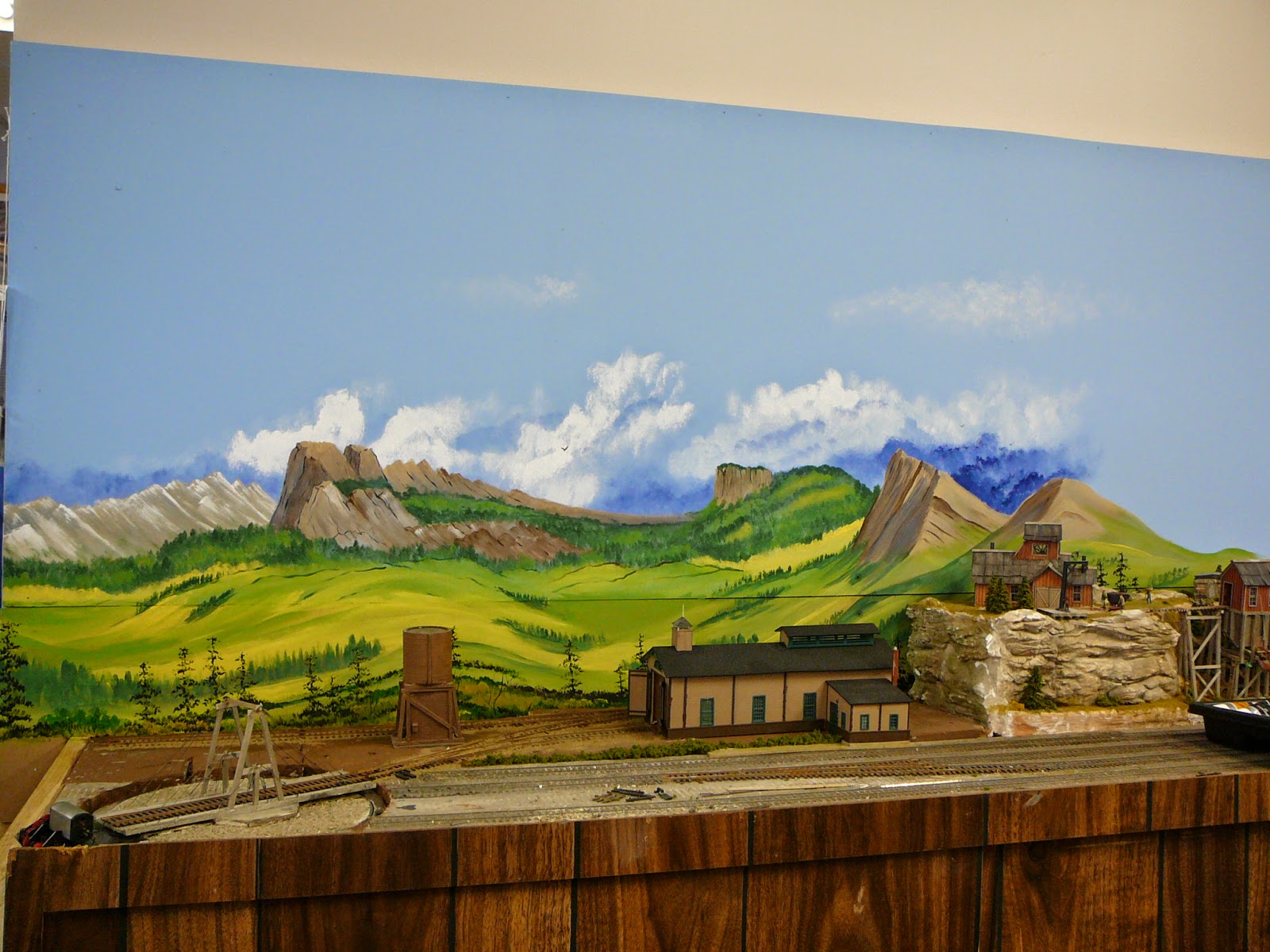 The last of the fore ground trees are added, along with 3 birds, very small. The buildings are put back in place and my part is done.
Posted by Larry at 1:19 PM 1 comment: 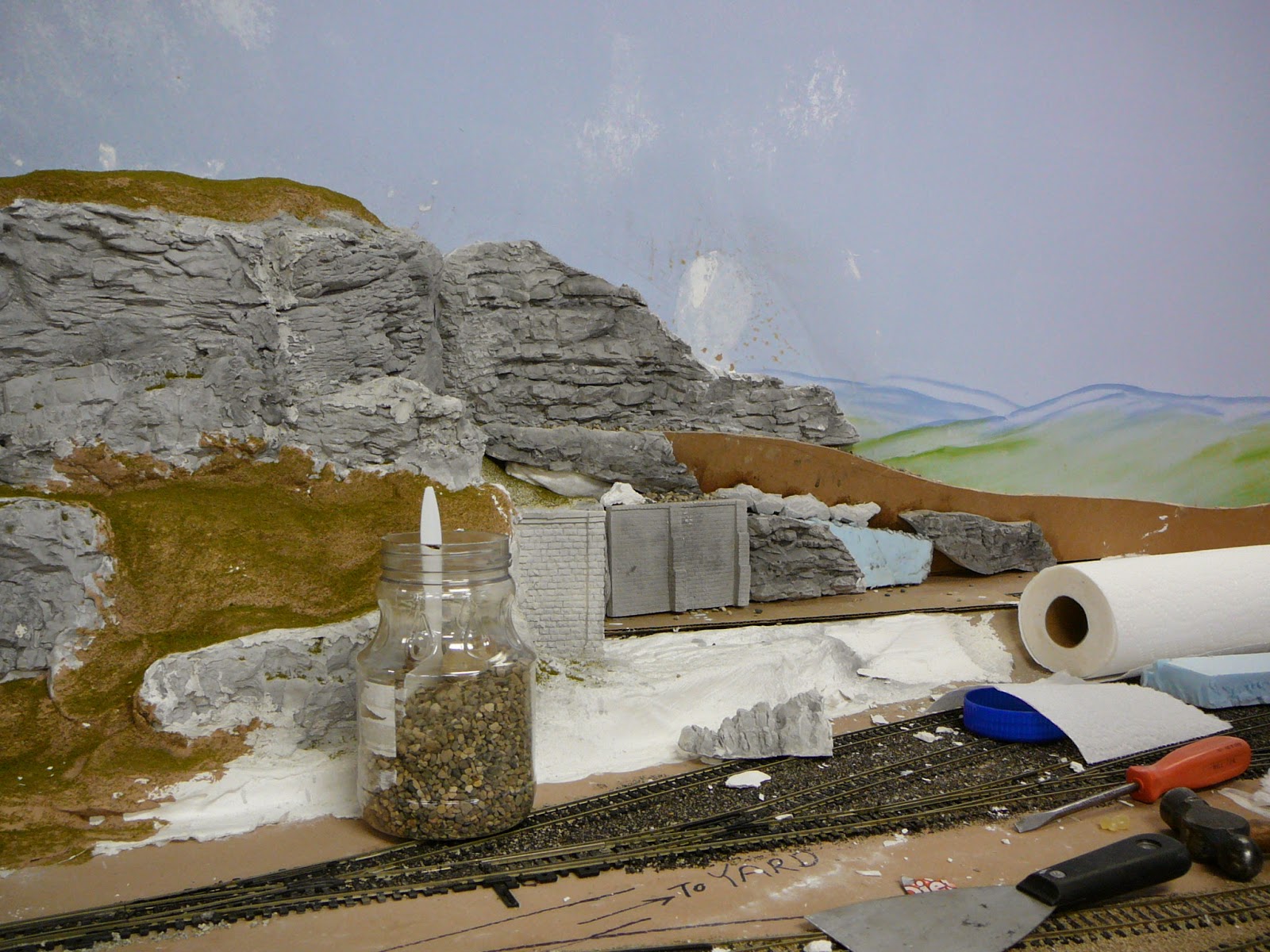 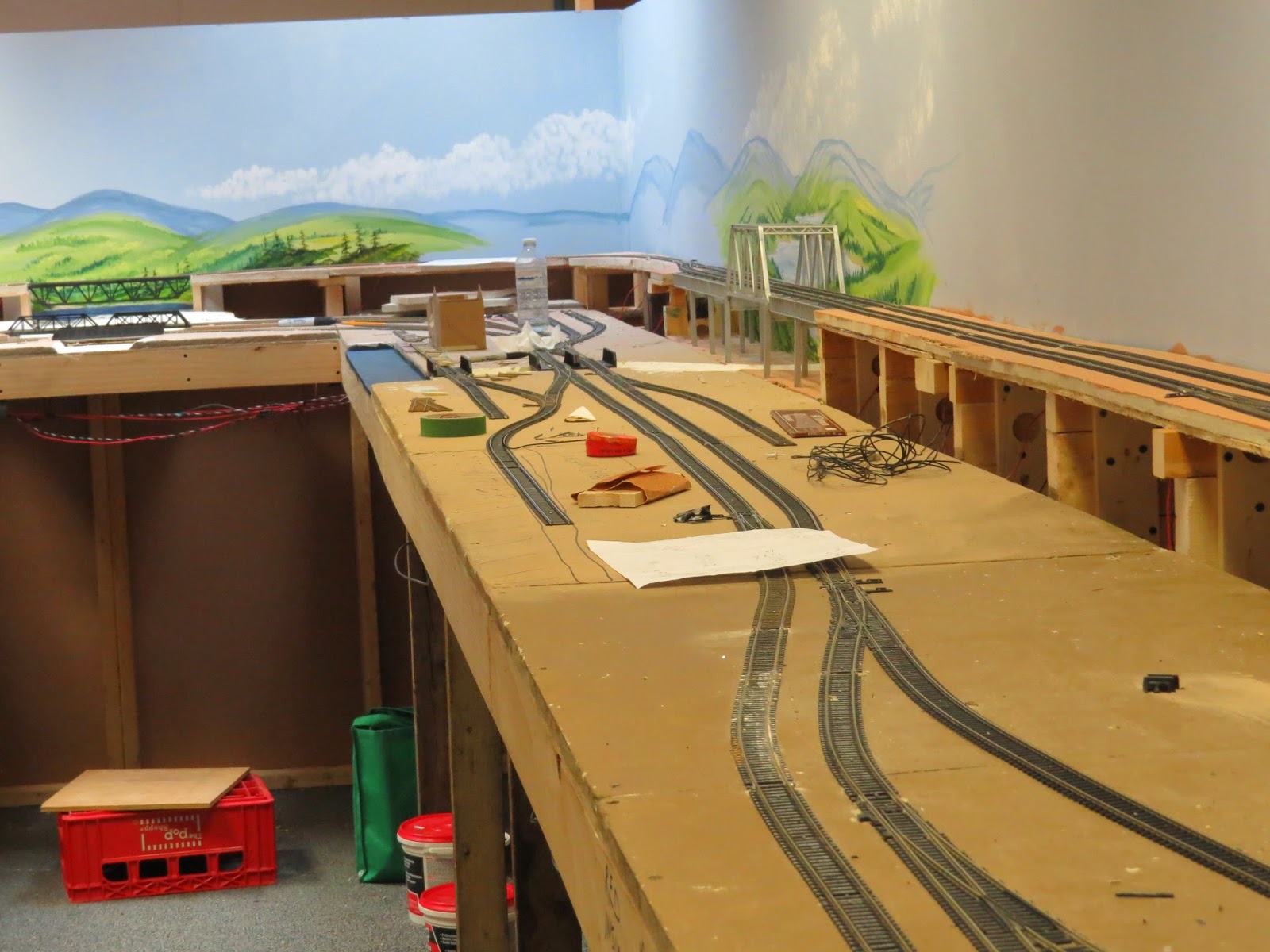 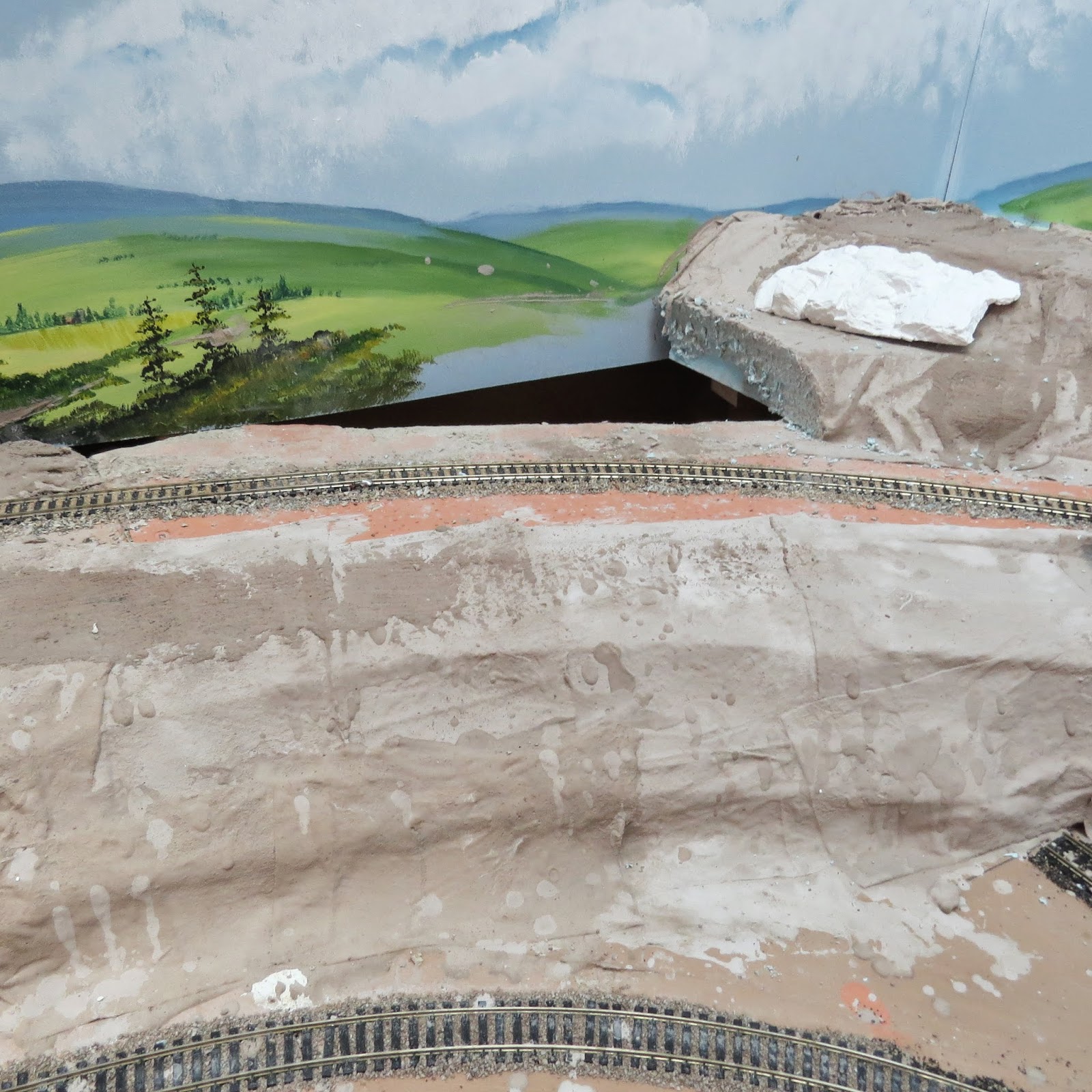 Hmm! It seems hilly terrain has filled in the area between the two levels of track covering up Larry's lake. Glen took on the chore of scenicking this area and, as usual, Larry showed up with the challenge of needing a railway station at this point called Warwick. Glen cut out part of the hilltop as shown in the above photo 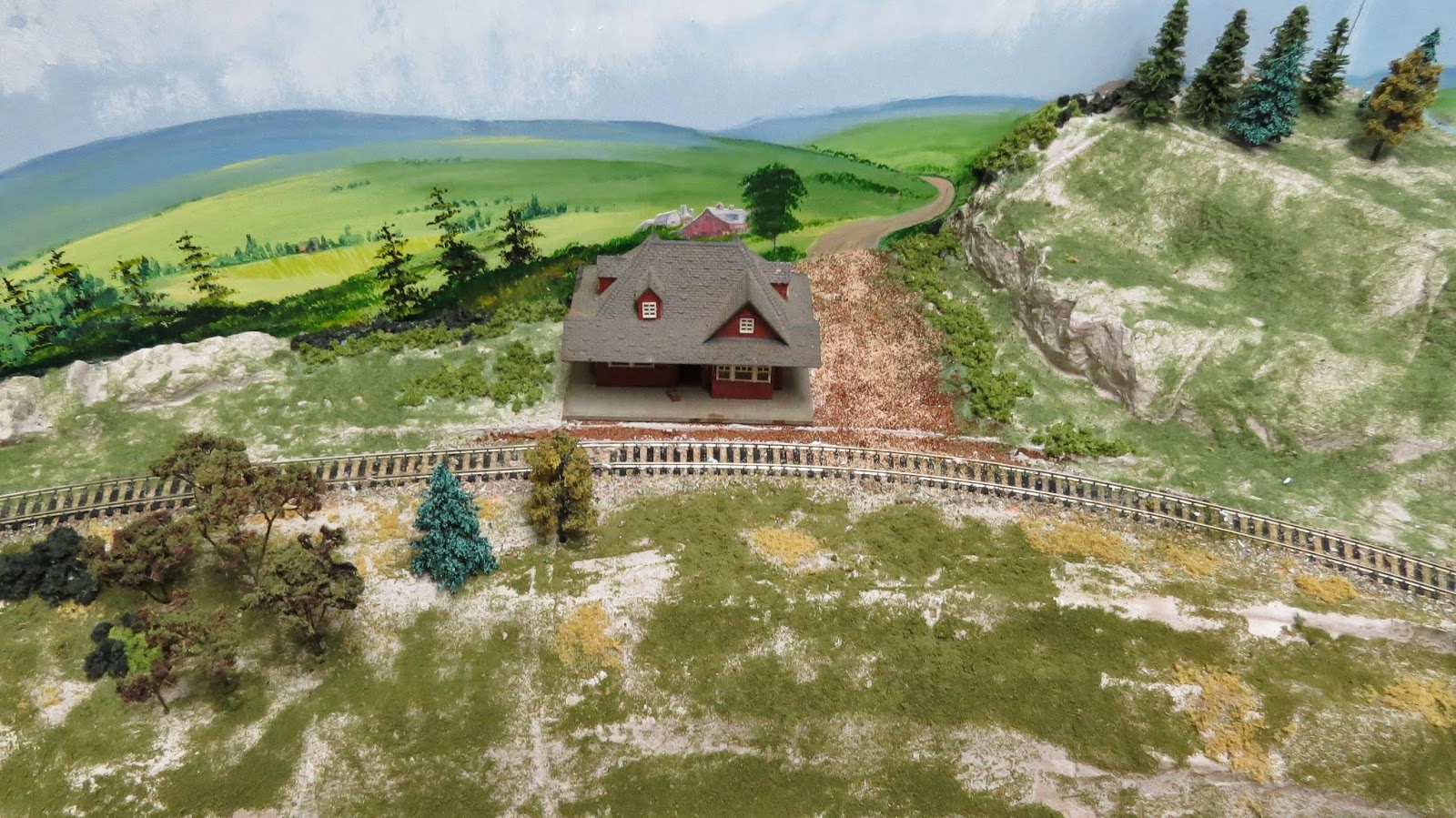 The Warwick station has magically arrived, situated on the level surface that filled in the cut out area shown in the preceding photo. A parking lot was constructed joining up with the road painted on the backdrop. If your eyes allow in this aerial view, you can just see a farm that Larry included in the backdrop that the station covers up in normal viewing. Ah! the poor planning irony of making suggestions too late. 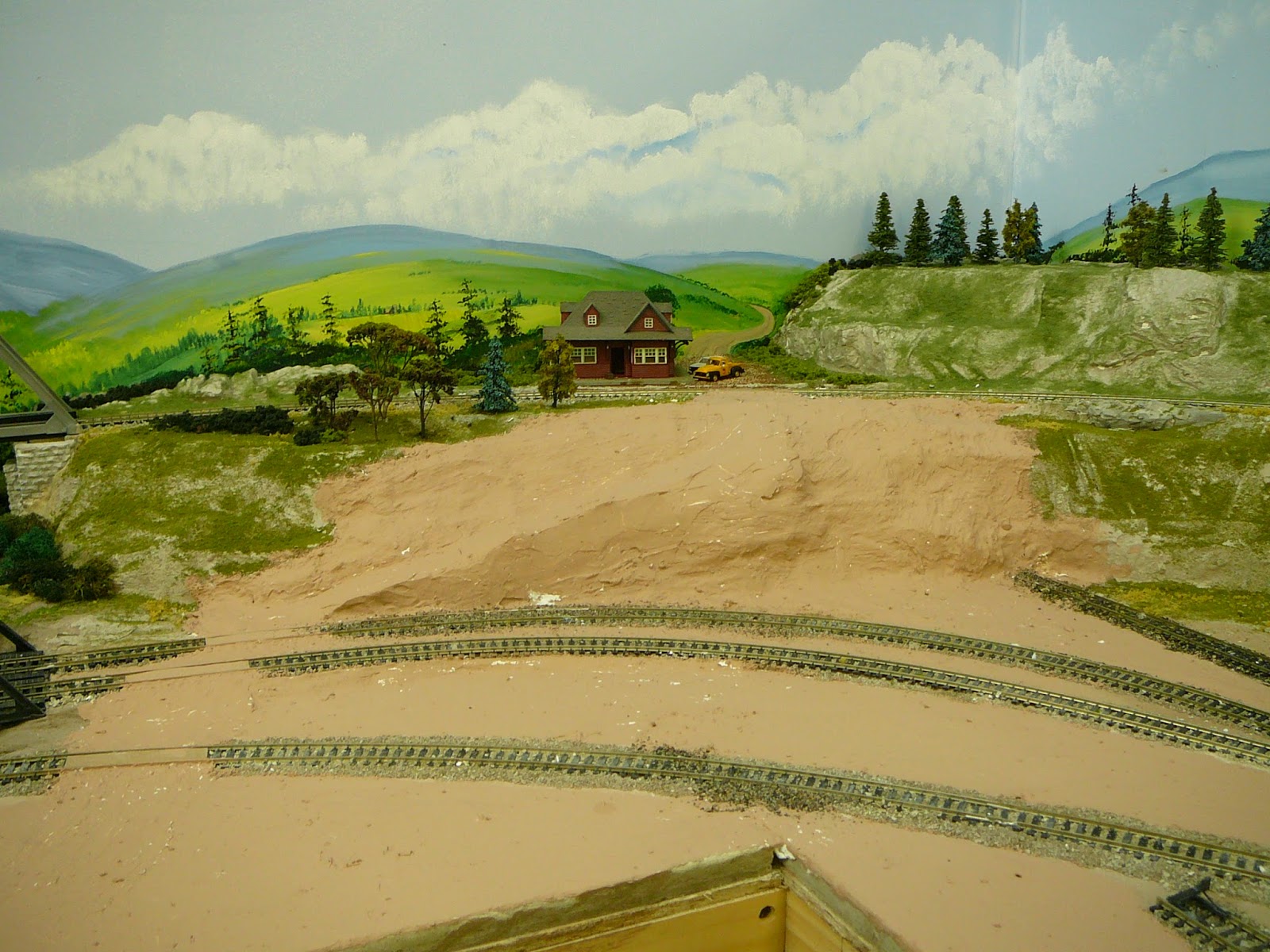 Oh no! Larry sidled up again and said. "We have a road at the lower level that has no outlet. You have a road leading to the Warwick station parking lot at the upper level. Do you follow what I'm thinking??" At this point, Jim Long showed up with his bulldozer trapped on the lower level. So Glen, as an obedient follower, hacked into the newly scenicked hillside and remolded it to show a road under construction. Isn't this just like real life?? 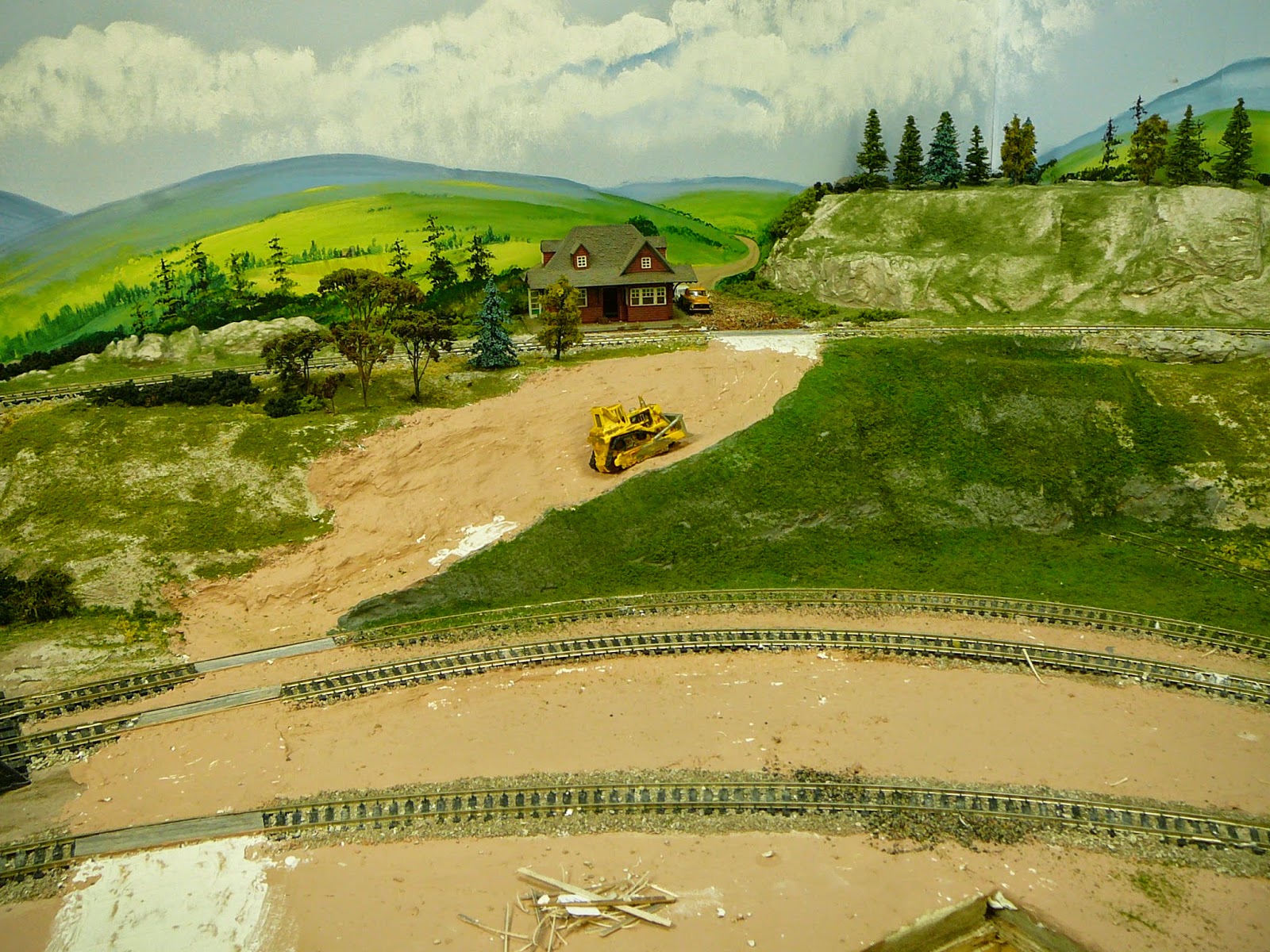 The above picture shows Jim's bulldozer hard at work carving out the road between the upper and lower levels. Wooden railway crossings had to be constructed for 3 tracks at the bottom and 1 track at the top. Since this ground has a lot of clay in it, we're hoping the Tuesday night rains quit until we get the road finished. It is just a simple country road, nor a main route so it won't ever get paved [lucky to even get potholes filled or guardrails installed]. That's life! It is what it is. . . .

Starting with a light blue sky, painted on the backdrop, I started dabbing in white clouds. A half inch round brush, is dabbed into white tole paint, and then dabbed onto the backdrop, outlining the upper edge of the cloud.  Start at the lower edge of the cloud and dab on the paint in a irregular, lumpy cloud outline. Moving up and to the right as you go.  The brush will run out of paint as you go, letting the cloud fade naturally.  Continue with this technique, either where you left off, or a little to the right of the first starting point. In this manner, the cloud layers are built up, going from bright to faint areas.  More clouds can be added, but always build them from left to right. The clouds can be made as large as you want.  Go back over areas that don't look right.  For this scene I then used a navy blue, that had been thinned a little, with water, to darken the area just below the clouds where mountains would be added.  This will make the lighter coloured mountains stand out. With a light tan tole paint loaded on a flat, angled, half inch brush, the tops of a ridge of mountains, was painted over the bottom edge of the navy blue clouds. The brush was pulled down from the top to the right, to define the slope of the mountains. Then, just tapping the brush edge into the white paint, it was lightly touched to the top of the ridge and feathered down and to the right.  This makes the ridge look snow covered.  The brush edge was then tapped into the navy blue, which was feathered onto the bottom of the slopes.  The blue and light colour of this mountain ridge makes it receded into the distance, while the snow reinforces the height of the mountains.  Next a large butte was added using much of the same technique. The left side was darkened with blue and a darker brown colour, to indicate shadows. Thin black lines were added to define ridges and cracks.  This butte was made to slope off to the left where yet another butte was added. Then trees were added along the bottoms of the mountains.  A small flat brush with stiff bristles was loaded with dark green and tapped on using a downward stroke, making a pointed blotch which looks like a distant tree. Tap along to the right until the paint fades and then reload and continue. The lines of trees must be naturally irregular.  A lighter green is also used to hint that there are different trees and to build layers of light and dark areas. This small area took 2 hours to paint and the rest of painting will be covered later.

It is nice to see Don is doing well and my be home soon, get well soon.  This was about the sixth time it has rained on Tuesday night, what's up? Mount Tom gets detailed, and is still growing. Zorra Cement plant gets an application of gravel and other scenic details. The area of the first switch back is looking great. A new transformer is delivered to the power plant, and the mine has a few more buildings. The track arrangement to the meat packing plant and stock yard was changed. It will now have 2 sidings.  A stack of foam has been added to build a rock wall where the car float docks at the branch line. 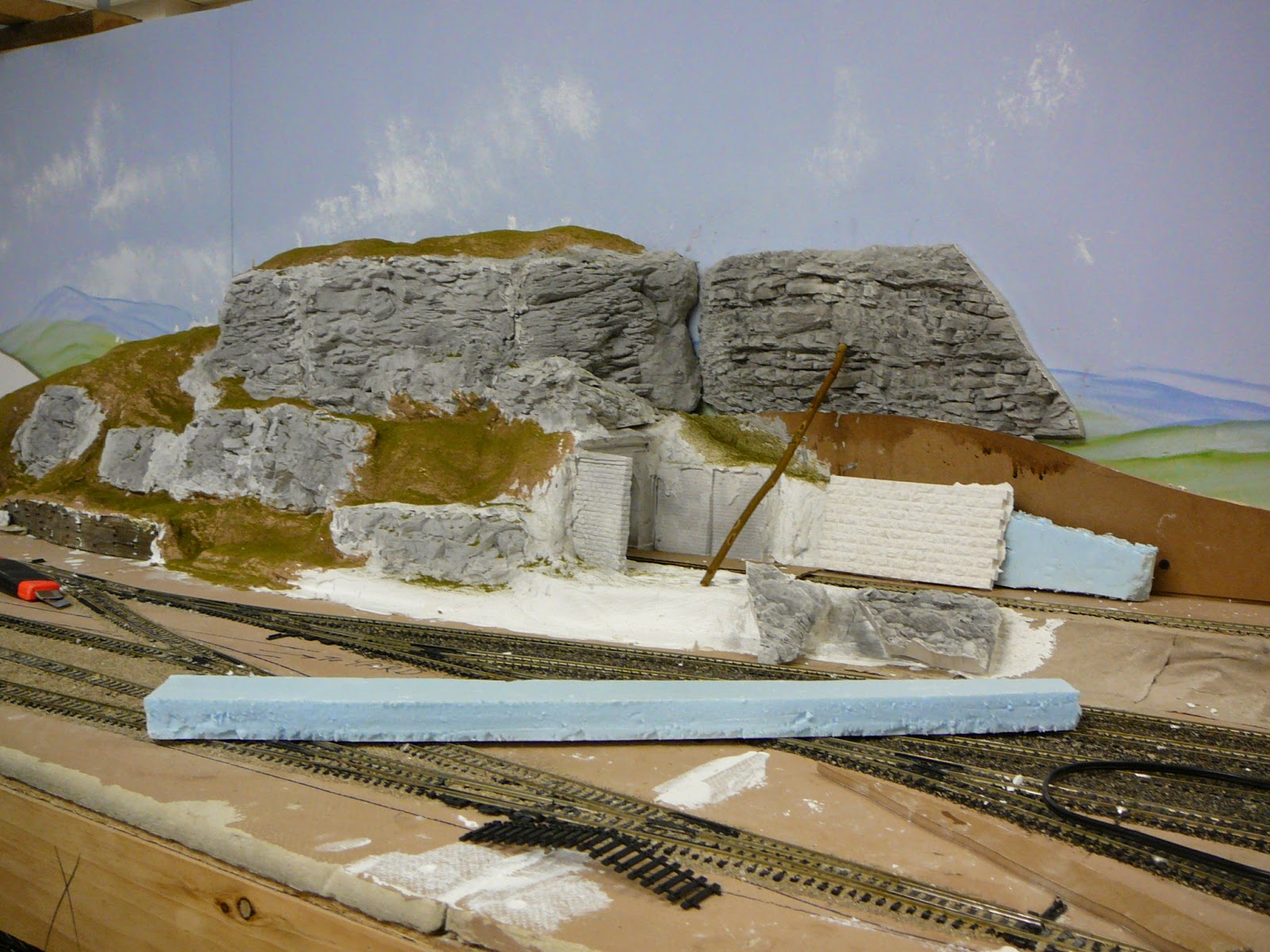 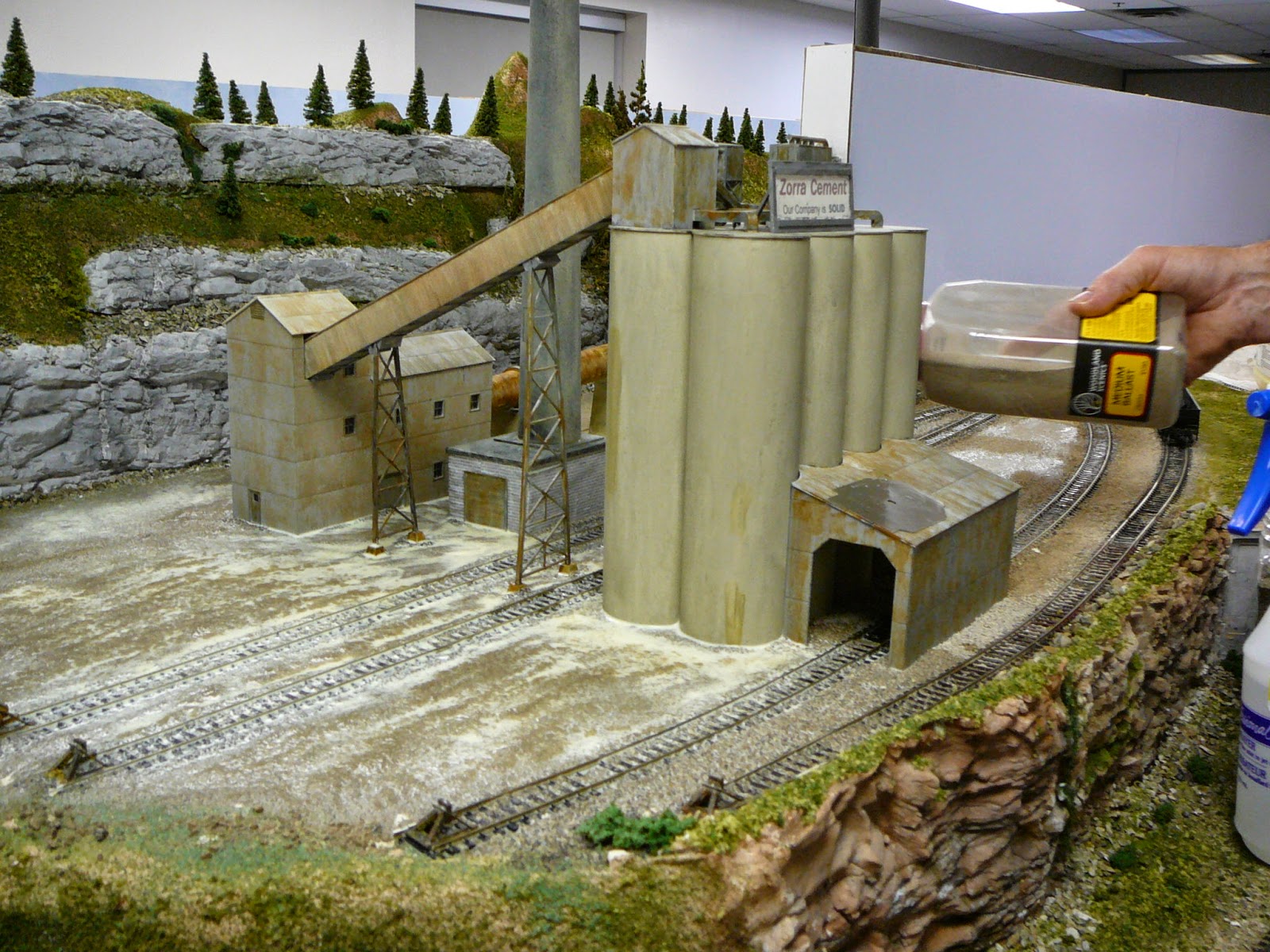 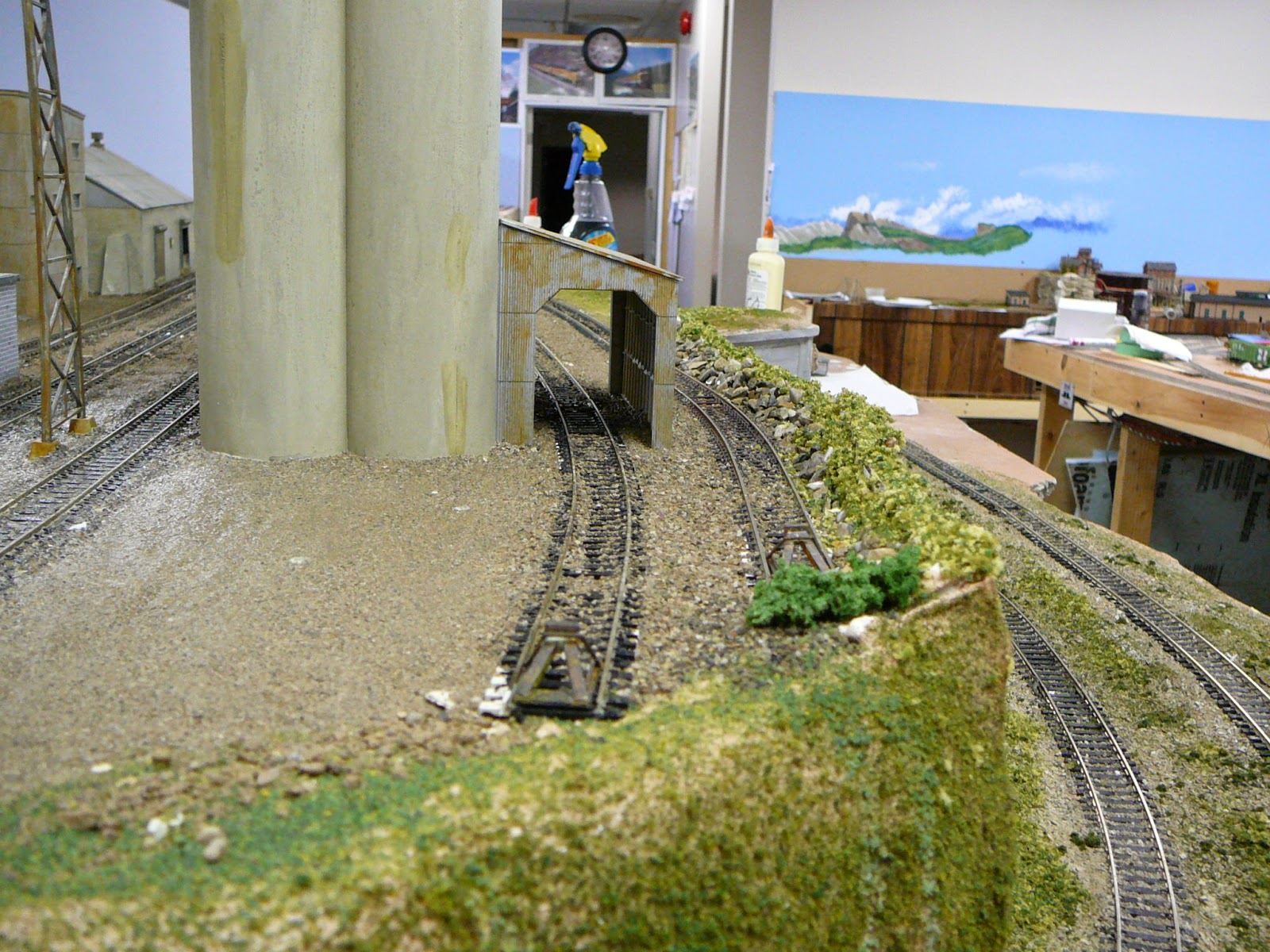 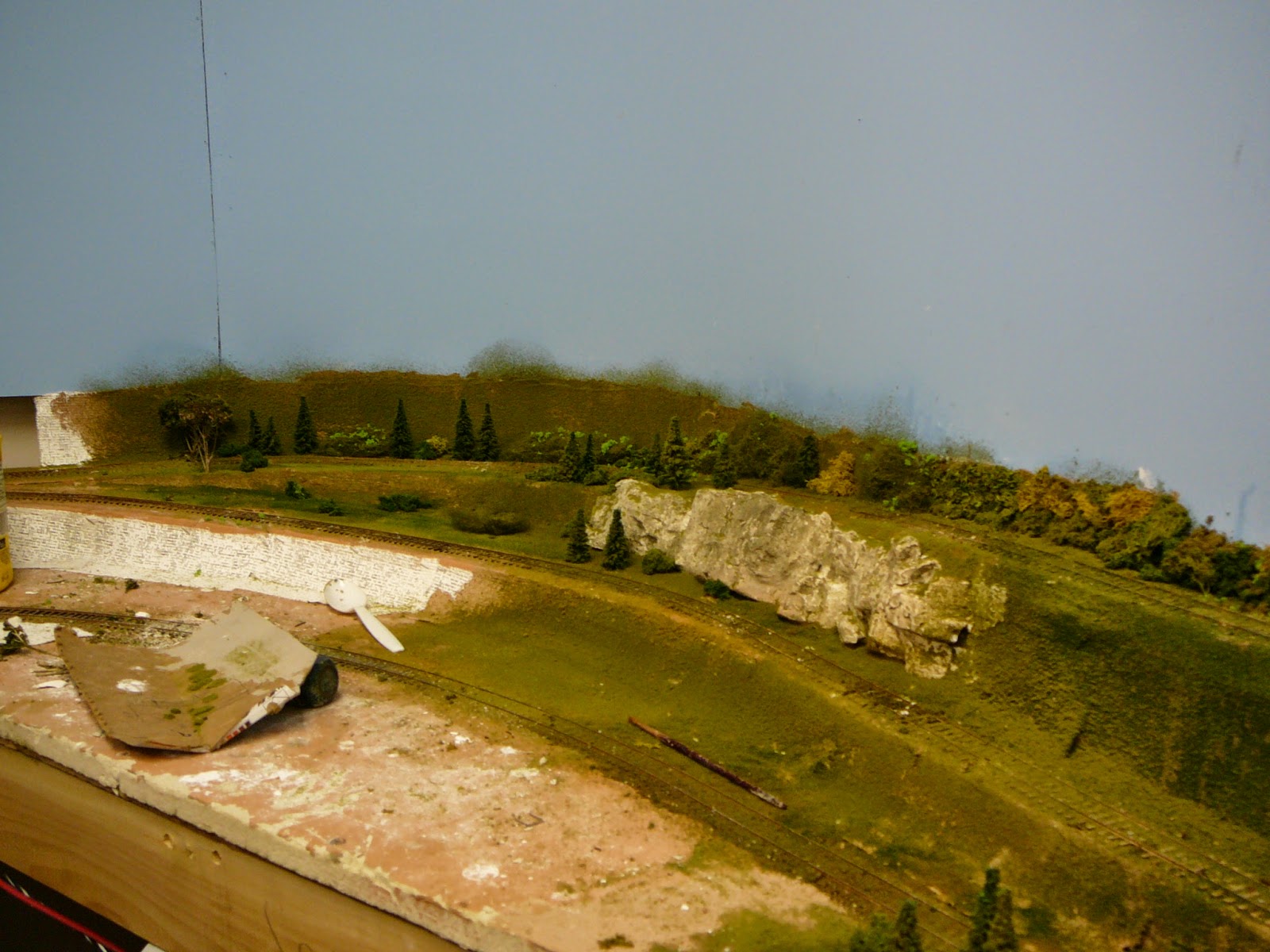 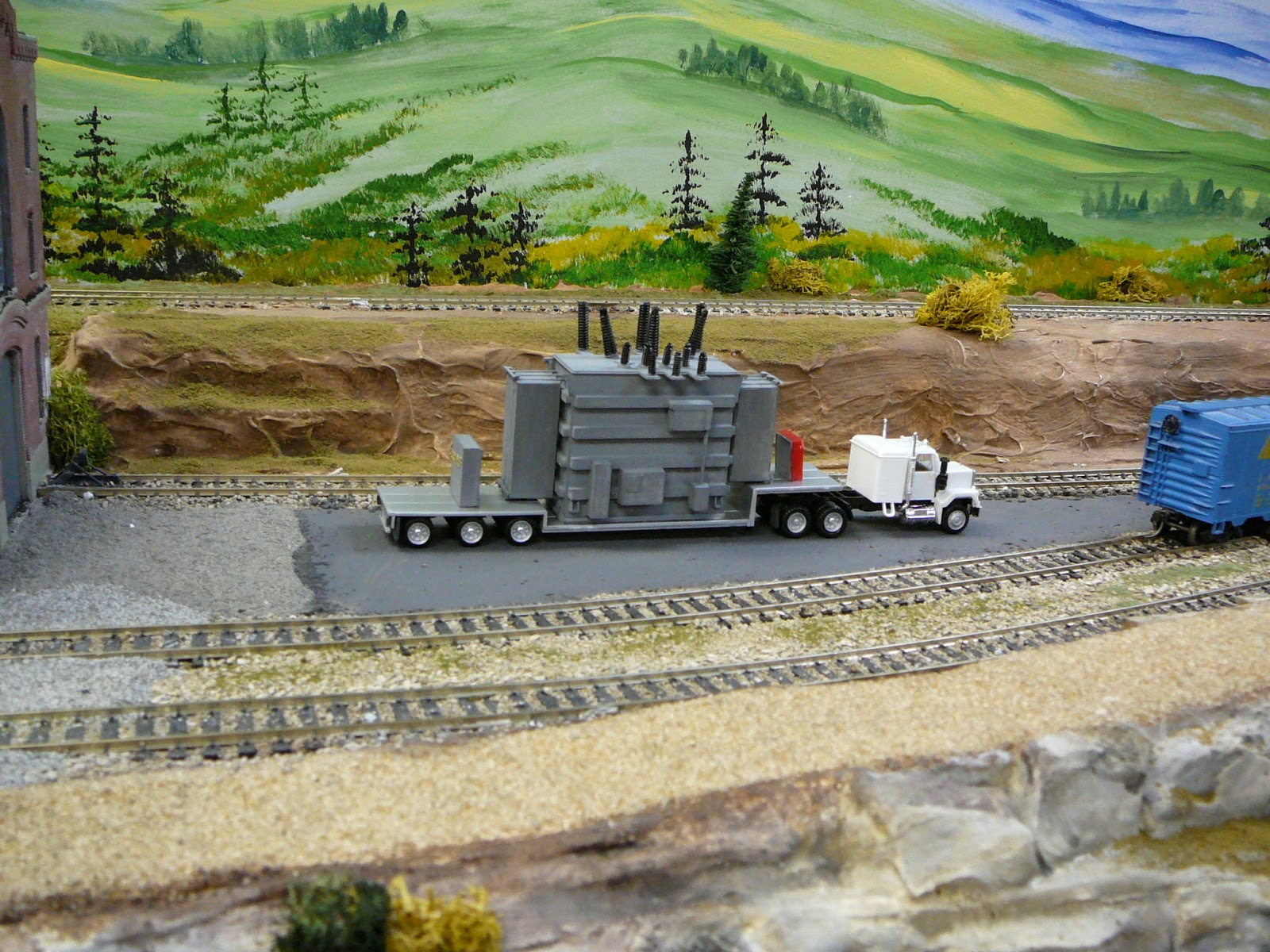 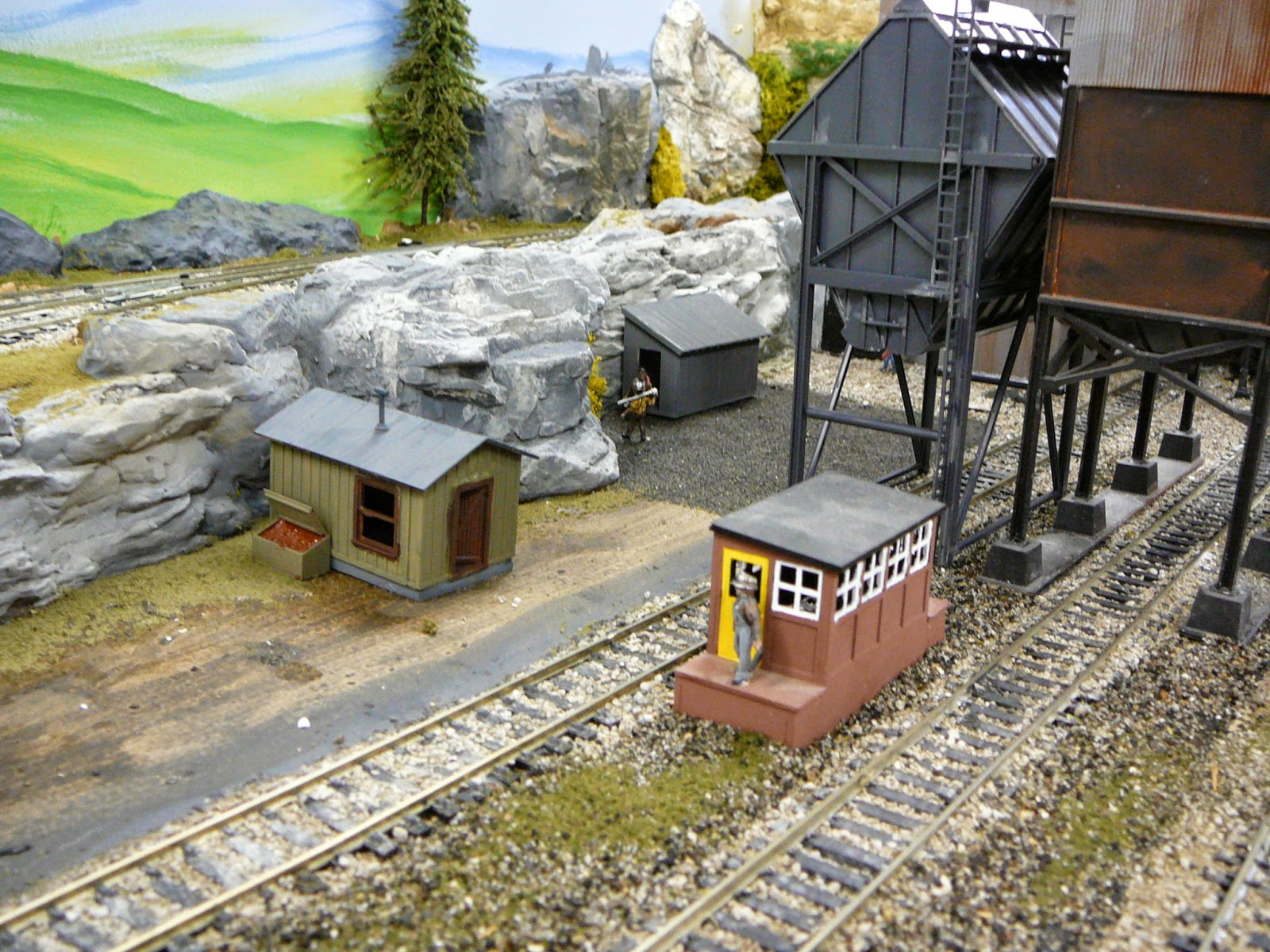 Glen brought in his Zorra Cement plant. It's an impressive 6 or 7 structure complex.  To service this plant we added a loading track, a track to deliver coal, and one to deliver bulk sand and gravel, and lime stone.  A couple of storage tracks make up the rest of the yard. There will also be a road into the area, for truck traffic.  Ralph worked on the branch line scenery and Jim installed a few plugs, and started putting ballast down at the cement plant.  John worked on the mountain near Lincoln, when that area is done we can run trains over the entire main line.  Glen applied more scenic details at Warwick station, and I painted a couple of roads and scenery around Springbank. 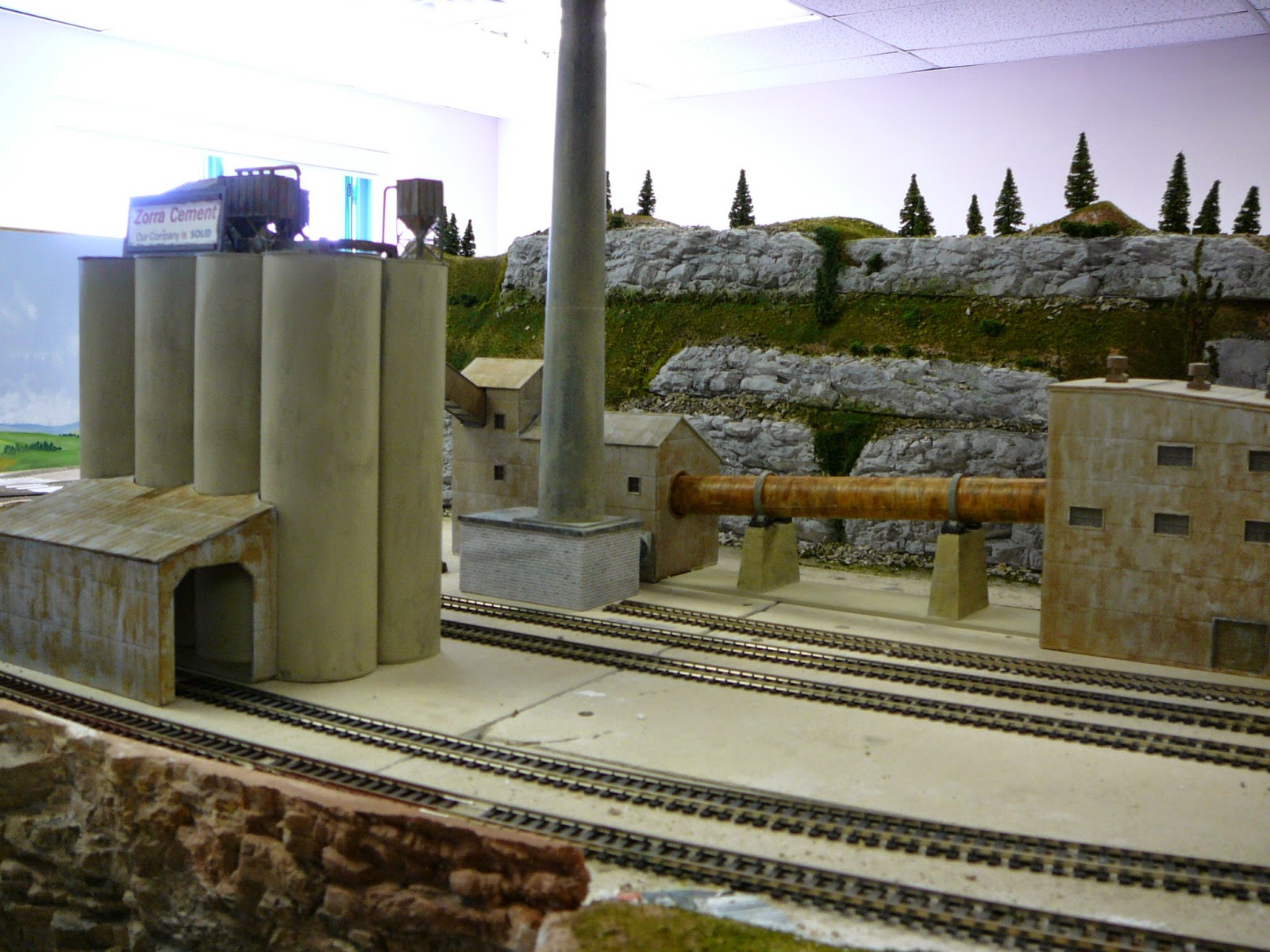 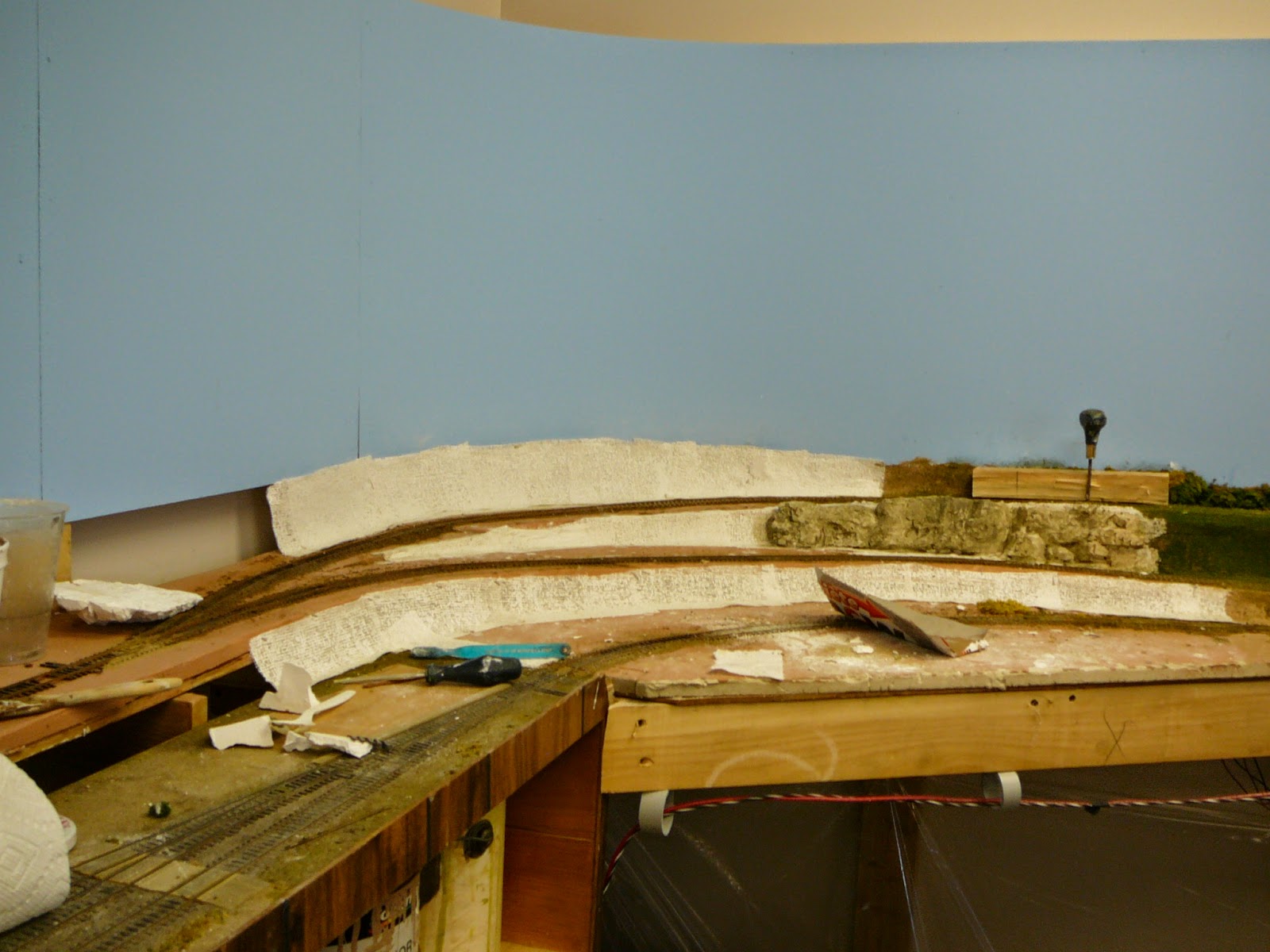 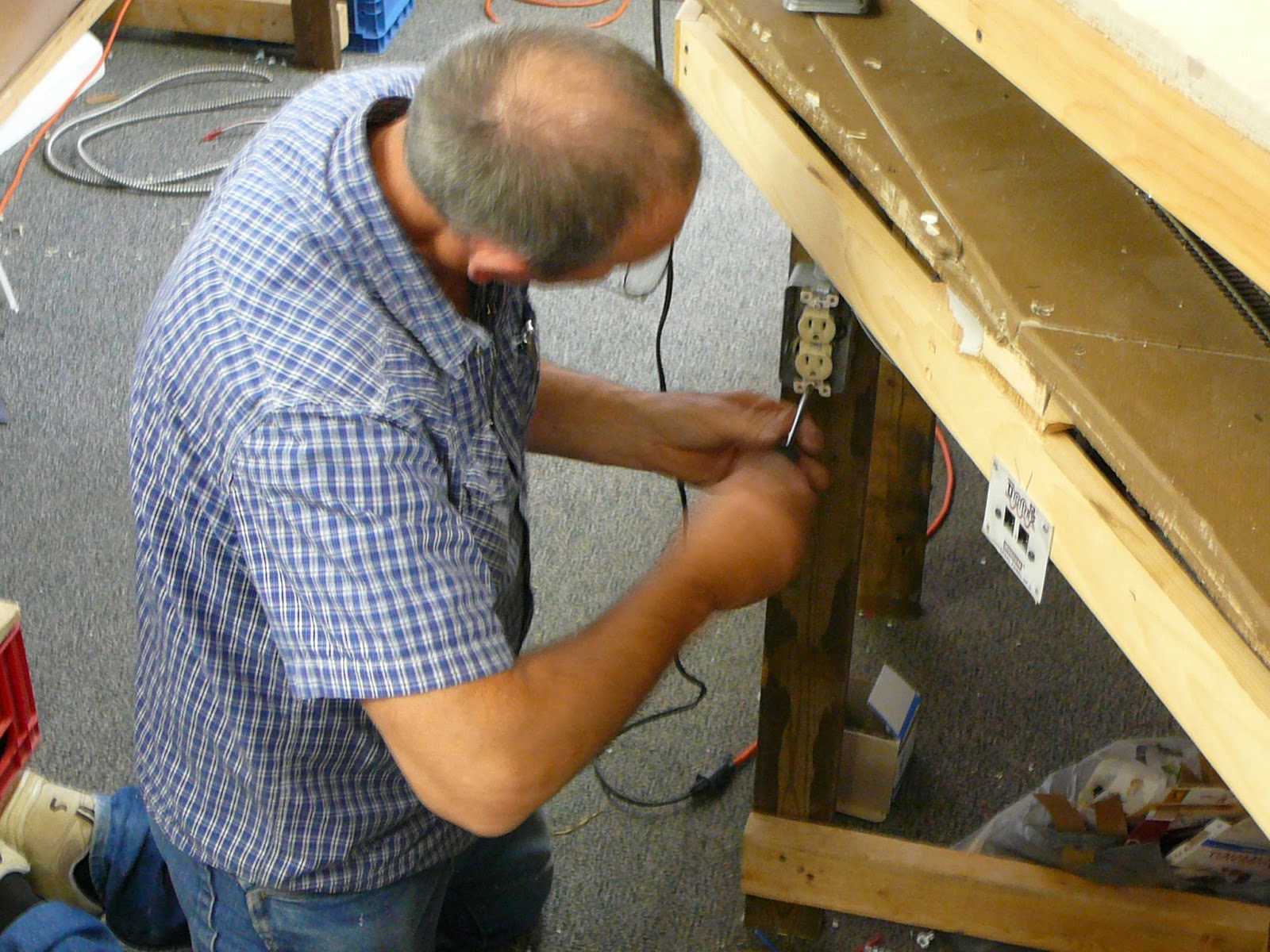 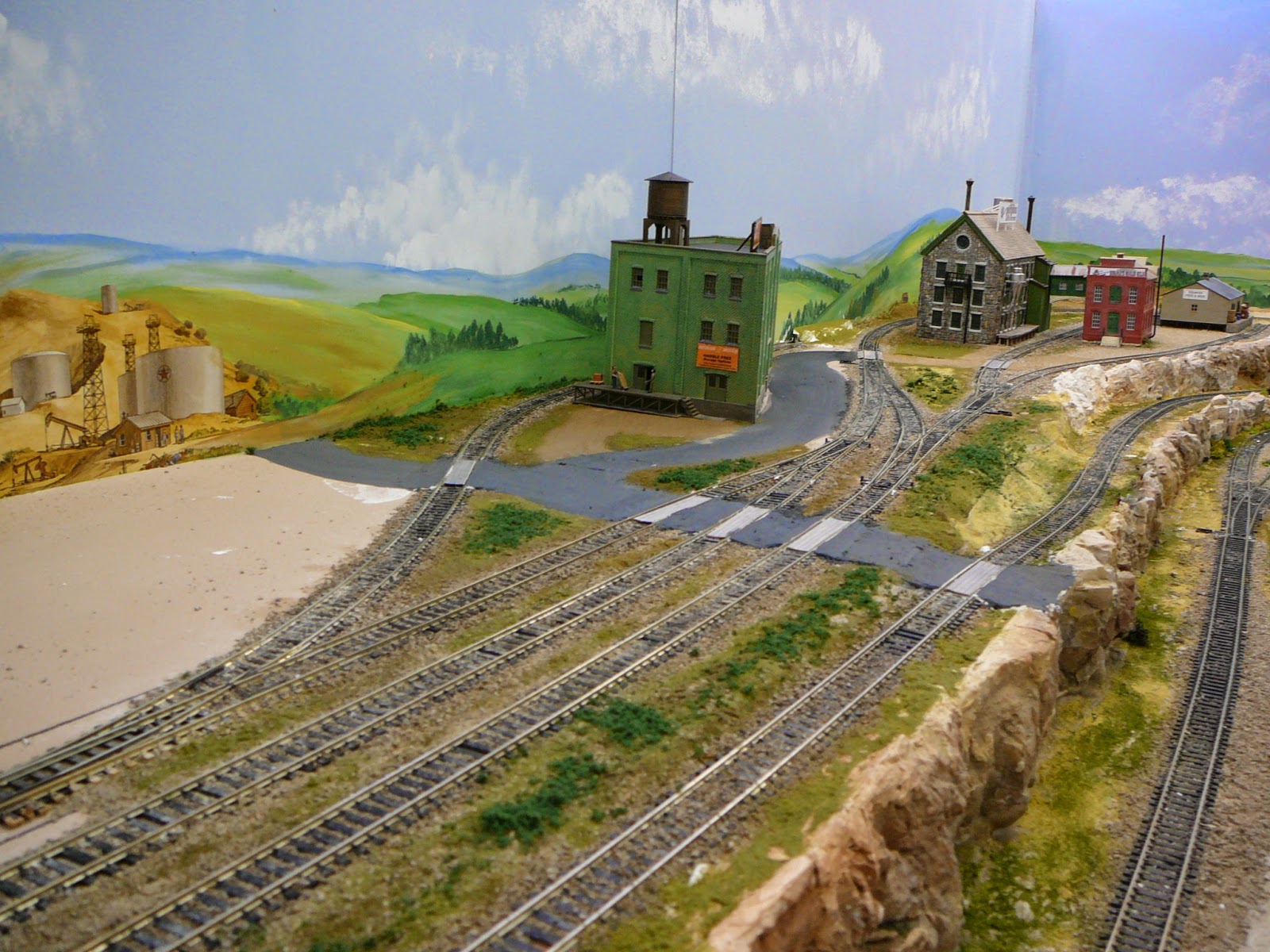 Scenery was the focus as several areas get attention. More trees were planted on the Quarry  ridge, ballast went down on different areas of the branch line and a couple of roads take shape. Track cleaning and repairs continue and the Mount Tom area was worked on. Glen made up some holders for our controlers. Even as some areas near completion, the harbour area and Wellington only have track and a couple of buildings. When you realize that a three foot area can take several hours to detail, we have a long way to go.

As the track cleaning continues, we continue to find minor problems to be corrected. Doug found a rail joiner under the rail, that took a bit to fix.  We also find dirty rails and wayward ballast and once and a while, solder above the rail head, all fixable. We're testing each rail with an engine to make sure the repairs work as we go.  There still seems to be conflicts with the DCC system, which are being sorted out, like programming an engine with three digits, even with a zero proceeding the number.  Glen continues to work on the Warwick station area and we filled in some gaps in the ceiling tile base.  A stop was added to help line up the car ferry platform at Northdale . Note no pictures as I have a PC problem.

Trent shows off his new locomotive, and Ralph programmed it for him. Now if only we had some rolling stock.  Jim worked on the quarry ridge which will soon be ready for the addition of the buildings Glen has ready to install.  Then the whole upper and lower loop area will be finished.  John installed piping and the loading racks at the refinery, now a few tanks is all that's needed.  Ralph decided to turn the turntable so the drive and covering shack will be out of the way of the coaling spur (I swear I had nothing to do with that change, I was painting backdrop on the other side of the dividing wall). Lol.  Someone left a surprise on Mount Tom, I'm not saying who, but it doesn't look Wright to me. 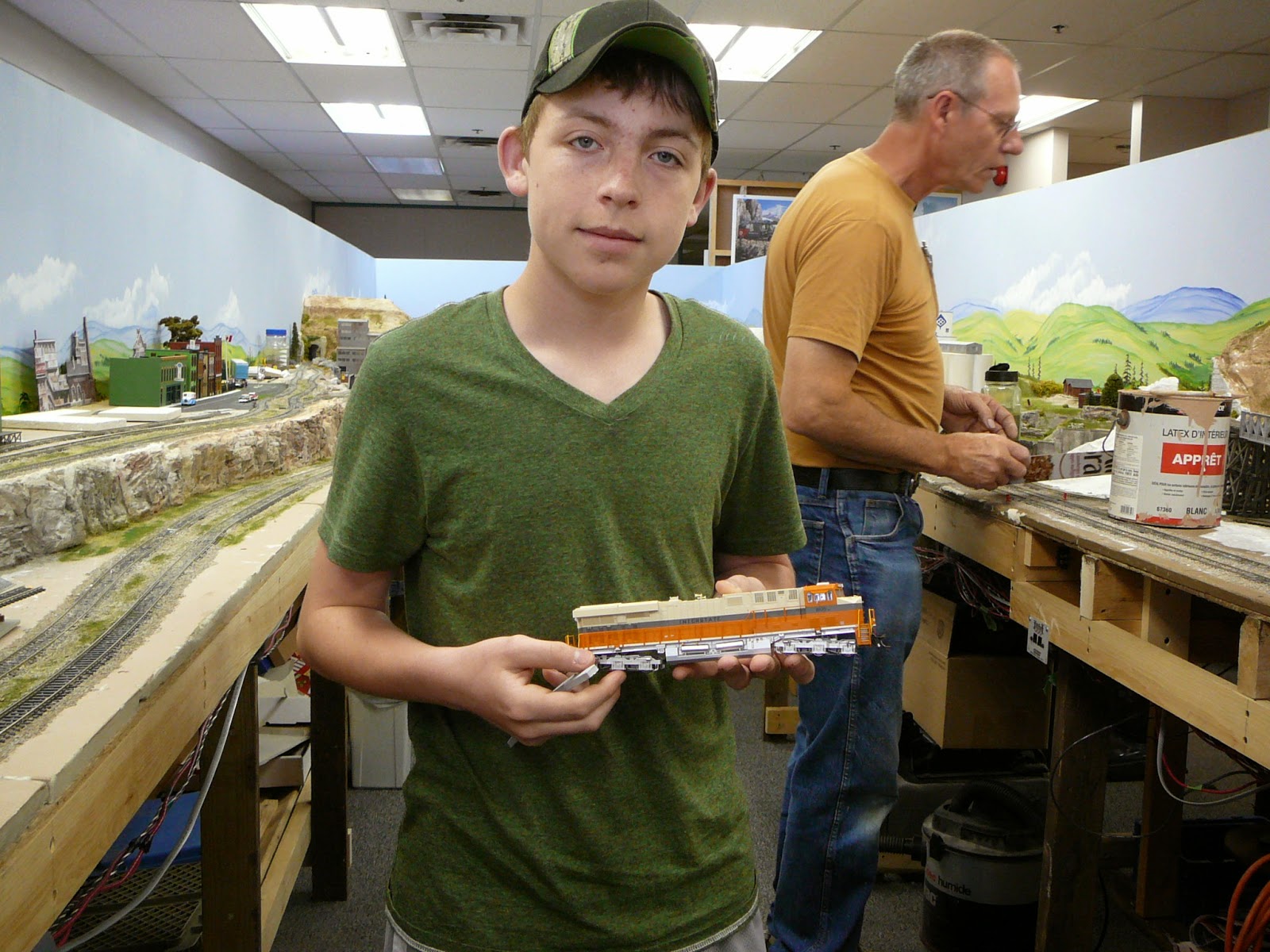 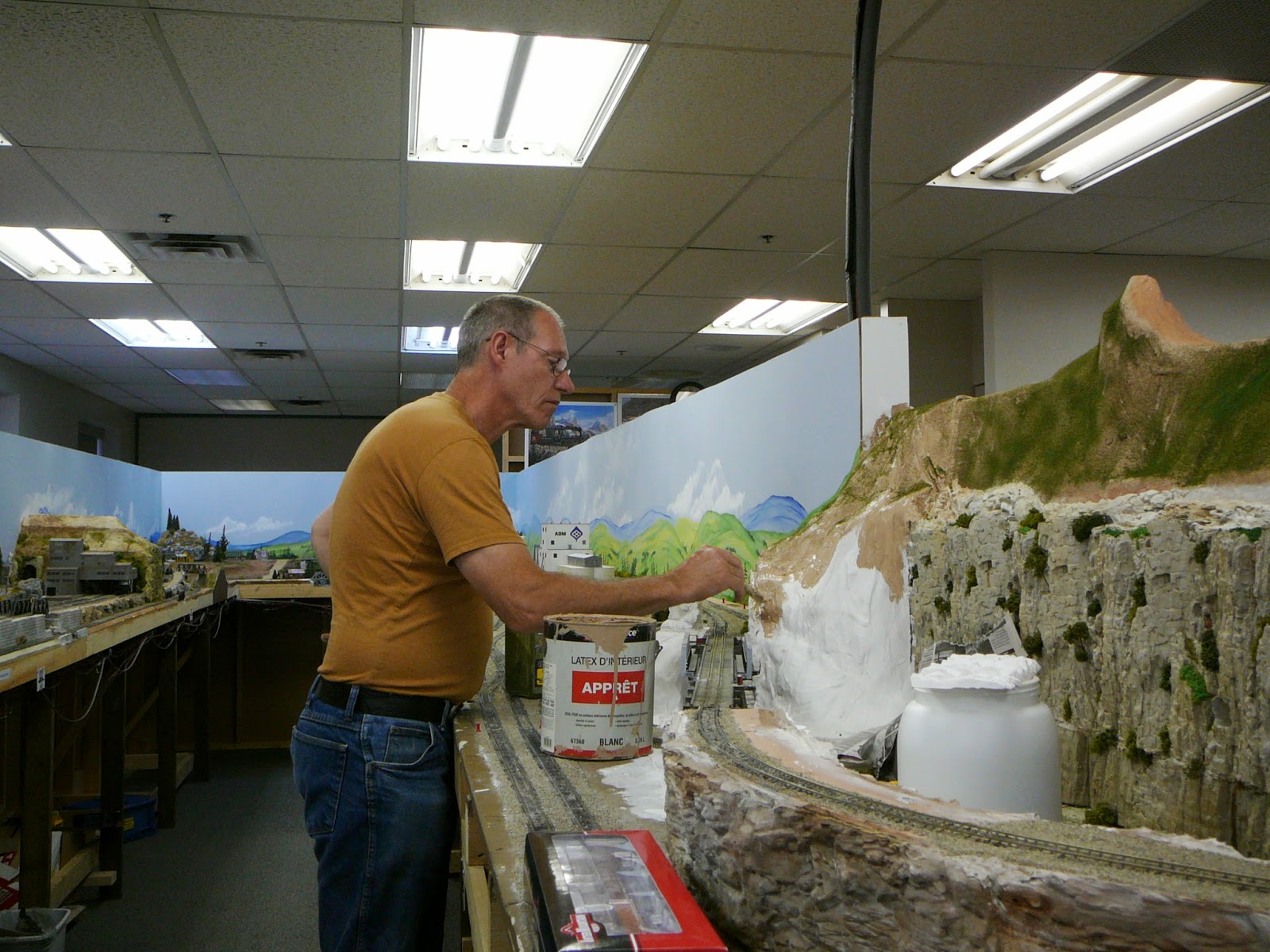 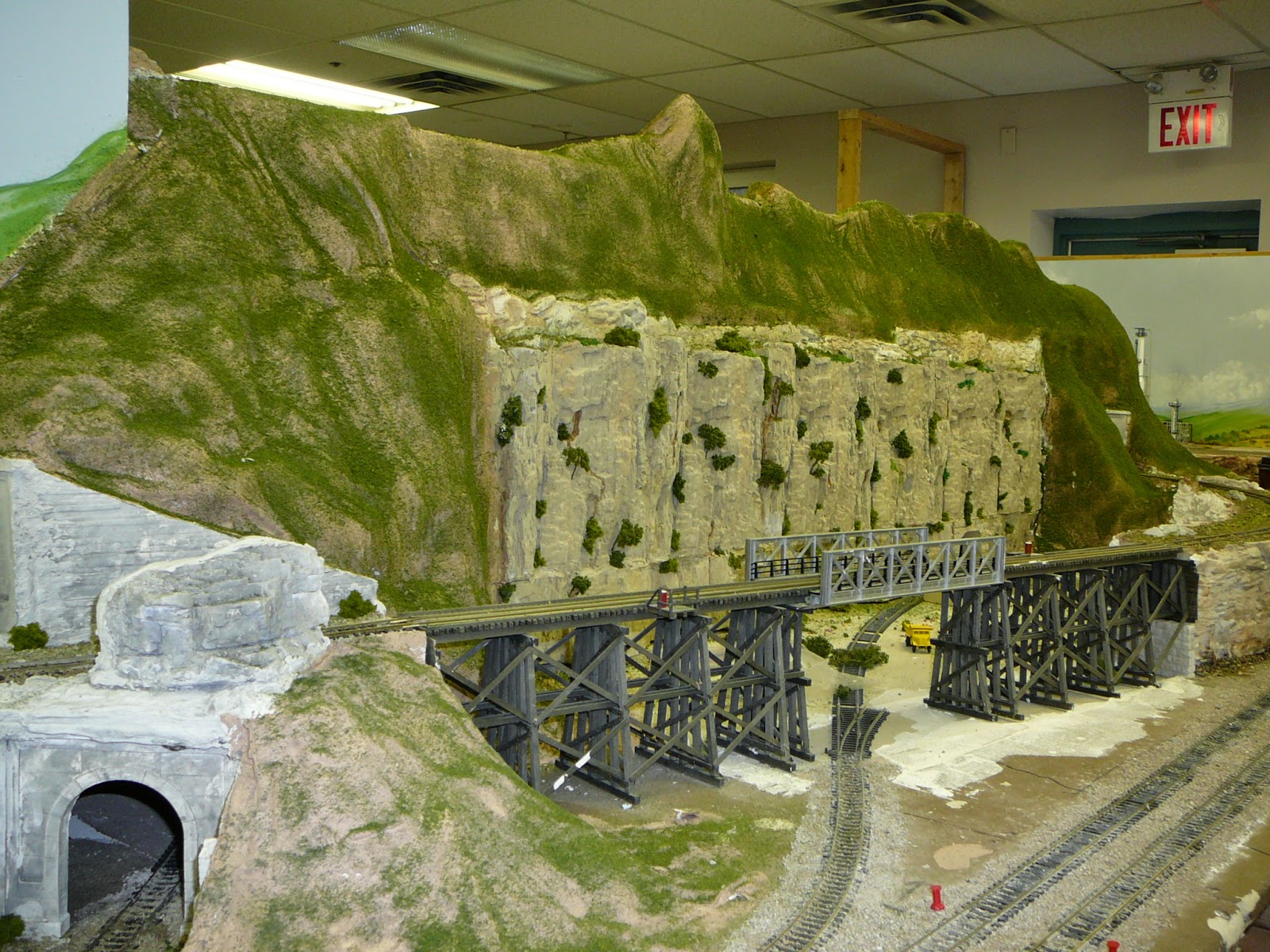 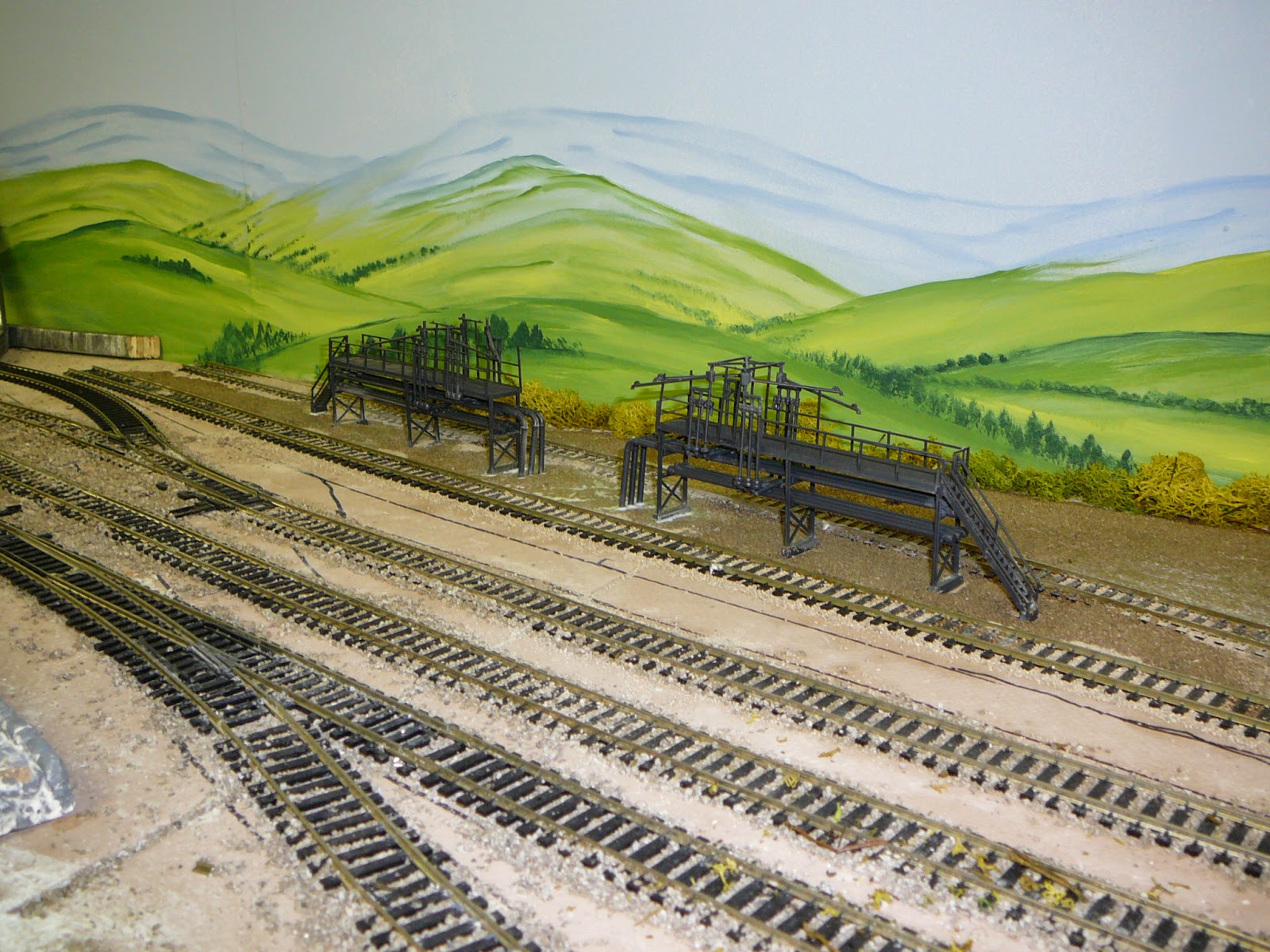 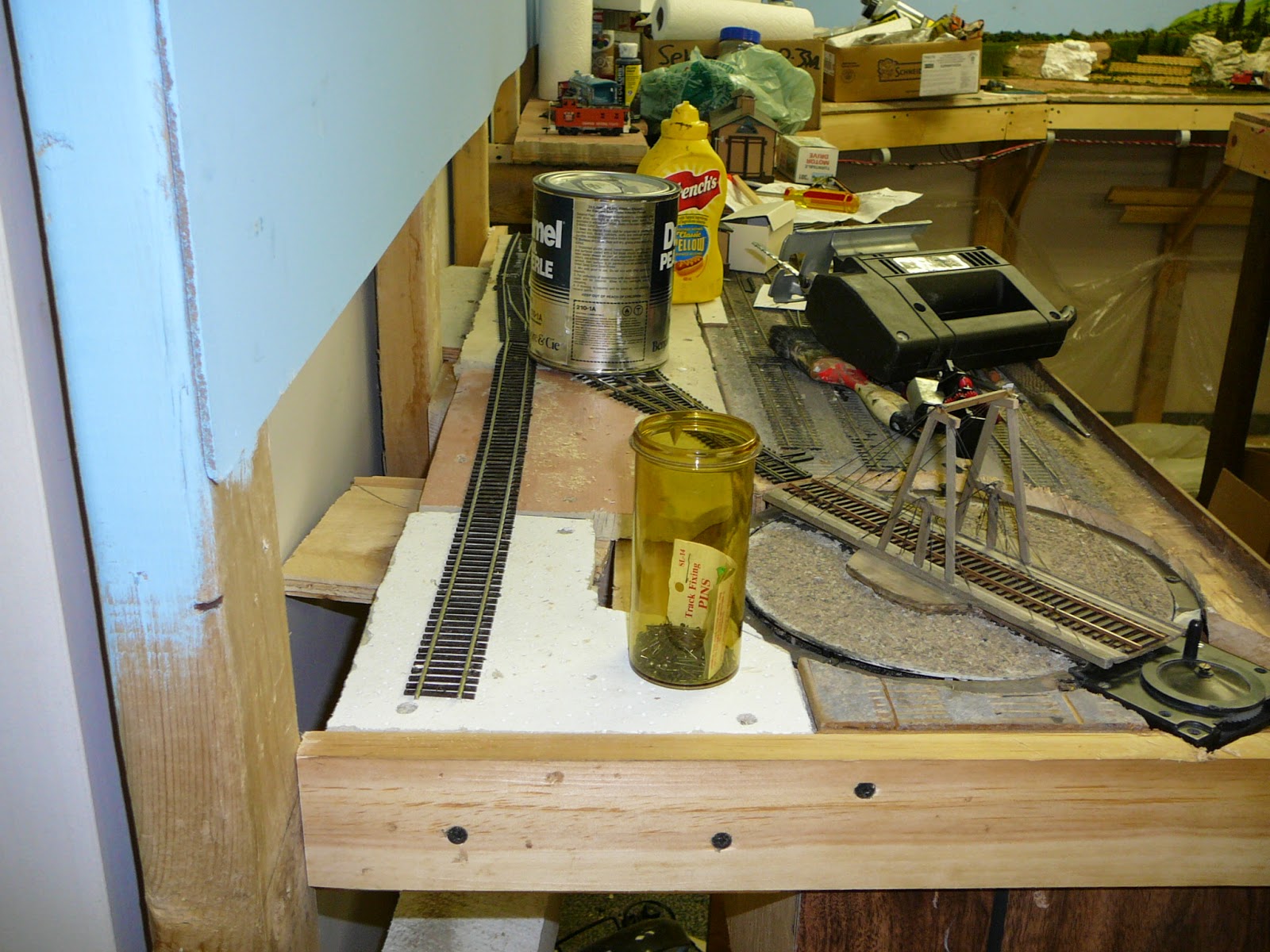 Vacations have lowered our attendance, but construction continues.  The two reversing loops were tested successfully. Two of us ran engines with track cleaning cars over most of the layout, fixing problems (mostly wayward ballast or solder) as we went.  Tom worked on the mountain near Lincoln and Ralph did more track work on the branch line.