We had a meeting before our session.
After discussing the rent increase it was decided that our dues would stay the same and Don will start collecting them next week.

Congratulations to Mike on his upcoming article in December's issue of Garden Railroads about turning your on wheels.

David displayed a trial run of his laser printed steamshovel he is working on. He will be adding more detail to it as well as separating it into more components.

Tom informed us that a friend wants hard covered  books on Canadian Railroads to sell in his shop. Money will go into our kitty.

Congratulated and thanked Glen on his talk on model railroading to a seniors group and his donation.

Jim told us he has a laptop the club can use if we get a JMRI system to program decoders in the future. 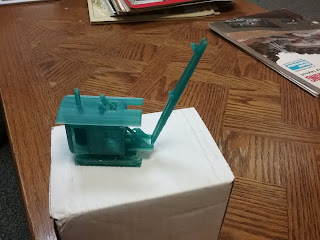 We had a donation of magazines from Gary, thank you, so the lounge was a buzz with people checking out the new reading material.
Trains were also moving. Glen seemed to be as busy replacing faulty rolling stock for repair as he was running his train. A big thanks for his ongoing efforts to get our rolling stock all up to snuff.
All of the time, planning, thought, and work that went into the Elsewhere changes seem to have paid off. With at least 9 staged trains at the ready when we start a session, trains move out quickly. The simple concept of rerunning trains with the same consists out of Elsewhere and sometimes out of Wellington keeps things moving. Our operators who have been running, all seem to have grasped the effect on our operations that the yard changes in Elsewhere have made, mainly no switching in Elsewhere. I'm sure as we all get familiar with this concept new and better ideas will arise.
Below we see Tom switching in Lincoln and Donald's train running past the harbour cargo yard. 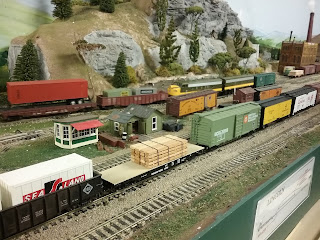 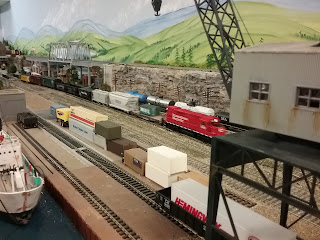 Jim pointed out a turnout in Lincoln was not closing in 1 direction, the over center spring was adjusted. Another turnout in Elsewhere had an over center spring added. The card boxes were also changed. All the Branch line cards are in the left hand, unpainted boxes and the Mainline cards are in the green boxes on the right. Wellington cards were also sorted out and put together in 1 slot. The cards for Zorra Cement Silos were increased to 3 cars as we have an abundance of covered hoppers. 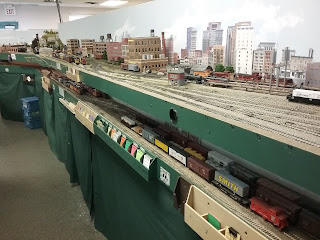 All the yards are staged and ready for Tuesday.
Posted by Larry at 5:11 PM No comments:

With only a few members out, we had lots of room to run. Installed some new card boxes to hold cards for trains staged in Elsewhere and Wellington. Elsewhere has been running without a hitch as far as I know. We may need to reduce the number of staged trains to achieve a correct balance in the yards. 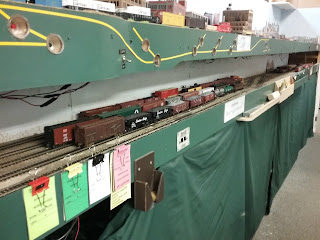 This was before the card boxes were installed, but you can see how Elsewhere is staged.

Mike has run his battery powered engine a couple of times now, he seems to be pleased. 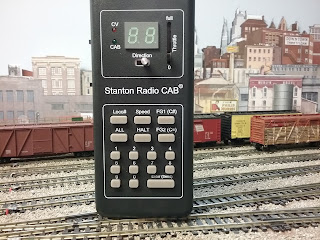 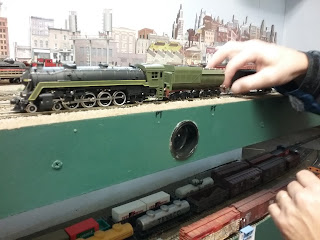 For more information check out his blog, a link to it is on the side bar. Pictured above is Mike's controller and the battery powered engine.
Posted by Larry at 11:43 AM No comments: