Into The Fall Season 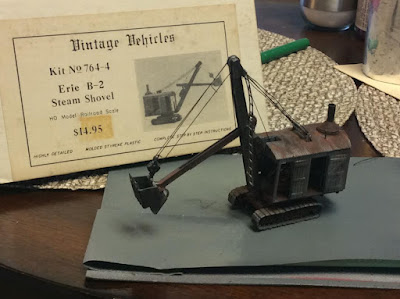 As noted in the previous blog, the basic layout scenery has been com-pleted and this provides the opportunity to add details to existing scenes or to the making of new scenes. This steam shovel with operating parts was made from the 1950's vintage kit shown by a club member and now resides at Oxford Sand & Gravel on our layout. Nice job, Jim. 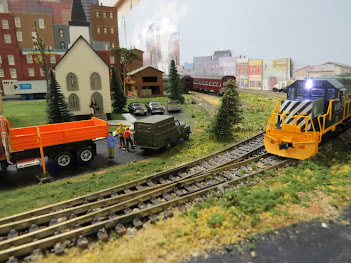 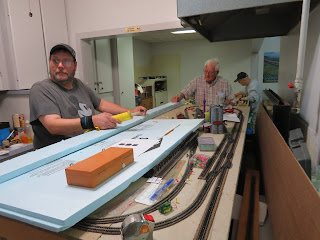 Summertime offers many distractions and the layout work takes a back seat to other things of the moment. When the fall arrives, serious work resumes.

Here Dave under Prez Don's watchful eye continues the construction of an N gauge layout in the Rec Hall's kitchen area. N gauge is half the size of H.O., the gauge of our main layout. 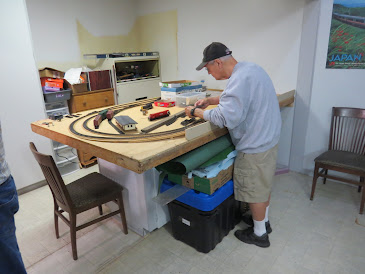 In another area of the Rec Hall, Rick is attending to the con-struction of a DC layout that is primarily for kids to run their own or club locomotives and learn how a real railroad operates. 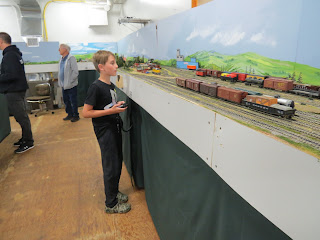 Tuesday nights year round are for operating sessions and here Colby, son of a new member, is running a train under dad's supervision on a recent Tuesday evening. Other members can be seen in the back ground following their trains around the layout. We sure do appreciate the wider aisles com-pared to those of our previous layout. Control is by Digitrax and allows for both plug in and remote controllers

Posted by Glen McDonald at 3:52 PM No comments:

We have reached a milestone. Except for a small campground, back on a hill and a few clouds, all the layout has had scenery added. So this post will be a few pictures of what it looks like now. 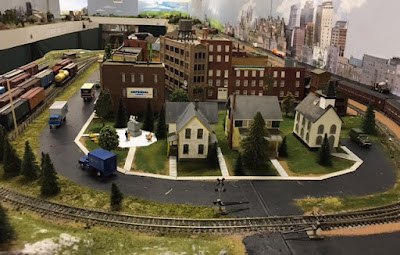 The town of Woodstock. This is actually a continuous running loop from Elsewhere to Wellington. On the left is a freight yard and on the right is a 2 track passenger car storage yard. 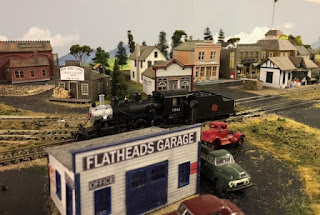 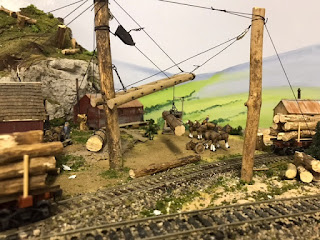 The town of Admiral is the end of the branchline. Connected to it is a log loading area. Circling below this town is the middle point loop of the mainline, which is mid way from the Elsewhere and Wellington yards. 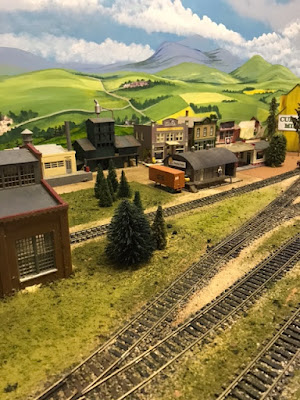 This is the town of Fidler on the Elsewhere sub. Standard Tube, Eureka Foundry and Cullen Mills are names of industries once located in Woodstock. Fidler is the name of the street our clubhouse is located on, well with the rerouting of Rathbourne, the section of Fidler we are on, is gone. You see our clubhouse was at one time the Recreation and Dry Canteen building for the Army Camp that was located here before the fairgrounds was built. All of out layout towns are named after streets in town, except for Woodstock and Elsewhere. 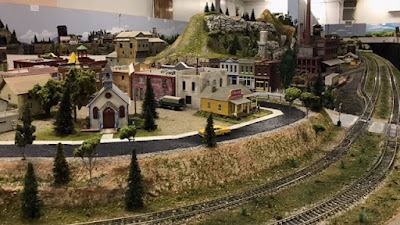 As seen by comparing the above 2 pictures, the layout has come a long way. We are currently working on a problem area in Admiral and installing a new yard connected to the Elsewhere yard. This work should be done in the next couple of weeks.

We will again be open in conjunction with the Woodstock Train Show on October 16th, donations will be gladly accepted. We hope by that time to have at least, all the base scenery in place, on the main layout, were almost there. We had a lot of interested visitors view the layout at the last open house a hope to have many more. We are located in the building to the west of the Casino.

The On30 scale layout is also, mostly completed. The N scale layout has some of the track laid and is slowly but surely progressing. The DC, HO scale railroad is running with some scenery in place.

At the monthly club meeting in March, it was suggested that we hold an open house for our layout in conjunction with the Woodstock Train Show on May 1. After discussion, it was loosely agreed to do so if logistics such as volunteers, advertising, layout condition, reliable track and switch operation, etc. could be met.

At the following April monthly club meeting, it appeared the above logistics could be met by May 1 and it was decided to have the open house. The room was tidied up, an escape route for emergencies was put in place, signs were organized and responsibilkities assigned.

We are pleased at the outcome on May 1. Weather was raw and rainy yet we had approximately 40 people - singles, families, train show venders from far and near across Ontario, one from North Battleford, Sask. and four who live in Scarboro but flew from Vancouver to Toronto and then decided to come to the train show in Woodstock [talk about dedication!]. All had either seen our layout open signs or heard a train show announcement about our nearby layout. Two trains were constantly running the layout and the fact that some parts are not yet scenicked allowed all to see how a train layout is constructed. Many, many good questions were asked of those of us who were volunteering our time and hundreds of pictures were taken. All in all, a great time for everybody despite the weather. Even some employees of the next door slots came in to see what we were hosting

A real benefit for us was to see our layout in operation in an open house mode. A major problem with our previous layout was aisles that were too narrow, leading to constricted areas when more than a few people were present. This layout's aisles handled those attending without any jams whatsoever. The layout design of a double loop allowed the continuous running of trains which is what visitors wasnt to see. For dedicated model railroaders, we could also offer switching at times to demonstrate our method of operation.

It was a good start to more open houses to come.

Most of the track is ballasted and track clean up continues. Everything but the turntable in Dover is wired and working. Although some scenery is down, there is a lot more to do. Even thought the layout if far from being completed, we will be open from 11 to 4 on May 1st, during the Woodstock Train Show. Our building it to the west of the Casino.

Drop in and see our layouts. The main HO layout has over 400 feet of mainline.  We also have a 23 foot On30 shelf layout, a small HO DC layout and have started a 2 x 8 foot N scale layout. There may be a couple of displays also. Hope too see you there.

All but the light over the DC, HO scale railroad, have had the diffusers remove, creating a much brighter layout. There is only a few more flip cards to be added, and throttle holders were put up in high traffic areas.

By adding some more hoppers, that were previously used to haul gravel, to the unit trains we now have 2, 10 car trains, 1 empty and one loaded. There still needs to be cars with horn hooks at 1 end and kadees at the other made. Flip cards still are needed for the single hoppers of coal loads.

In a couple of weeks the backdrop painting should be complete, at which point all the background building flats and pictures can be permanently installed.

Power and a control switch still needs to be installed for the turnout at the log pond.

Treasurers report accepted as read. We agreed that if a member joins the club, the fee will be pro rated at $20 a month plus $25 for insurance.

Our working  hours are Tuesday and Fridays 1 to 3 and Sunday morning. Tuesday nights 7 to 9 are running nights.
We will be open, to the public, from 11am to 4pm on May 1st while the Woodstock Train Show is on.
It was decided not to paint the fascia for now, but holders for controllers, in heavy traffic areas, should be added. Exposed floor tiles will be removed, for safety, and we took off the florescent light diffusers for more light.

The coal, unit trains will have a center section of cars with horn hook couplers until we have time to put on kadees.
Mike brought in his scratch built engine for us to see. 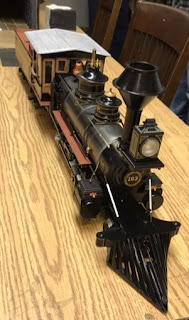 p
The Newfoundland Railroad had its first run, but scenery is still on going. 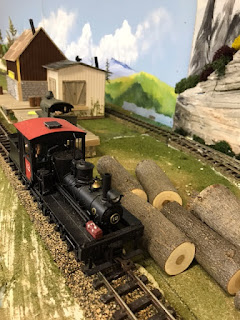 An uninvited Hobo, was found riding the rails. 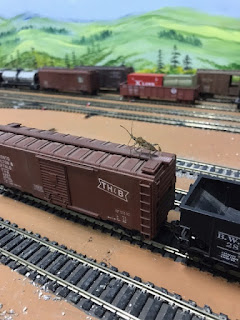 We are at various stages of construction, on 4 layouts, in 3 different scales. Of course the, HO scale, main layout is by far the largest covering an area of 23 feet by 50 feet. The On30 scale layout has legs 13 feet and 10 feet long.

The On30 scale,  Newfoundland Railroad has had a harbour and fascia added, also all the track has been laid and wired. The little DC, HO scale, layout is wired and running and has some scenery added, work on the N scale railroad continues. 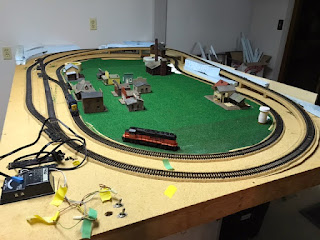 The main layout has some more scenery added and a few of the flip cards have been mounted on the facia. Now that all but 1 piece of the fascia has been installed, any gaps between the fascia and the foam are being filled in. 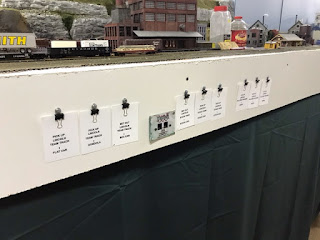 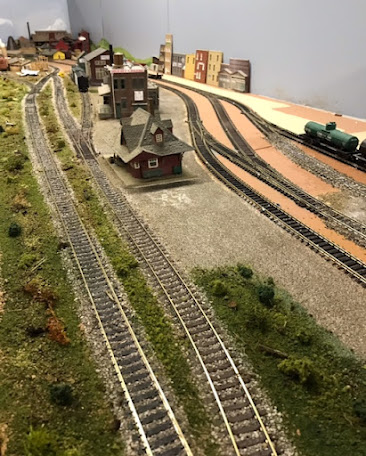 Meeting night is next Tuesday, a financial report, fascia colour, results of the last train show sales, items for sale, and if we will be open for the May 1st, Woodstock Train Show, will be some of the topics.

With all the elements of the electronics in place, the curtains were hung and the fascia was installed. 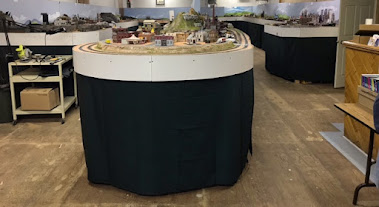 Scenery has been started along with ballasting. Nice to be starting this stage. 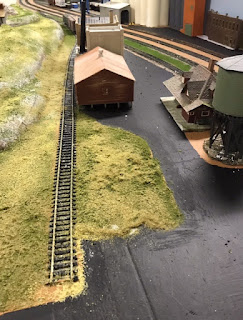 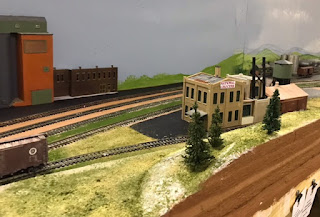 The backdrop also needs to be touched up. In this close up, a picture, a house, barn and cows has been painted into the scene. 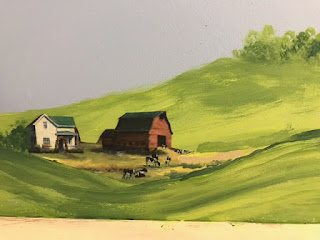 Our flip card system is up and has been tried out by some members. 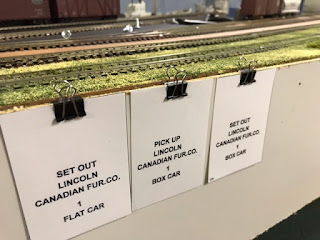 All but the Woodstock loop has been painted an earth brown colour.
Mainline feeders are done
All of the electronics will be checked and running after Jim's Sunday check.
Set out most of the good buildings. Some may need to be moved.
Someone took out the garbage bags, and a lot of boxes broken down and recycled.
Most of the clutter remove from the layout proper.
Cleaning up the tables in the lounge, to be replaced by the fold down, longer ones.
In conversation with Don P. Who has been operating his layout using the simple Set out, pick up cards, with good results. He has about 70 switching spots.
Next week we will be able to at least test run some trains. After that we could start ballasting.
Some buildings need to be repaired
Background needs to be touched up before permanently setting buildings.
More cleanup is needed.