As members feasted on the snacks that Glen supplied the Trains were rolling. Lots of goodies purchased at the train show were brought in for all to see. People always seem to find good deals there and by the looks of the parking lot, it was well attended.

Hear is an idea to get the branch line matched up with the no switching Elsewhere proposal. It also allows for switching in both directions and eliminates the confusion about branch line switching. First of all McKay Fuels, Wood Mosaic and Jackson Transfer become part of the branch line switching route, in other words not switched by the mainline. Then 3 branch line trains are set up in Elsewhere. Train A leaves Elsewhere with 4 box cars and 3 coal hoppers. The first card is for 2 box cars to Jackson Transfer, after switching 2 box cars for the others there, the train goes and switches 2 box cars at the Northdale Pier per the second card. Turning the engine on the wye, if necessary, it then switches the coal dock in Miller as stated on the third card. On the way back to Elsewhere it again switches the box cars at Jackson Transfer per the first card. Train B leaves Elsewhere with 3 coal hoppers, 1 box car and 2 short flats. The first card requires switching flats and a box car at Wood Mosaic. Arriving in  Miller the hoppers are switched at O. King Coal and the flats and box car at the sawmill mill. These flats and box car will be switched at Wood Mosaic before returning to Elsewhere.  Train C has 4 tank cars and 2 box cars. This time the box cars are switched between Jackson Transfer and Northdale Freight, both ways and the tank cars at City Service and McKay Fuels in both directions. This will tie up 16 box cars, 12 coal hoppers, 6 short flats cars, and 6 tank cars. Since this is means 3 Elsewhere yard tracks are only holding 19 cars the other 4 mainline trains should have at least 6 cars each for 43 in total. This would also mean that the switcher in Elsewhere can not switch Jackson Transfer or Wood Mosaic,  if 1 is assigned. The train order and cards remain with these trains, eliminating the need for branch line card boxes. Possibly train order cards can be developed that include the switching details, maybe on the flip side.
Posted by Larry at 3:59 PM No comments:

The club is back to normal operations. 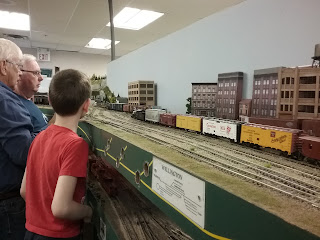 If the members decide to go with the no switching in the Elsewhere yard  idea of Don's we would need to accommodate about the same total number of cars in Elsewhere, or about 54 cars. That would require 8 tracks 6 feet long, which would hold 9 cars and a caboose each. With 1 track always open for an arriving train, we would have 7 tracks each holding 9 cars for a total of 63 cars.

The above image shows the changes in the right drawing. The bottom yard of 4 tracks is connected to the back track of the present run around and is double ended to provide an escape route for engines to the turntable.  The top yard is fed by the present front track of the run around and also has 4 storage tracks plus the extra back one being the escape track from the turntable, in effect making it double ended also. Note the program track is removed (to be located in the office). There is no need for a caboose track. The long lead to the top yard could be used as an engine loading track by gapping it.
Posted by Larry at 7:34 AM No comments: 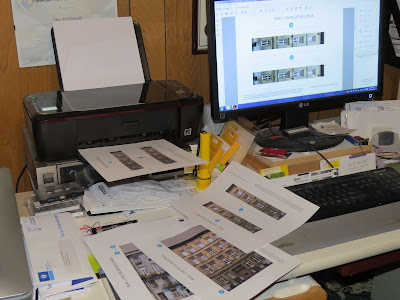 There are scads of internet sites to get both free and nominal sum pix of all kinds of buildings. Just Google the title of this post.
This shot shows me printing off a series of city buildings large and small that can serve to fill an exis-ting background space in our Wel-lington Yard. They will be a tem-porary fill in while we await more permanent buildings from  a soon to be dismantled layout.
I'm using a Pinterest site for these prints that come in HO scale com-plete with fold lines and ready to cut out. 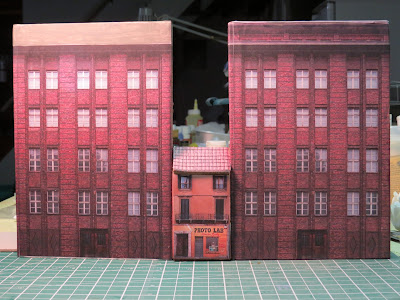 Here are three separate printed images fastened to frames as shown in the next picture. I used Elmer's spray adhesive to fasten the paper to the frames and Weldbond white ad-hesive to tuck in any stray edges. With spray adhesive, be sure to lay the print accurately on the frame as you won't get a second change to align things up. I would suggest that you print on heavy bond paper to avoid any "glue stain" on the image side coming through the paper. 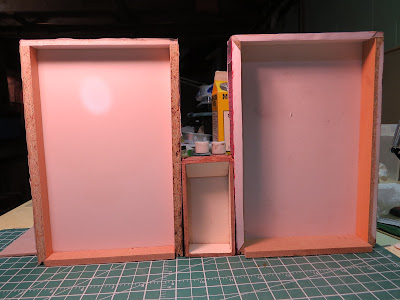 These are the frames behind the image buildings in the previous shot.
I used stuff from my scrap bin such as foamboard, some laminate floor scraps and hardboard to make quick frames cheaply. They do need to be accurately sized and square to fit the image fold lines as accurately as possible. You can see some of the fold tabs on the back edges but most I trimmed off with my trusty Exacto knife with its #11 blade. Am I begin-ning to sound like Cody Grivno in Model Railroader magazine?? 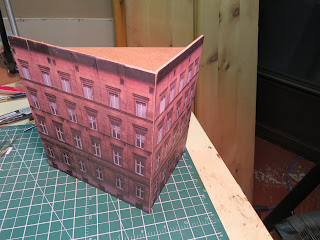 I did something different when assembling this building as I want it to stand out from the background. The frontpiece of this building came without the narrow sidepieces equivalent to one verical window section which were printed separately. So, to get the desired width of the left building side, I simply printed off more window sections, in this case, 2 more [each print covers 2 sections] and glued their tabs together before I used spray adhesive to join image and foam-board.  I used scrap materials for the underlying structure and added a top angled roof piece mainly as a brace. 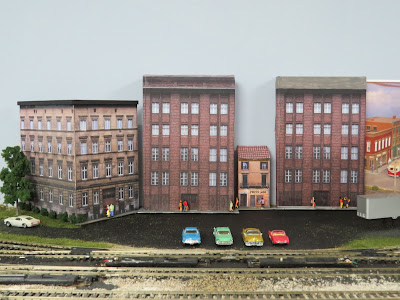 Here are the buildings in their Wel-
lington Yard location with sidwalks, pedestrians, vehicles and scenery in place.
The photo just visible to the right is of the future buildings for this site at which point these buildings will re-
turn to other paper counterparts on my layout.
Several of the club members com-mented on the 3D look of the images and they can make a nice stand-in scene for the right price. It's a fun way to add to your background that I've used for years.

With chocolate muffins to fuel the crew trains ran all night, thanks Rick. We were also please to host an exchange student from Australia, judging by her enthusiasm she had a good time. Conversation about Elsewhere plans specifically NOT switching there, got a lot of attention and questioning looks, but that's a good thing.  I even tried and was successful in finding new cards for the train is delivered to Elsewhere.  Still not sure if that will always work. Many things to look at before we proceed.

How one thing leads to another.

It's amazing how 1 idea leads to another.  Don mentioned that he liked the idea of NOT SWITCHING in the Elsewhere yard, just drop off your train and take 1 of the Trains already staged there, replacing the cards to match that trains consist. Well that would take some time searching for cards using our present card system as you might not find matching cards for that train, for that day. What  if you used cards from a different Day?  Why do we use a system with different Days? Oh wait a minute, why not use the same cards for that train, they could be stored in slots for each track, 9 slots in all, with 1 always open. It would take 9 turns before a train was rerun with the original cards. However as that train was switched the types and quantities of rolling stock may not be a perfect fit so the operator will only switch what is possible. Again this would throw off the day part of the card system. Is that a Problem?  If the day is ignored, they could be stored in 1 box, taking cards from the front and replacing them in the back of the pile. Another idea is to only switch trailing switches each way. The cards could be marked east or west. We could also use 3 cards with each train containing at least 1 for each direction. Yes you could simply use the lower loop and switch your way back to Wellington but then you loose the storage capacity of the Elsewhere yard.
It would work like this. Leaving Wellington you switch trailing switches arriving at Elsewhere. Turn your engine and move the caboose to the back of the train. Put the cards on the appropriate hook. Take the next staged train and switch the trailing switches back to Wellington, or switch your train, swap it in Elsewhere and switch it back to Wellington with its original set of cards.
This idea  should be tossed around as it has many merits.
Posted by Larry at 4:29 PM No comments:

During the meeting we discussed ideas about new members and up coming Train  Shows. With most of the construction complete a general cleaning was in order. The addition of a Simplex system to our Duplex one was approved.  When it becomes available, it will be installed, allowing the use of less expensive controllers. We also started adding more weight to our rolling stock, making most of them weigh about 3.5ozs. only 100 more to go. After the meeting we turned on the system to check for shorts, and we found 1. After an hour of cutting and rewiring the short magically disappeared, hope it stays that way. After all of that and some scenery touch up we called it a day.
Posted by Larry at 3:20 PM No comments: