All aboard! Lots of action and lots of trains running, good thing Barb sent in more cookies to keep our energy levels up, thank you.


Don took on the switching job at Herons Landing and I switched Lincoln, by the number of trains passing through, tons of freight got moved. Funny thing was that Herons Landing was busier than Lincoln, maybe we need to remove some cards for Herons Landing too. No Don I did not stack the cards, but that may be a trick to remember, wonder who is switching Herons Landing next week?
Posted by Larry at 9:18 AM No comments:

DUIVENBODE, Hank - Surrounded by his family at Sakura House, Woodstock on Thursday, March 3, 2016. Hendrik "Hank" Wilhelm Duivenbode in his 83rd year. Beloved husband of Shirley (nee Frey) Duivenbode for over 34 years. Dear father of Sylvia Duivenbode, step father to Brenda Kroll and her husband Mike and Brian Kroll and his wife Carol. Loved grandfather of six grandchildren and one great granddaughter. Predeceased by his sister Wilhelmina Styl. Hank was a member of Innerkip United Church, was an employee of Schneider's Meats for over 25 years and had a passion for model railroading. Friends are invited to join the family at theBROCK AND VISSER FUNERAL HOME , 845 Devonshire Ave., Woodstock, 519-539-0004 on Tuesday, March 8, 2016 from 12:30 - 1:30 pm, where the complete memorial service will be held in the chapel on Tuesday at 1:30 pm with Rev. Maya Landell officiating. Cremation has taken place. Interment later in Innerkip Cemetery. If desired, memorial contributions to Grand River Hospital would be appreciated. Online condolences at www.brockandvisser.com13033273
As a member of our model railroad, club Hank was always a great joy to talk to, rest in peace.
Posted by Larry at 3:20 PM No comments:

New name is Pete's Trains and email is petestrains@execulink.com

Same location as Doug's
Posted by Larry at 7:28 AM No comments:

An excellent plan for Lincoln

After the meeting on Tuesday, several of us looked at the east end of the Lincoln yard, by Union Ice. The initial idea about making a lead for the back runaround  was changed into making a new main line track to the front 2 runarounds. What this does is makes the old mainline from Jutland the switching lead and the front runaround a line for through trains like passenger trains, the ore train, and the branch line mixed freight. That solves the east end but the mainline would still be blocked at the west end while switching moves were being done. The solution was revisiting the plan to make the part of the branch line running past the station a runaround. This would make the outer loop of track around Lincoln the new mainline and the old mainline the west end switching lead. Wow, when heads get together we can spend lots of money, no, I mean come up with an excellent plan. 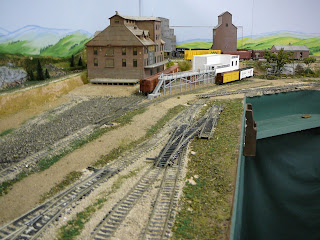 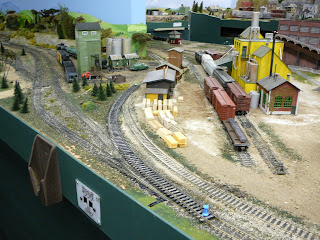 visual of the crossover which makes the outer loop a runaround. 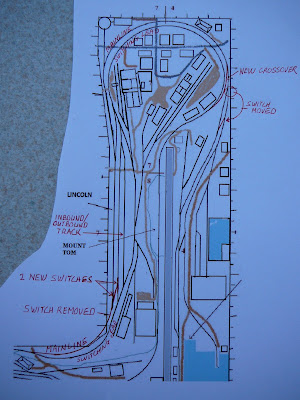 red lines are the new track proposed, on the top right is the new crossover which requires the turnout on the branch line be moved as illustrated. On the bottom left are the 2 new turnouts and the new mainline track. The old mainlines are now switching leads for Lincoln industries.
Posted by Larry at 11:07 AM No comments:

At the meeting a lot of discussion centered on the Lincoln bottleneck. In the end we all agreed that we should have a switcher at Lincoln, maybe at Heron's Landing also, we should run all the trains not just freights ( this could be done with train order cards), 2 man crews on all freights, we could make other runs like a tank car train from Shell Oil to Coastal Oil, while making up trains make sure each one has no more than 1 switching job in Lincoln, and reducing the car cards going to Lincoln. Agreement was swift that we should buy new peco turnouts for the Ortona yard, and get 2 lengths of track for the approaching, curved track. The old Sunset siding will now be Great Lakes Steel siding for ore cars, need to find a steel pland backdrop. The seeds for a future plan to lengthen the switching leads in Lincoln, freeing up the main line, was planted. The meeting concluded and various jobs were started. The approach track and yard ladder for Ortona was started, turnouts to the sanding rack were installed and some scenery was put in around Heritage Furniture.