Well here is the later. This is an operational change as well and a revision of other ideas talked about. Please think about this and comment. By adding a run around from the lower tunnel mouth east toward Herons Landing station, we would have a spot to hold through freights (no cards) from Elsewhere. A Train order would run this train to Wellington where another through freight, previously set out, will be returned to this spot. Elsewhere would only hold these through freights of say 10 cars, no switching, just swapping trains. To further remove Elsewhere from the mix, Wellington freights would go to Herons Landing, turn on the return loop, and return to Wellington. If only trailing switches were switched both ways, it would speed up switching allowing for more or longer freights to be run, especially if switching crews are stationed at Herons Landing and Lincoln. Coupled with the extra loading sites, mentioned in the first part, this would reduce the congestion in Wellington. The yard master at Wellington will make up through and switching freights and receive them and run through freights to and from Elsewhere to the spotting track at Herons Landing. It would be nice if the running of the through freight and swapping them at Elsewhere can be linked. The yard at Elsewhere can hold over 20 cars on each siding, so it could be cut in half and a new switch ladder added to the first 3 tracks. It would then hold six 10 car trains.
Posted by Larry at 6:14 PM No comments:

Projects to ponder, part one!

With the new year approaching its time to look at some work projects and some new ideas to ponder. First a couple of things in the works, installing the logging module and the run around at Pinehurst and, the power line towers Jim brought in. Another easy one is to add guards around the turnout switches, I will bring in some chair rail to see if that will work. If Herons Landing is going to have a switching crew, we may need to install some card pockets, there may be an extra 1 in the office. Jim suggested we add a coal bucket loader to the lumber camp, good idea. We should change some hoppers to limestone from coal, maybe the brown ones?  That's the easy ones.  We should add more engine loading sites, eg. Ortona, with a turnout behind the card rack or insulate the freight station siding and isulate the crane siding at Herons Landing, more on that one later (I wish I could insert a smiley face here). We could either move a siding from Oxford Sand and Gravel or add 1 in the pit area and move Shell Ind. there and use that siding as a team track, need to measure that one out. We have already talked about making another run around in Herons Landing by using 1 of the Coastal Oil tracks. More work to do this but it will improve operations by removing the steep grade from Sunset. That track would be lowered to join the tracks at Jutland. The remains of the siding in Springbank would be reworked into a team track.
Then the big one, Wellington. I will bring in a plan, but the things I see we want are, a bigger yard, a run around for that yard, industries moved to the east end and the mainline tracks move to the front.  Switching the industries should be away from yard switching.
Posted by Larry at 4:38 PM No comments:

We had a great group from Port Dover come up to run our railroad. After a short introduction and explanation of our card system of operation, our guests were anxious to get running. Our members paired up with them as conductors. It was very interesting to listen to their comments and observations. It was also nice that the system ran well! After the session we all enjoyed coffee and Barb's cookies, and conversation. All in all, it was a great night. Looking forward, I remind our members that work night is not next Tuesday, but a week later, to allow some of our members to make a trip to Port Dover to see Gord's layout. Projects for work night could include installing a new power supply, adding a new run around in Heron's Landing, adding a run around at Pinehurst, and installing the logging camp there. We also need to start planning the changes to Wellington and Elsewhere. We also should take a closer look at using and rewriting our Train order cards.
Below are a couple of shots of our guests hard at work. 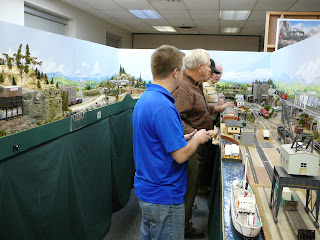 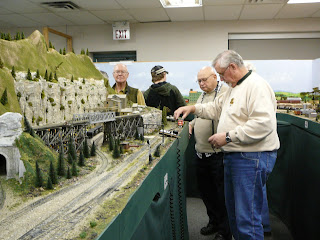 Pictures of some of the completed buildings making up the camp.

The camp needed a small office and 1 of Bar Mills utility sheds will fit the bill. The only change to it was to add a small shed to the back of it. 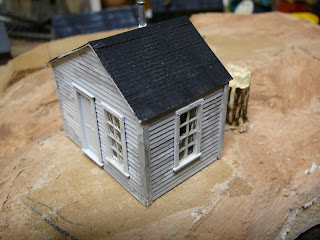 Woodland Scenics Tucker Brothers machine shop was the hardest part of this build with all the small details to paint. 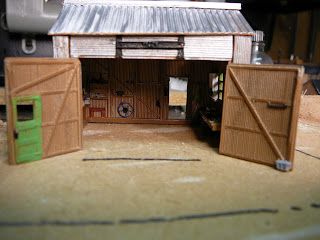 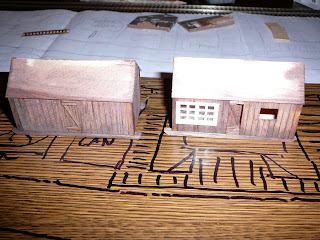 Don's 2 Campbell kits, bunkhouse A and B are similar to the Simpson kits, however I decided to make 1 a cook house and the other a Bath/Latrine House (idea from Serra West lumber camp). For the cook house to look unique one window was cut large enough to accommodate a 12 pane window. The door was also left ajar and the roof will be metal. Both buildings were weathered less than the bunk houses to make them stand out as recent additions to the camp.

I have always wanted to build a logging camp at Pinehurst. The opportunity came when Don brought in some old Campbell and Simpson kits he had. The first kit Don gave the club was a "man-houses" as some loggers called them. It is based on house 19 which now resides at Tuolunme. The measurements were taken of this West Side Lumber Co. type, by Russ Simpson in 1971.
I didn't use the scribed siding for the floor, as the doors will not be open, so instead of 3 we now have 5 houses. Using some planks sawn from a 2 x 4, I made new floors and roof boards, instead of the card stock templates provided. Clear acetate was then applied to the inside of each window and a roof support was added to each house. Various techniques like breaking out individual boards, making knot holes, and brushing with a wire brush were used to distress each house to varying degrees. A starting coat of stain and grey paint aged each house. A rough plan of the camp was drawn up to arrange all the buildings in some logical location. In the end I made 4 bunk houses and 1 storage shed. 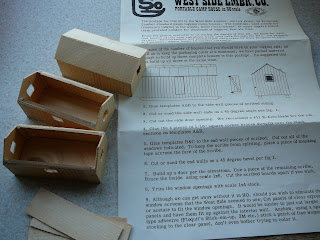 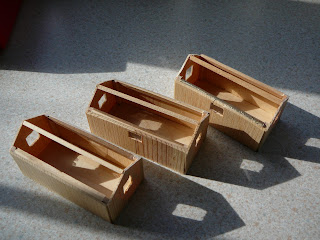 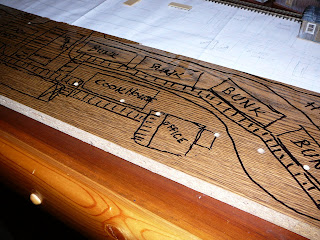 Signs were added to the 2 new industries and Industry Cards were added to start sending rolling stock to them. Jim worked on adding new plug ins to our DCC system. Three guests came to view the layout and talk to members, nice to hear their positive comments. A short meeting was held to update members about planned visits over the next few weeks.

Dues were decided for the year, now high school students will pay $50.00 a year. Younger kids are free but their sponsor pays dues. Moving the Cyclone Loader at Zorra Cement was approved as was adding a warehouse at the refinery. The new run around at Pinehurst is a go, and we are still talking about the one at Herons Landing. The turntable in Wellington was made to operate in a manual mode, to see how that works. Wellington revisions are also in the planing stage. Koodos to Mike and his research on our problems with the DCC system. Our first change will be to add another booster. It is thought a the sound systems are too much of a load as there is not the same erratic behavior when only a few trains are run. We will also try moving the radio transmitter to the top of the quarry hill for a better signal. Making it look like a radio tower was suggested.
Posted by Larry at 7:42 AM No comments: