The affine now has a new calendar and track gauge thanks to 2 of our members, thanks. After a boisterous discussion and research in the digitrax manual it was found that a person programming would have to push the program but tomorrow 4 times to program on the mainline,  possible but no likel. So the new program track will have a DPDT,  center off switch to select power from the program feed or the mainline feed. This is so the programmer can test the engine after programming it.
The nights session set up. First trains ran were the log Train,  on the branch line and a mainline Passenger Train. A Lincoln only freight then left Wellington.  Next a branch line mixed freight and a Herons Landing only freight left Elsewhere.  Other trains at the ready were a covered hopper unit train, a first I think and another Lincoln only freight, to be dispatched after the  first one is completed.  These staged trains are trials to test out ideas to relieve mainline congestion. 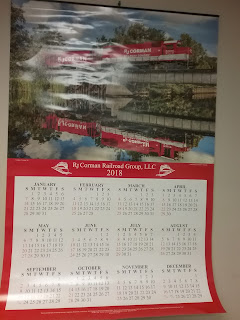 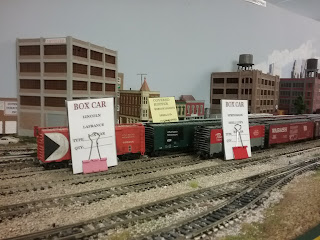 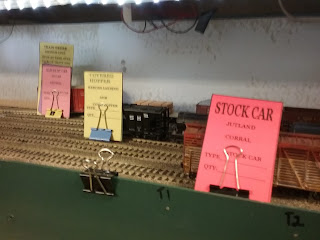 Staged trains in Elsewhere and Wellington.
Posted by Larry at 7:56 AM