The Little Train That Couldn't Did - Last Episode 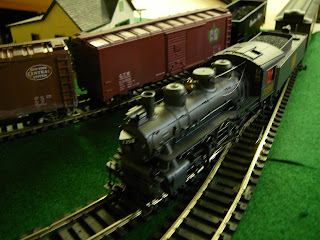 Well, it's been awhile since we checked in with Engine 7358 and its 4 Canadian National cars desperately seeking the magic switch back to the Sub. When last seen, the little train had endured diesel jeers on the Ontario Western and the pas-sengers, despite seeing great vistas and having interesting experiences, just wanted to go home. They were giving the conductor a hard time. Just at that point, the little engine saw a right hand switch that looked vaguely familiar. Instead of saying "Peco" as the magic word, the engine tried "Atlas" and his steam pressure soared as the switch points opened. Was the little train back on the Sub?? Nobody knew at this point but were very hopeful. 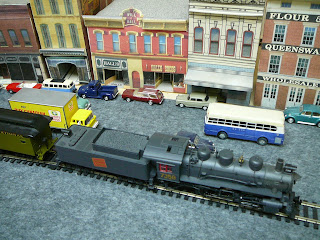 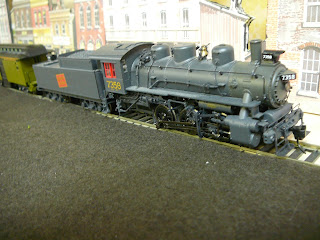 Up the line went Engine 7358 and everybody on the little train held their breath until the town of Nowhere hove into view. Oh yes, there were the familar stores and the Ford Transit bus of the Bluebird Coach Lines. Why, even a White Rose truck drove alongside. They hadn't been seen since Shell Oil bought them out in the 60's. This was truly the Sub called the Nothing and Nowhere RR and they were home again. Cheers rang out from the passenger cars as they slowly steamed down the main drag. Horns honked and there was great excitement as Engine 7358 slowly pulled the little train into the station and the conductor helped the passengers off.

All too soon the celebration was over and the passengers had departed. The parking lot was empty of vehicles. The little train was left all alone huffing almost silently except for the occasional cylinder pop off valve letting off little steam blasts. The conductor had not returned from the station with a train order and the little engine had a disturbing hunch that something was up. Finally the conductor returned and, with a sad look, told Engine 7358 the CNR was closing out the Sub and he was to go park on a yard lead with all the other retired equipment. 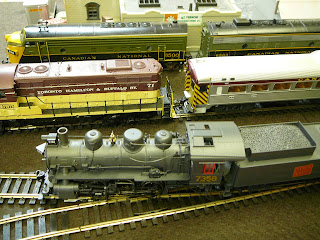 With great regret, the engineer made his last run by taking the little train the short distance to the yard. It was a sad day for the N & N RR Sub. and even sadder that Engine 7358 was having to park beside "those diesels", especially a CPR RDC. Where did that come from?? A lot seemed to have happened since the little train wandered off the Sub and, now, only the memories would remain. But they were mostly good memories
that would never have occurred if the switch mistake hadn't taken place. Like they say, "it's an ill wind that doesn't bring forth good weather"or
something like that. RIP Engine 7358 . . . . .

Posted by Glen McDonald at 8:52 PM