The Little Train That Couldn't - Part 5 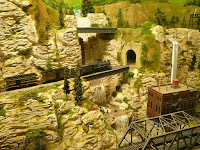 Rejected and dejected, Engine 7358 continued rumbling up and down steep grades along unfamiliar tracks and tunnels. Despite
their concern at being totally lost, the conductor and passengers were in total awe at the impressive scenery they were passing through on this Ontario Western Railroad. It was totally the opposite of the flatscape of the Sub. But where were they to end up?    Nobody knew. . . . 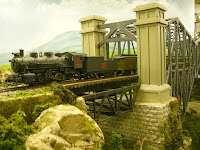 By this twist of fate, the little engine felt very important travelling through this rugged landscape and through impressive bridges like this one. The Sub only has a couple of low level frame trestles along with simple culverts for the most part; nothing to get very excited about. The passengers continued to be distracted by scenery they'd never seen the likes of before. . . . . 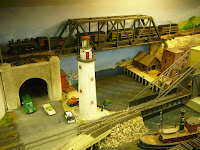 Why, they even passed through a port area with a lighthouse and a
boat channel. Boats were even tied up in the harbour; things never to be seen on the Sub. An Ontario Western freight train was spotted shunting cars on the lower level but Engine 7358 didn't want to have anything to do with another arrogant diesel. Side rod clank was kept to a minimum so it wouldn't look up and see the little train running the high line. 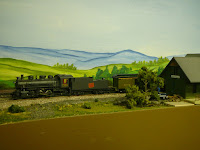 Eventually, the little train arrived at a station called South Durham.
Knowing that both water and coal supplies were running short, the conductor herded the passengers off the train and into the station for a meal and restroom break. Engine 7358 was able to replenish its needs nearby. The conductor asked the station agent about a way back to the Sub. He didn't know himself but thought that the agent at the Oxford Station ahead might have a suggestion. 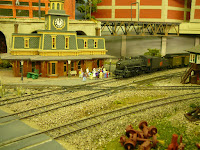 Eventually, the country landscape changed into an urban one and the little train slowed and then stopped at an impressive train station called Oxford. It even had a clock tower but, like many others, the hands were stopped at 12 [am or pm?]. This was a busy station and the passengers were glad they had their break at South Durham. The conductor wasted no time in finding the station agent who thought one of the three tracks would take them to the Sub. But which one?  Nobody really knew. . . .

Posted by Glen McDonald at 8:57 PM