Actually the day started out with a visit to see Rock's garden railroad. During this last run of the season, rick ran a lash up of F units and a 2-6-0. See pictures below. 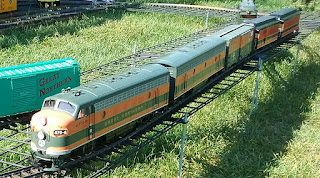 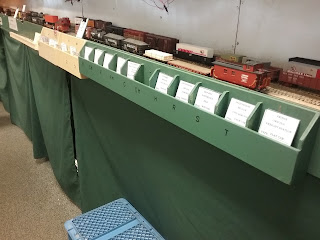 Later at the Huff and Puff,  when we arrived someone had left a box of oils, glues, and electrical parts for us at the door, my neighbor had given us some rolling stock, and Jim brought in boxes of stuff and bundles of milled wood. After sorting through all of these treasures we got down to operations.
With a new set of cards sorted into car types we set up some trains using our car forwarding logic. It became apparent very quickly that we needed more cards with smaller quantities, back to the printer I go. This system worked well for the Trains were had set up. To explain the forwarding logic let's look at a train of just 3 box cars leaving Elsewhere.  The first switch is at Johnson Transfer were we drop off a box car and pick up 1, so we still have 3 box cars, at Jutland we again leave 2 box cars at McKay Fuels and retrieve 2. At Lincoln we swap 3 box cars at Hay Co. leaving Lincoln with 3 box cars we head for Springbank. There we spot a box car at Mutual Grain after picking 1 up. Three box cars are dropped at Zorra Cement Warehouse and 3 are removed. At Wellington we remove and leave a box car at Cullen Mill before dropping our train at the yard with, you guessed it, 3 box cars being spotted there. With all that work completed we best top up our water and coal. The beauty of this system is that we made 6 switching moves, with 6 cards and only 3 box cars. The bad thing is that you are always just swapping cars. Also the cards can get mixed up in the racks. How this will work when we have a switcher at Lincoln is yet to be seen.
Posted by Larry at 8:56 AM