All of the newly wired areas, on the branchline were hooked up and no shorts were detected. Before we jump into ballasting, we should run some trains on the branchline to see if all is well.
The logging spur trestle area received some rock castings and gaps were plastered in. The trestle was adjusted to the new levels, but awaits finishing touches on the scenery behind it, before it can be permanently installed and tracked.
Since members finished up running early a few areas that were not directly on the roadbed, were ballasted, to support them properly.  What I'm talking about is, sometimes the roadbed has small dips of a few inches long and the track naturally finds it's own level. Rather than forcing it down we fill under it with ballast, creating a small fill area. We will start ballasting the mainline, waiting to glue it down until everyone is done running so as not to short out the system.

Rob and Larry installed the fascia on this new section of the branchline.  The dark wood retaining wall will be surrounded by rock castings, but will remain removable to access the track in the tunnel. We will try to get all the fascia up, finishing up the woodwork, so we can clean up. 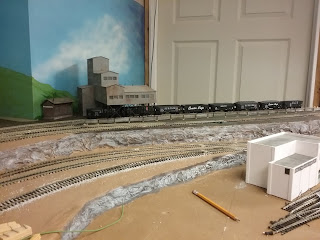 A fence was installed around the coal mine property. 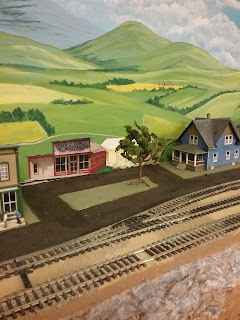