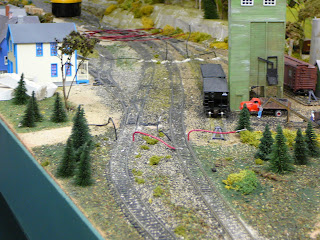 Lots of work on the Miller area. More ground cover added and all the tracks and turnouts cleaned and excess ballest removed. Feeder wires were also added. A test showed much improved operation. 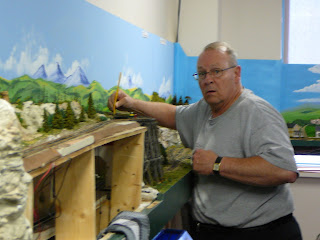 John and Ralph work on the branch 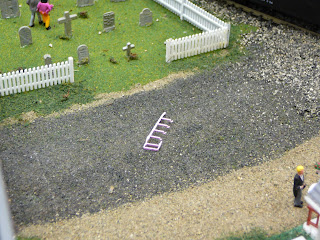 oops, wonder how long until Trent sees this. 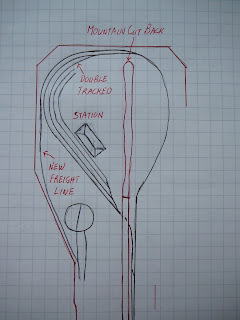 Well we got to thinking about the upcoming changes to Wellington. I will list some problems that have been mentioned. Passenger service in and out of Wellington are poor at best, it would be better if they could get back on the mainline without backing up. It is hard to switch Zorra Cement and the turntable would be better at the other end of  town. What if we move the coal mine to Tuck and then take away the mountain and level the old coal mine area, we don't run coal unit trains anymore in fact we never ran the IN/OUT as designed anyway. Moving the coal mine will not cause down time on the mainline, just some mess. Later Zorra Cement will be moved there with a rerouted mainline going through the middle of the plant? Next we lower the old cement plant area down to the return loop level and expose the loop track and the hidden turnout by removing the end of the mountain, no down time for this step either.  The return loop would be double tracked with 2 sidings to hold passenger trains. The station would sit behind or inside the loop, with a platform across all 4 tracks. The passenger train can just go around the loop and back out on the upper mainline. Town buildings would be put behind the station. This also gets rid of the track ramp up to the cement plant. The mainline for freights into town will be on the aisle side of the turntable, after shifting it over or moving it. All of this will be talked about on work night, see you there.