Brought in some buildings to see how they might fit.  The branchline terminal town, at the loop on the east wall was laid out. First the mainline loop was drawn on the foam board. The radius turned out to be 29 inches not 30 as planned, oops. The various turnouts and structures were positioned several times to get the best fit. It was surprising how easy elements became out of reach. Now looking at the picture, the turntable and engine house may fit better on the lower left of the photo. The spar tree and lumber camp was set in place, after being removed in 1 piece from my home layout. Because of its track layout, the log train will have to go into town and be pushed back into the lumber camp, adding more interest to this switching job. As a line was drawn around this town, it became apparent that a new bench, 5 inches high, should be built to support this upper level. It can then be moved to a table and be completely wired and scenery added before it is set back into place. The tail of the passing siding will go over the mainline on a bridge and disappear into a tunnel. The slope down to the mainline can then be added, finishing up the area. The back side will be left open to get at the mainline at the back of the loop. Things that went into planning this town included, length of the passing siding, being able to reach turnouts and rolling stock, structures not in the way of turnouts or rolling stock,  length of sidings and structure locations, and is still up for revision. 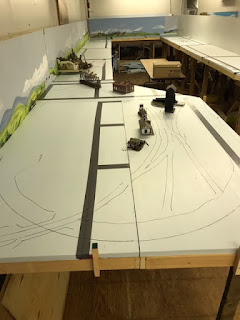 The sawmill was set up somewhere close to where it might go. As far as space goes, it takes up a lot of space, so it's final position is still undecided. 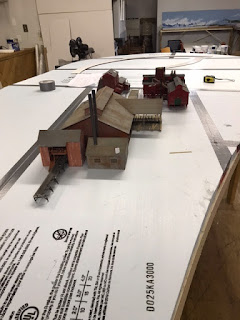